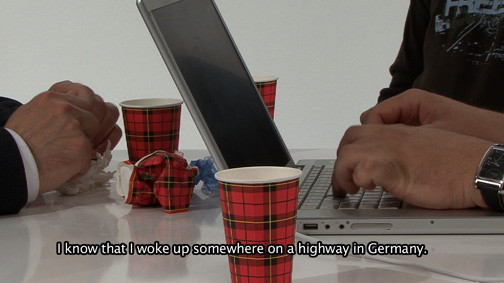 »There is no way of simply going back to espousing the voice as the locus of freedom against the repression of the suffocating mold, and there is no simple way of giving up on mastering social and cultural codes despite their profound complicity with class. There is no voice without a mold, without contradiction, and there is no simple way of getting out of this predicament, the strife which brings together the individual and the social, singular and universal, body and culture, enjoyment and code, saliva and phonemes (...).«
– Mladen Dolar

Circus is delighted to present »Act I, Act II«, Katarina Zdjelar's second solo exhibition with the gallery. For the past years Katarina Zdjelar's research has been exploring notions of identity, authority and community, in which language, voice and speech were considered as tools for negotiation and investigation. Concerned with ideas around foreignness her projects often evolve around individuals, who, confronted with realities beyond their native perimeters, perform through reinventing themselves, while inhabiting regulated systems differently and creating alternatives within them. »Act I, Act II«, a video work in two parts, presents us with a staged real-life scenario, where the protagonist entwines in a meta-level of 'acted' reality and personal narrative. »Act I« shows the interrogation process undergone by an asylum seeker and an immigration officer, in the presence of a simultaneous interpreter. What is not evident at first sight is that all three men are role-players who work together in an agency that provides services to military and immigration organizations. The situation that we observe is fictive, for it involves a fictional story. Following Zdjelar's minimal yet tactile cinematography, that swings back and forth between detachment and intimacy, we witness how, by performing the role, the main protagonist's own identity is being triggered and reinserted into the narrative. It is uncertain when he is acting and when he encounters his real self since the actual and the personal, the social and the individual merge into one persistent narrative. In »Act II«, the same character reappears: A Serbian immigrant, land surveyor by vocation, he decides to become a movie actor, encouraged by his role-playing for the agency. Zdjelar follows the protagonist’s strife for re-invention and ‘a better life’, the auspicious attempt to liberate himself from given structures. Yet again it is not quite clear, whether the character is being performed or whether we are confronted with autobiographical notes. Shifting between reality and fiction, political meaning and cultural cliché, the piece thus resolves in a multi-layered postulation of what is not but yet could be. It draws a sociograph where Zdjelar's humane and nimble approach to criticality proposes a vocal entity to resonate in a collective hearing.

Parallel to the exhibition in Berlin, Katarina Zdjelar will be showing a newly commissioned work at Frieze Film, curated by Sarah McCrory, opening in London October 12th, and will be, amongst others, participating at the 52nd October Salon in Belgrade, curated by Galit Eilat and Alenka Gregoric (opening October 20th).
www.circusberlin.de