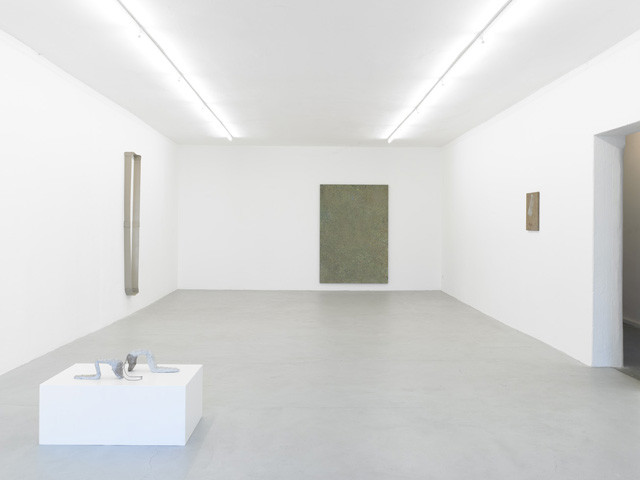 Humans, like animals and buildings, have biological
rhythms that determine when they are active.

However it is said that the rhythms of a building
are more vulnerable to the impact of outside forces.

Humans can hide from the wind but the wind bears
down on the house.

The wind bears down on the house but the human
can hide.

»Patterns of Intention« gathers the work of four artists, orchestrating a lyrical arbitration of space, language and architecture as a metaphor of artistic practice and an implicit mental condition.

The parenthesis of the show is a text-based audio piece ‘Build a wall or be a Room’ by New Zealand born artist Ruth Buchanan. Stretching her practice from sculpture, video and photography to text and performance, Buchanan questions how one speaks as an artist today and what space this voice creates. ‘Build a wall or be a Room’ sounds at first like a reading from an architectural manual. With a lilting voice Buchanan explores the psychology of architecture and the need for shelter, in part by describing how internal systems must hold up to external forces. With an increasing metaphorical quality and humorous sensibility towards language she almost impalpably opens up the dramaturgy from a seemingly technical to an anthropomorphic context.
Ruth Buchanan (b. 1980, in New Plymouth, New Zealand) lives and works in Berlin. Recent solo exhibitions include shows at Casco Office for Art, Design and Theory, Utrecht, and at The Showroom, London. Furthermore her work has been included in group exhibitions and projects at The Stedelijk Museum, Amsterdam and Kunsthaus Bregenz. Upcoming is a solo show at Grazer Kunstverein, Graz, and a group exhibition at Marres Centre for Contemporary Culture, Maastricht.

Jennifer Cohen's work is concerned with the various limits placed on the human body, and how the aesthetic sphere can provide a point from which to explore the body’s containment by – as well as potential release from – those limits. Taking inspiration from choreography and ballet, Jennifer Cohen is interested in formalizing the body’s shape and movement Her sculptures made of materials such as paper pulp, cement, clay, bronze as well as found objects capture moments in which corporeal motion is made static - or vice versa, in which bodily features turn into a kind of animated architecture.
Jennifer Cohen (b. 1970, in Brooklyn, NY) lives and works in Brooklyn, NY. She has had solo exhibitions at White Columns and Salon 94 in New York. Furthermore her work has been included in group exhibitions at Friedrich Petzel Gallery, NY, and Rachel Uffner Gallery, NY. This is the first time her work is being shown in Germany.

Aleana Egan’s artistic process can be likened to a form of intuitive translation through which she generates interpretive responses to her surroundings and literary influences. Being both a reader of material and a writer of form, she creates abstract sculptures of pared down nature and frail tactility, using painted cardboard and tape or thin metal strips. With a careful attention to detail Egan sculpts these commonplace materials into quotations of windows, doors, ceilings and similar architectural semiotics that evoke a sense of the sites that inspired them while intimating the artist’s own inner musings about these sources. Using sculpture to address the ‘beyond speech’ qualities of place and memory while creating an atmospheric sentiment, Egan discloses a constant negotiation between the private self and exteriorized representation.
Aleana Egan (b. 1979, Dublin, Ireland) has shown internationally including solo exhibitions at Mary Mary, Glasgow and Kunsthalle Basel, Switzerland, as well as group exhibitions at the Sculpture Center, New York, Landesmuseum Muenster, Germany, Kunsthalle zu Kiel et al. In 2008 her work was included in the 5th Berlin Biennale. Presently her work is shown in a solo presentation at The Drawing Room, London.

Fredrik Værslev's work seems to exist within the triangle of suburban property: the villa, the garden and the garage. In 2010 he initiated a series of paintings that has loosely been referred to as 'terrazzo paintings'. Driven by a distinct and dynamic process approach to painting Værslev has been experimenting and refining a painterly technique almost echoing the process of terrazzo layering itself: the layering of marble chips, concrete powdering, goat’s milk pouring, water adding, sanding down, reducing, new marble layering and so on. Following similar principles Værslev uses standard industrial spray paint on raw linen as a starting point while then further applying leftover products found in the garage of his parents: house paint as well as corrosion protective spray, lynol, rust remover, fixative, tar and liquid tarmac. Balancing intricate compositional rules and aspects of process painting, the results would leave the viewer with an almost trompe l‘oeil impression of terrazzo, would they not reveal a very personal mark making on the surface that more and more deliberates them from their original source of inspiration. Working mainly outdoors due to the fumes of the sprays, the paintings are in addition subjected to a set of variables beyond control. The outcome may be regarded as two sets of ornaments interweaving with each other: the plain and low-cost ornament of the terrazzo and the ornament of chance. Værslev thus allows the works to balance between description and deviance, making concerns over representation secondary to discussions of ornament in regards to the monochrome painting.
Fredrik Værslev (b. 1979, Moss, Norway) graduated last year with an MFA from The Art Academy in Malmö, Sweden / Städelschule in Frankfurt am Main. Recent and current exhibitions include solo shows at Johan Berggren Gallery, Malmö, and Standard, Oslo. In May Værslev will have his first solo show in Germany at Circus, Berlin; his work will further be included in "Printemps de septembre", Toulouse (curated by Anne Pontegnie) in autumn this year.
www.circusberlin.de