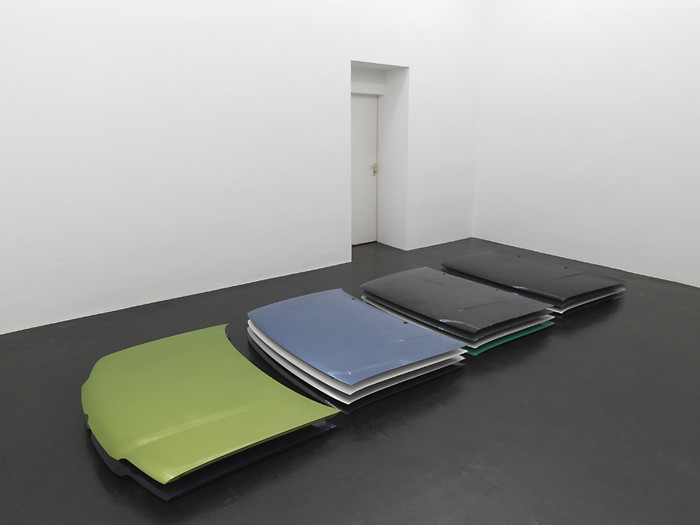 “Whether large or wide or small or narrow, black and white or bright color projected light of the cathode-ray tube or plasma screen – the space of the screen is a virtual space, an elsewhere that occupies a new dimension.”(Anne Friedberg, The Virtual Window: from Alberti to Microsoft, Cambridge, Mass. 2006, p.179)

The story of what happened to an object – even when it becomes visible as a past act – affects the surrounding space. It can still be seen on the surface of the VW Polo and Golf bonnets stacked on the floor in consecutive layers of two, three and four in Monika Stricker’s work The New Men and the Death of Man. The paint on the black and gray, pale blue and green-painted, slightly curved front parts of the small cars appears milky and dull from a filmy, airbrushed layer of dried buttermilk. The patina reveals scratches and marks – traces of the objects’ original uses. The act also manifests as a fleeting movement of sitting down, in the textures on fabric, skin, and the elastic seam, preserved in plaster. Colored pale green and lying in rows on three high, flush wooden pedestals, the reliefs in the second room of Clages gallery show hollow depressions left by human buttocks. Horizontally positioned and visible from the front, the objects expose their surfaces, serving as a type of screen and projection surface for the gestures impressed into them.

Whether industrially manufactured, borrowed parts or things created in a molding process, repetition of completed action and serial reproduction cause the objects themselves to appear as intermediaries, or “mediants” as anthropologist Arjun Appaduraii might describe them: They do not, as he says, exude an aura or theatrical presence; instead they present themselves, lined up in rows, as expanded displays. They are on display. They are not connected to Minimal Art (although the reduced gesture might recall it at first glance), nor do they function as castoff objects or things left to their own devices and other processes, thus sidestepping a mise-en-scène that one finds in Pierre Huyghe’s work for dOCUMENTA (13), for example.ii They should rather, as Fiona McGovern put it with regard to the appropriation of display in the work of artists such as Heimo Zobernig and Thomas Hirschorn, be understood as an artistic practice that moves toward moment of action in exhibition, that privileges arranging, exposure and curating, and tries to distance itself from sculptural, installative placement.iii

The objects do not expose themselves; they only show their origins as found or processed things. They remain frozen in this state, even when their formation remains visible and the stacks and rows, imprints and sedimentation recall a sculptural vocabulary like the one Richard Serra employed in his Hands films, for example (Hands Catching Lead, Hands Scraping, Hands Tied – all 1968). They expose the material, open up the space and provoke the viewer through a certain austerity. They are deadpan – “poker faces” as Stricker puts it. The temporality of completed actions and processes is inscribed into them.

The second, rear gallery room contains the prototype of the backside-plaster casts on a knee-high display along with the video-sound work seven-minute tracking, playing on a monitor leaned vertically on the wall. Shot on a cell phone, the approximately seven-minute sequence assumes the perspective of the objects. Positioned on the seat of a car, the phone captures the movement of a person sitting down as a short disruption to the image and suspense on the screen. The work shows an act to and with the technical device, one that is mainly heard: on screen, the moment of bodily impression becomes a dull, haptic, but elusive sound. Then, after a while, we hear the regular machine-sound of driving in the background, while the screen remains black. Stricker allows us to experience the production process that is palpably inscribed in the plaster works and bonnets in an acoustic way. There is a virtualization of this haptic experience into visual and audio media, a process by which the objects themselves, as mediators, trigger a process and become projection surfaces for further confrontations, with reality and environment, for example. These objects do not become actants. Instead, they facilitate, transform the real and open a space of action – as Johannes Lang noted – due to their production-aesthetic orientation.iv

Factory of Fiction – as both an invented term by the artist and a promise – immediately conjures imaginative and filmic-mental images and functions here as an antithesis to the works exhibited in the rooms of Clages gallery. Artistic skepticism toward objects as moments of departure for spatial and physical confrontation takes effect in the lining-up and duplication of things as feedback: a falling back on itself that voids the aura of the automotive spare parts as readymades, for example, or withdraws the uniqueness of an artistic production through coloring and repeated gesture. What remains is a background noise that preserves the reaction of transformative processing – buttermilk residue as paint binder, gaps and indentations in the plaster – and, from this act of processing, visualizes and virtualizes what has not been seen before.

i This refers to the materiality debate Arjun Appadurai builds onto Bruno Latour’s Actor-Network-Theory (ANT). Like Latour, Appadurai sees mediants as entities with agency or the power to act, and sees this category as encompassing objects, humans, the living and animated matter to an equal degree. For Appadurai, however, the emphasis is on the relations between various mediants and their media. See the lecture “Humans, Materiality and the Future of Shared Agency,” as part of the “Global South” workshop, University of Cologne, 2015.