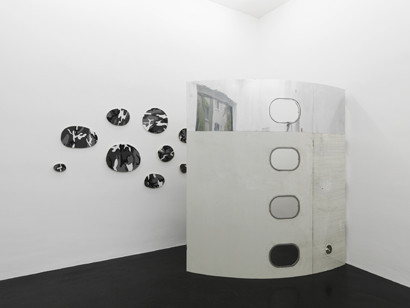 “Then I’m out of here!” or so the surfer magazine “surf” titled this year’s November issue. Flipping through the pages, the magazine does actually send the reader on a mental journey, its full-page photographs suggesting the existence of paradise on earth.

Rather than embrace a conceptual or art-historical strategy, for "IN SITU" (the artists’ first group exhibition together at Galerie Clages) Owen Gump, Mikhail Pirgelis and Bernhard Walter play on exactly these associative, faraway spaces.

Looking at Owen Gump’s photographs, one thinks of a newly discovered paradise once thought to be lost. A surfboard, tropical plants and breaking waves lead the viewer to believe that the Cologne-based artist, born 1980 in California, has taken his environment in situ – in other words in that place – in its original state and natural surroundings. For Gump, photography serves as a means of indicating the conflict between association and reality, for none of his works were made in Polynesia: Gump’s interest in areas of the Pacific has led him to botanical gardens, ethnological museums in Berlin or to find elements in vintage photographs simulating the idea of a place that is not directly identifiable. Its paradisiacal existence is based on the image it has developed through selective representation that can be reproduced anytime, anywhere and thus exists exclusively in an associative, in-between zone.

Michail Pirgelis’ art deals with the de-contextualization of aircraft, as they are subject to the archeological process of searching, finding and preparing – which is where the term in situ originally comes from.
www.mariettaclages.de