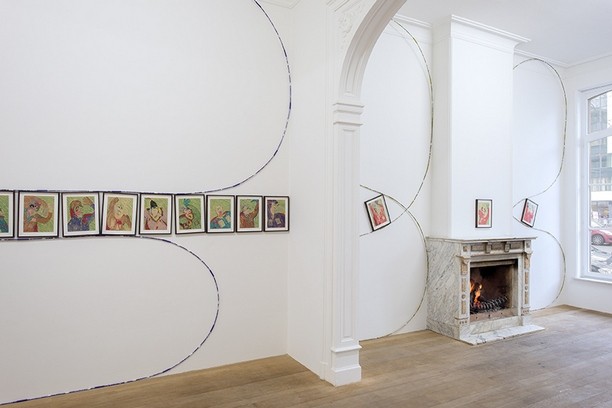 C L E A R I N G is pleased to announce the first exhibition pairing the work of Los Angelesbased artists Calvin Marcus and Chadwick Rantanen. For the show they will present a selection of drawings and sculptures engaging in a practice of making, oriented around meticulous material studies and the aesthetics used to organize individuals. The works are indirectly yet appositely augmented as a result of this exchange through the allied themes of containment and uniformity.

The ground floor of the exhibition features small-scale crayon drawings of war-ravaged soldiers lying in grass by Marcus and tubular, looping vitrines containing healthcare fabrics by Rantanen. Rantanen’s sculptures use the walls of the gallery and the wooden frames of Marcus’s drawings for structural support. The vulnerable forms of Rantanen’s loops adopt the guise of their surrounding soldier imagery to elicit readings of expanded drawing and figuration. The uniforms of the soldiers and the healthcare uniforms in the tubes foster a utilitarian approach to design under the consciousness of human wellbeing, containing symbols, colors and motifs for the identification and categorization of people; their nationalities, borders, rank
and occupation.

The upper level of the gallery contains equally sized, portrait-oriented drawings of grass by Marcus exposing the absence of the dead soldiers. Around them Rantanen has placed bundles of weathered aluminum poles with a variety of printing calibration images of color swatches, gradients and photographs of skies sublimated into the surface. Both sets of work stretch from one room to the next implying an expansive, evacuated field punctuated by condensed landscapes reduced to solid color.

Calvin Marcus (b. 1988, San Francisco, CA, USA) lives and works in Los Angeles. In 2015, his work was the subject of solo exhibitions at C L E A R I N G in New York and at Peep-Hole in Milan. His next solo show will take place at David Kordansky Gallery in Los Angeles in January 2016. Recent group exhibitions include Tightrope Walk: Painted Images After Abstraction at White Cube, London and Works on Paper at Green Naftali, New York.