Bourgeoisie, Swing and Molotov Cocktails Amerika Haus through the ages 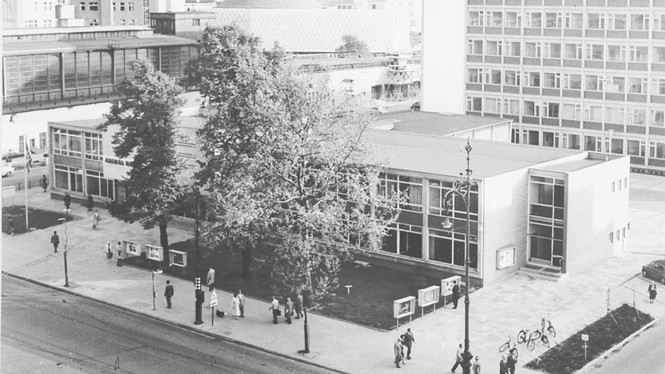 From 13 July to 15 September 2013, C/O Berlin will present the open-air exhibition Bourgeoisie, Swing and Molotov Cocktails with photography on the theme of Amerika Haus through the ages. The opening will take place on Friday 12 July 2013, at 7pm in front of the Amerika Haus in the Hardenbergstraße 22-24, 10623 Berlin.

Millions of Berlin residents sought information in the library or at the screenings. Robert Kennedy, Richard Nixon and Willy Brandt visited. Eggs and Molotov cocktails were thrown at the building and it was secured with barbed wire. Lyonel Feininger, Robert Rauschenberg and Gordon Parks exhibited their works here – the Amerika Haus in Berlin is much more just than an architectural treasure from the 1950s.

The changeful history of the twentieth century is reflected in the immediate vicinity. Until 1945, the area in the Hardenbergstraße accommodated a Prussian officer's club, a wild amusement boulevard and gloomy exhibitions of National Socialist art. Following the Second World War, the light-flooded, filigree Amerika Haus was for 50 years a point of divergence for cultural and political discussions and international controversy between peaceful re-education, western propaganda and fervid anti-American sentiments. In the exhibition showing historical photographs, C/O Berlin will for the first time document the location and its environment, which has undergone rapid changes overs the last 150 years – a local urbanization that is also symbolic of the developments in Berlin as a whole.

First came the animals – in 1844 the Zoologischer Garten (Berlin Zoological Garden) was opened at the edge of the Tiergarten park and initially extended as far as the Hardenbergstraße. In the 1870s, work began on the construction of the city railway and in 1884 the station Bahnhof Zoo was opened. This made the neighbourhood appealing for a wide range of different new user groups on a long-term basis. On the site where the Amerika Haus would later stand, a master builder and an investor built a baroque villa. In addition, the area was enhanced by middle-class amusements such as a riding hall, a theme-based exhibition, a triumphal arch, panorama views and a skating rink. In 1899, modern art came to Charlottenburg. The art association "Berliner Secession", which included Max Liebermann, Max Slevogt and Lovis Corinth, moved into a building next to what is today the Theater des Westens (Theatre of the West).

After the First World War, the villa was sold to an officer's association. The Hardenbergstraße did not remain just a residential street – it became livelier and more urban. Amusement, bars and night-life were the way of the future. In 1926, the officer association building was renamed and became a cabaret and dance venue, "Villa d'Este". In the golden twenties, on the site where the Amerika Haus was later built, the Berlin residents danced to their heart's content. In the 1940s, there was Nazi art instead of swing music and the "Berliner Kunsthalle" (Berlin Art Exhibition Hall) was built. At least ten exhibitions of Nazi art were held here – photography from Mussolini's Italy, Croatian photographic art and large portraits of political greats from the Third Reich, taken by Hitler's personal photographer Walter Frentz.

At the end of the war, the villa d'Este was destroyed, together with the Kunsthalle. At the beginning of the 1950s, US allies discussed the idea of building Amerika Haus on this site – to intentionally provide a counterbalance to the location's Nationalist Socialist past. Initially, Walter Gropius was to design it, however he withdrew due to financial disagreements. As a result, the contract was awarded to the Berlin architect Bruno Grimmek, who had already built the Marshall Haus by the trade fair. Since 1957, Amerika Haus has housed a library specializing in US literature and magazines and has offered an extensive cultural programme including films, theatre, English courses and concerts. In the beginning, it was also a place for the re-education of the Germans during the time of the Berlin wall, and an institution for anti-communist propaganda, and since the 1970s it has increasingly become an ordinary, regionally-orientated cultural centre.

At the end of the 1950s, Amerika Haus attracted more public attention, as the protests against the "American Imperialism" began here with demonstrations by the FDJ (Freie Deutsche Jugend, an organization for teenagers in the GDR). In 1966, the first anti-Vietnam demonstration headed for the building. For the first time, eggs were thrown at the façade – at later demonstrations it was stones and incendiary devices. The student demonstrations were followed by letters of apology by the rector of the Freie Universität to the US citizens and counter-demonstrations by the CDU. In the course of the anti-American protests since the 1960s and following the terror attacks on 11th September, Amerika Haus closed itself off more and more, becoming a fortress. US institutions increased their security measures to such an extent that only invited guests could visit the building – behind high fences, with rolling grilles in front of the windows and security doors. At the latest when the new American embassy opened at Brandenburger Tor and the ownership of the property was transferred to the state of Berlin in 2006, Amerika Haus fell into a deep slumber.

Amerika Haus is currently being carefully renovated. The opening of the building is planned for spring 2014. C/O Berlin will present the first exhibitions as early as summer 2013 – while the building is still being refurbished. However, not in the Amerika Haus building itself, but open-air, in front of the building. 24 hours a day, seven days per week and accessible to everyone free of charge. In the upcoming months, on a large number of displays, C/O Berlin will present photographs that deal with the theme of the new location, the surrounding environment and the neighbours – a visual intermezzo that will last until the building is reopened.