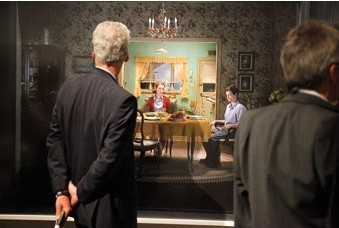 Anonymous American suburbs. There are homes strewn with garbage, streets devoid of life, train tracks overgrown with weeds, and fallen-down houses engulfed in flames. The traces of industrialization and civilization appear as ruins. Nature has taken over—but these places are neither idyllic nor romantic. People are shown almost impassively stumbling through menacing landscapes without any sense of orientation. They avoid meeting each other’s gazes, not reacting to this apocalyptic speechlessness. Although no immediate violence can be seen, its presence is palpable everywhere. Emptiness, loneliness, stasis, paranoia—the elaborately staged photographs of Crewdson turn the darker sides of the American dream inside out, enacting a fine line between normality and horror.

In contrast to the classic thriller, Crewdson’s detailed tableaux from the series Beneath the Roses depict people who are making no effort to change anything, to defend themselves, or even to save their own lives. Resigned to the mysteries of everyday life, they are left indifferent and empty; they seem as if they are on automatic pilot. The hyperrealism of these images makes the all-encompassing sense of alienation that pervades them all the more vexing and disquieting. It unmasks the middle-class American lifestyle and the typical suburban idyll as hellish nightmares. Crewdson’s focus is not on social mobility but on the spiritual abysses that are repressed from consciousness. In his enigmatic photographs, the uncanny is neither new nor strange, but familiar—as close as next door.

Crewdson’s large-format photographs are staged antinarratives. The beginnings and endings of the stories lie outside the narrative frame, leaving events in a permanent state of limbo, forever unresolved. Each clue to the content leads to further questions. Embracing this broadly conceived approach to the art of narrative, Crewdson carries on the tradition of staged photography that emerged as one of the most important forms of contemporary photographic expression since Cindy Sherman and Jeff Wall. His work is also strongly influenced by the visual cosmos of the Hollywood film, particularly the themes and imagery of David Lynch and Steven Spielberg.
www.co-berlin.com