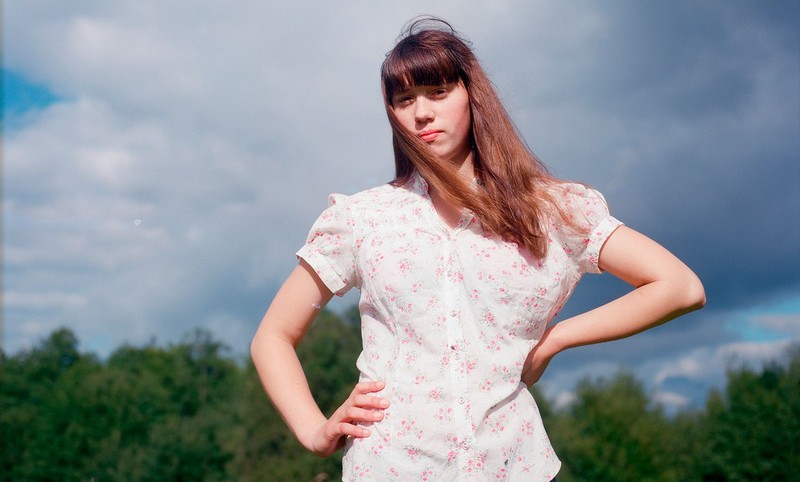 Pilcene, Latvia. A small village, which seems forgotten by time. A place that evokes our own memories, even if we have never been there. Crystal clear lakes, huge bales of hay, fly agaric in woodland clearings, wooden huts covered by deep snow, colourfully decorated living rooms and their inhabitants. In the photographs by the Latvian photographer Iveta Vaivode, the main focus is not only on immediacy and accompanying documentation but also on the intentional portrayal of a specific ambience—a very natural, life in the countryside, one that scarcely exists today. So idyllic that the images appear almost orchestrated. This is not the case, however the artist does stage her photographs with a specific intention. In doing so, she adds a new layer to classic reportage photography—Iveta Vaivode’s photographs go beyond pure documentation, becoming soothing, magical, fictive, like fairy tales, as well as a symbol of the transience.

Iveta Vaivode journeyed to the home of her own family that she herself had not visited before. The artist regularly makes a visual excursion into what is both unfamiliar and familiar, without a preconceived order or formal criteria, only with an open, curious gaze. Hence, the individual, quiet portraits, calm interiors and poetic landscape photographs are a long-term, ethnographic study being carried out in this remote area of Europe. In an age that is constantly speeding up, the exotic and the unfamiliar can be found in the immediate neighbourhood. The photographs not only convey an almost archaically slow pace of life but also the slow development of the series itself. This is because Iveta Vaivode, who was an outsider to life in the village, had to work on gaining the trust and openness of the protagonists little by little. It is not until this point that she is able to show the rare insight into a closed society in the tradition of the classical documentary style of photographers such as Josef Koudelka, Joakim Eskildsen, Walker Evans and Robert Frank.

The camera serves to pave the way for and inspire human encounters and hence for Iveta Vaivode photography is entirely subjective. In contrast to pure documentary photography, these works are about the author herself and not about individual processes or events. Iveta Vaivode extends the medium of photography, in order to express her own visions and phantasies. For her, photography is not just a method for capturing something, in order to remember it later; it is also the conscious act of questioning mechanisms of remembering, between reception and construction.

Iveta Vaivode, born in 1979, graduated in 2008 from the Art Institute of Bournemouth (GB) and is currently completing a Masters in photography at TaiK (Aalto University School of Arts, Design and Architecture) in Helsinki. In recent years, Iveta Vaivode has dedicated herself to photographic essays, created over a longer period of time, in order to approach her subjects in more depth. Her photographic works deal mainly with the presentation of rural communities in the eastern part of Latvia, called Lattgale. Iveta’s photographs have been exhibited in Latvia, Lithuania, Great Britain, France, China and Belgium. She was awarded the following prizes: Nikon Discovery Award (2008), FreshFaced+WildEyed (The Photographers Gallery, UK) and the Burn Magazine Grant. Iveta Vaivode lives and works in Riga.

Jule Hillgärtner, born in 1978, obtained her doctorate on war reporting in embedded journalism while on a scholarship of the DFG Graduiertenkolleg (DFG graduate programme) “Zeiterfahrung und ästhetische Wahrnehmung” (the experience of time and aesthetic perception) at the Goethe University Frankfurt. She has worked at the Museum für Moderne Kunst Frankfurt since 2001, has been teaching the theory of photography at the Hochschule für Gestaltung Offenbach since 2009 and writes for the “Album, Magazin für Fotografie”. She has realized exhibitions for F-Stop Leipzig (2010), RAY Fotografieprojekte Frankfurt/RheinMain (2012), at Frankfurter Kunstverein (2012/13) and the Akademie der Künste Berlin (2014).
www.co-berlin.com