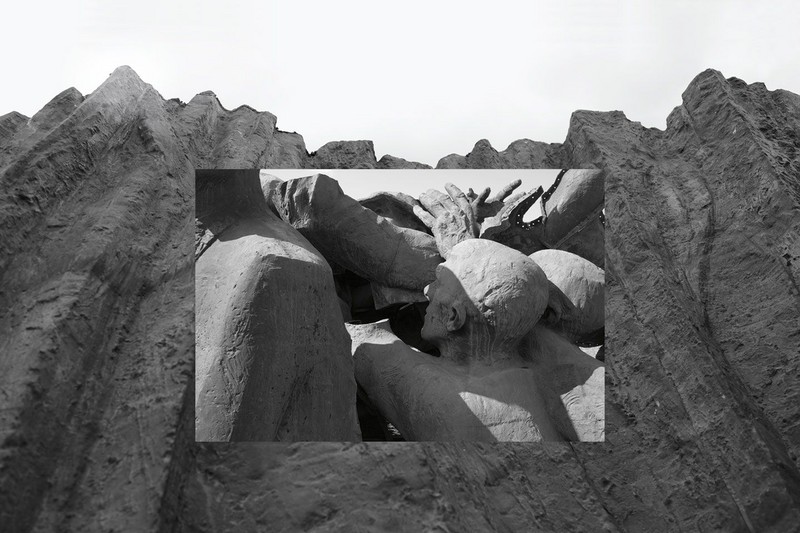 “No respite, history is being made. Forgetfulness is spreading. We’re making progress!” Fehlfarben, German pop band

Banished heroes, empty pedestals, abandoned squares, demolished memorials—the cities of the former East Block are full of the traces of bygone utopias and political and social transformation. The erstwhile heroes of communism were desecrated, and the once shining idea of socialism was quickly laid to rest. What remained in everyday life were gaping holes in the cityscape, architectural ruins, and urban scars. What was eliminated from the image of the city? What was brought into the present—and why? In Lives of the Unholy, photographer Pijarski offers a visual archaeology of the city of Warsaw. Over the last few years, he has explored the city of his birth and documented diverse sites to study the destruction of Polish monuments during the period of political transformation from various perspectives. Pijarski’s aim is less to find out where the monuments have ended up and what fate has befallen them and the heroes they portray than it is to reveal visible and invisible processes of political transformation. It is a search for traces of history aimed at bringing to light what has been repressed, discarded, and forgotten, and at making the invisible visible. Using his photographs of public squares in the Warsaw of today, together with pictures he has taken of archival material, he creates montages that visualize the different temporal strata and reveal what once was—in its present-day absence. What has emerged in this process is an archive of places in which the aesthetic of disappearance has engraved itself into the physical, symbolic fabric of a city.

Over the course of history, periods of rebuilding, restoration, and starting anew alternate cyclically with phases of decline, destruction, and collapse. Turns of the ideological tide are manifested in the demolition of monuments and memorials to the preceding historic period and social order, and in efforts to wipe away that period’s traces. These are the expressions of a society’s defense mechanisms against the unbearable idea of its own history. They are executions without a trial, and they become symbolic means of redressing the wrongs done to a “violated” society. To be able to keep going after a crisis, a society begins almost immediately to discard its own past, and it does so as thoroughly as possible—consigning whole epochs to a footnote in history.

Krzysztof Pijarski focuses on the fractures, wounds, and discontinuities to open up a clear view of what lies in between—an unusual and important perspective that provides a more complete picture of the whole. He explores a zone of transition where the foundations of a society are disintegrating but the new has not yet been established. It is a kind of interregnum in the process of social development, where the central sites are literally vacant, waiting to be occupied anew. In this way, Pijarski reveals that history is merely a montage of the present, and that the way a society deals with history says a great deal about its present conditions. The disappearance of unpleasant memories and the phantasms of a past time lead not only to a dehistoricization but also to a de-realization of the past—the temporary extinguishing of a collective identity.

Krzysztof Pijarski’s photographic tableaux create visual, historic stages on which different times and spaces come together and remarkable layerings of time and space emerge. His complex strategy of mediation, drawing on memories, temporal juxtapositions, and spatial arrangements, lends form to material he has collected over the course of many years. To these constellations of images he adds legends that provide historic background and offer hints as to how the tableaux should be read and what aspects should be considered when looking at the pictures and particularly at the arrangements. Pijarski works not only with temporal juxtapositions, but also with various techniques of spatial overlap. He arranges diverse perspectives of a place side by side, allowing them to overlap and interpenetrate one another to such a profound degree that they seem to merge into a single perspective, melting together almost organically.

Krzysztof Pijarski, born 1980, studied photography at the Academy of Arts in Poznan and graduated with a Master’s degree from the Polish National Film, Television and Theatre School in Lodz, where he is now teaching. He also completed a doctorate on the theme of “The Archaeology of Modernism. Michael Fried and the Experience of Modernism in Art”. His works have been exhibited in Salzburg, Warsaw, Krakow, Poznan and Prague. He is also editor of the magazine View. Theories and Practices of Visual Culture. Krzysztof Pijarski lives and works in Warsaw.

Annika K. Kuhlmann, born 1985, studied International Relations und Photography at the Columbia University New York and graduated from the Berlin University of the Arts with a specialision in Media Theory. She is writing about contemporary art and theory and is regularly working for the HKW (Haus der Kulturen der Welt), where she conceived, together with Boris Buden, the Learning Place for FORMER WEST: Documents, Constellations, Prospects (2013), and realised the exhibition Eine Einstellung zur Arbeit. Ein Projekt von Antje Ehmann und Harun Farocki (2015). Annika K. Kuhlmann lives and works in Berlin.
www.co-berlin.com