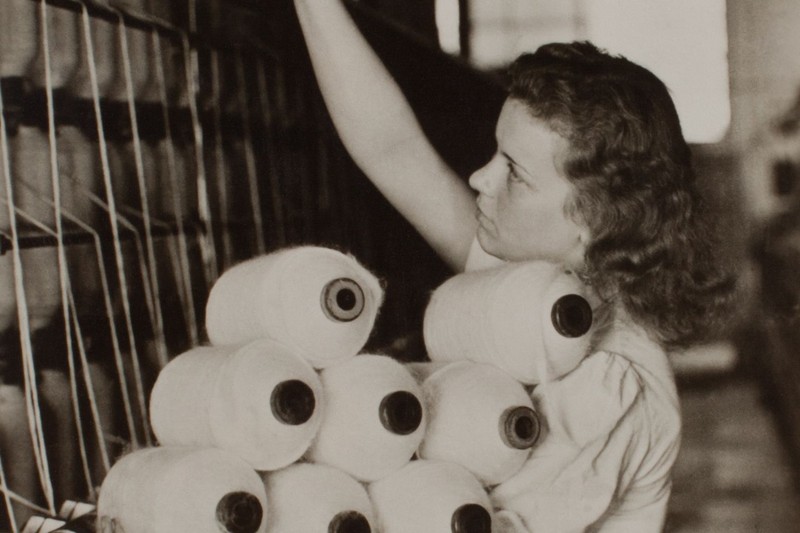 Proud activists, completed annual targets, vacation greetings from the GDR, illustrious workers’ collective celebrations, Vietnam collections, and friends from Mozambique—Socialist workers’ brigade journals give a unique insight into everyday life of normal working people in “real existing Socialism”. These historical documents show, in words and pictures, how workers’ collectives developed, at the intersection between government-ordered depiction and mundane, private events. Emanuel Mathias selected around 50 pages from 85 Socialist workers’ brigade journals kept by workers at the Leipzig cotton mill between 1961 and 1989, then modified and recombined them anew. Using this special form of historic reappraisal, the artist questions how archival and historical documents function in defining individual and social identities. How does memory work? How is the past constructed? How does collective memory emerge?

Alongside the family, brigades and collectives were of enormous political and ideological importance in the GDR. Almost without exception, adult citizens were embraced by these organizational units. Keeping brigade journals was not voluntary but obligatory. The aim was to preserve and promote social and societal relationships and to incorporate the individual into larger state policy. The journals present highlights of these work groups, their achievements and problems—in most cases chronologically, unsystematically, but in a logically structured way. A semi-public and semi-private enactment that reproduces the socialist social myth. When the GDR came to an end in 1989, there was a deconstruction of a national identity with all its stories and social codes—a destabilization of a cultural memory.

In the series Art, Freedom and Lebensfreude, Emanuel Mathias appropriates this historic material and compiles a kind of space for memory in which the viewer is confronted with set pieces from the GDR past. In its content, the work addresses three larger themes that are closely interlinked: archive, memory, and photography. Formally the work consists of three parts. For the first, Mathias selected individual pages from the Brigade journals, reproduced and matted them. By isolating the images from their original context but maintaining their position on the page, he stages them in an altogether new way but without losing the connection to the original material. For the second part, the artist took ten excerpts from disciplinary warning latters and had them embroidered onto cotton cloths. He maintained the handwriting and the colors of the original text passages.

Emanuel Mathias has thus developed a new way of engaging with historic material that counters the process of repression and forgetting. At the same time, his work itself assumes the form of an archive and employs an archival aesthetic to study how memory is constructed: namely, in reliance on archives and the documents they contain. Each image in the series bears its own apparently scientific, objective caption. Yet the artist takes the logic of the caption to an absurd extreme. References remain vague, disconnected, and fragmentary—like archives, and like the process of remembering. The subject matter of the photographs is ultimately meaningless; the photographs are purely aesthetic objects that confound, evoke associations, and expose ruptures. The viewer projects her own ideas onto these artifacts and invests them with emotional meaning. The reconstruction of the past thus presents itself as a toolbox for the viewer’s own imagination.

Emanuel Mathias (b. 1981) studied photography under Timm Rautert and Christopher Muller in Leipzig. After graduating with a Diplom degree in 2009, he studied as a Meisterschüler (master student) under Tina Bara, completing his studies in September 2011. He has participated in a number of exhibitions since 2003, most recently in Kino und der kinematografische Blick (cinema and the cinematographic gaze) at the MEWO Kunsthalle Memmingen and Gold (solo exhibition) at the Galerie M2A, Dresden (both in 2013). He spent several months of 2011 and 2012 in Istanbul, Turkey with financial support from the IFA and the DAAD. In 2011, he received the Marion-Ermer Preis and in 2013 the SYN Award from the SYN Foundation in cooperation with the Bauhaus Dessau Foundation. In connection with the latter, he spent three months at the Bauhaus. Emanuel Mathias lives and works in Leipzig.

Sabine Weier (b. 1980) studied media and communication, English, and Spanish studies with a focus on media theory and visual studies. She has been writing about contemporary art as a freelance journalist and author for several years. She has reviewed international art events for diverse magazines and newspapers and contributed art criticism to festival blogs, including those of Transmediale and Tanz im August. She also writes essays for publications and exhibition texts for institutions such as the Schirn Kunsthalle in Frankfurt. Sabine Weier lives and works in Berlin.
www.co-berlin.com