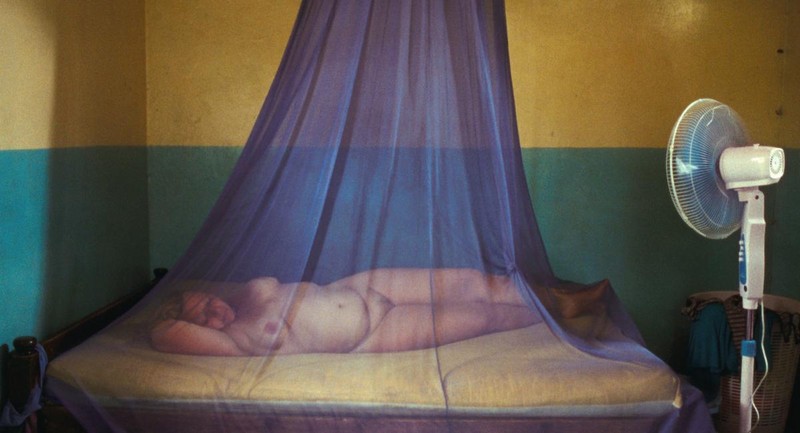 “I love to take pictures very close. To show people in their unadorned, natural form. For me, something like beauty can be found in particular where someone has not been prettified.” Ulrich Seidl

Sexuality, spirituality and physicality – three women in one family seek to satisfy their deepest longings in different ways. The mother as sex tourist, her sister as a missionary catholic and the daughter as a teenager in a diet camp. In his cinematic trilogy “Paradise”, Ulrich Seidl portraits the lonely and the ugly, the outsiders and the deformed of our society with radical open mindedness, as well as their attempts, doomed to failure, to break free of unequal power games, claustrophobic closeness and social constraints. In impressive, photographic tableaus, the director looks at the bodies of the protagonists in the same way the painter Lucian Freud looks at his models. In fact his reduced images are orchestrated right down to the last detail, which forms a strong contrast to the vulgar motifs. The exhibition presents the most spectacular stills from the trilogy, between voyeurism and compassion, tragedy and comedy.

The film “love” is shot on the beaches of Kenya, where the 50-year-old Teresa joins other aging sex tourists, looking for love. She goes from one beach boy to the next, from one disappointment to the next. On the beaches of Kenya, love is a business. In the chamber play ”Faith”, Ulrich Seidl examines what it means to take up one’s cross. For Anna Maria, radiographer and Teresa’s sister, paradise is where Jesus is. During her holidays, she is a fanatic missionary with her travelling virgin mother statue while at the same time engaging in a marital feud with her estranged Muslim husband. In the final part, “Hope”, Ulrich Seidl tells of Melanie’s stay in a strict diet camp for overweight teenagers in the Wechselgebirge mountains, where she falls in love with a doctor, the director of the camp and 40 years older than her. She loves him with the exclusivity of a first love and in her innocence wants to seduce him. However, the doctor fights against the guilt of this love, knowing how impossible it is.

C/O Berlin will present an exhibition of the works of Ulrich Seidl for the first time, with approximately 60 stills from the trilogy. At the same time, a publication will be issued by Hatje Cantz, which includes texts by Elfriede Jelinek, Marina Abramovic, Helene Hegemann and Ulrich Seidl.
www.co-berlin.com