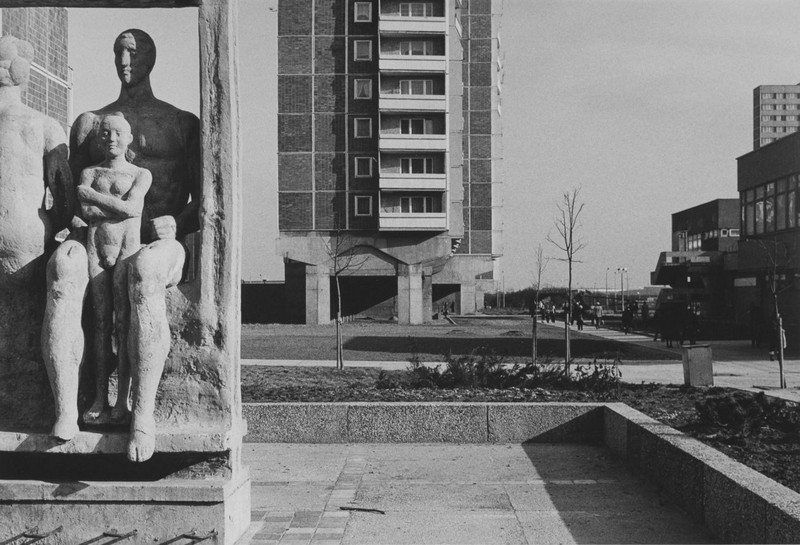 A woman in a long coat and two men in short leather jackets stand looking out at the open sea holding bags and suitcases, their trousers rolled up and their bare feet in the water. How did this trio end up here? Who are they waiting for? Are they traveling or fleeing? This erratic scene is exemplary of Ulrich Wüst’s series “Late Summer” documenting East Germany around the time the Wall came down. In these photographs, unmediated interiority meets absolute exposure. This quiet collision gives rise to absurd, apparently unconnected situations whose narrative openness challenges viewers to explore their own associations. Ulrich Wüst’s analytic, purist black-and-white photographic cycles narrate his own personal experiences in times of massive transition and simultaneously comment on a significant chapter of German history.

Ulrich Wüst is a cool observer of his time with a contentious relationship to social and political contradictions. Everyday absurdities stand in direct contrast to the collective emphasis on public life that played an important part in socialist ideology. His photographic series created over long periods of time document the absence of civil society in East Germany and explore the collective feeling of privacy and its culmination in emptiness and futility.

Wüst’s photographs of artistic and public events, of friends and family, and of everyday objects are both personal diary and historic document. Ulrich Wüst’s photography follows a clear visual principle. His compositions are thoroughly articulated, thought out down to the smallest detail, and influenced by a clear architectural sensibility. A defining quality of his work is the dialectic between ostensible objectivity and a precise attention to detail that is both subjective and subversive. The photographs are intimate in subject as well as scale, and Wüst presents them in the form of handmade leporellos—a format that is designed for personal use and recalls the souvenir albums of the nineteenth century.

As Ulrich Wüst was one of just a few artists who created an East German photographic identity, his work raises questions about art practice in an authoritarian state. East German art practice was subject to tight government control, which limited the diversity of public exhibitions, and Ulrich Wüst was constantly moving in and out of official culture. He was always exploring and pushing boundaries, and—as is often the case for artists—this led to trouble, scandals, and censorship under prevailing, in part grotesque regulations. His works were rarely shown outside East Germany prior to reunification. East German artistic production and photography in particular was long judged only by its own standards, but today it is viewed in a larger historical and international context. The work of Ulrich Wüst should thus be seen in the context of renowned American photographers like Lewis Baltz, Ed Ruscha, and Stephen Shore.

In this exhibition, C/O Berlin will be presenting 80 photographs, some never previously shown, as well as original leporellos by Ulrich Wüst for the first time in Berlin. It will feature his three photographic series “Cityscapes”, “Late Summer” and “Peripheries”. The exhibition was curated by Felix Hoffmann. With this exhibition, C/O Berlin is presenting another East German photographer who is making an important contribution to contemporary German photography, following on previous exhibitions of Roger Melis, Gundula Schulze-Eldowy, and Sibylle Bergemann. A facsimile of Ulrich Wüst’s handmade leporello “Spätsommer” from 1989 will be published by Kehrer Verlag to accompany the exhibition.

Ulrich Wüst, born in 1949 in Magdeburg, GDR, studied at the Bauhaus University College of Architecture and Civil Engineering in Weimar from 1967 to 1972. He moved to East Berlin in 1972, where he worked as an urban planner up to 1977 and as a picture editor up to 1983. He began working as a freelance photographer in 1984. In the mid-1980s, he was one of the most important photographers in East Germany. Ulrich Wüst’s work has been shown in Fotomuseum Winterthur, Berlinische Galerie, Neues Museum Weimar, Leonhardi-Museum Dresden, and the Los Angeles County Museum of Art. His photographs are in the collections of the Berlinische Galerie, the Deutsche Genossenschaftsbank, the Art Collection of the German Bundestag, the Berlin State Museums, the Museum of Prints and Drawings Berlin, and the Staatsgalerie Stuttgart. Ulrich Wüst lives and works in Berlin and in Schönhof, Uckermark.
www.co-berlin.com