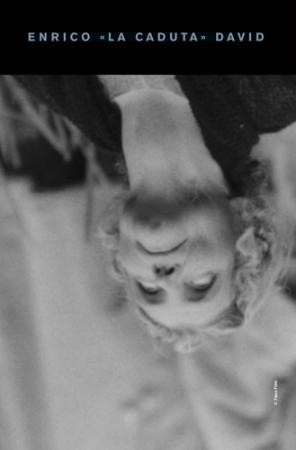 This exhibition by Enrico David is composed of three works: a large painting and two sculptures. The painting depicts a figure – perhaps a woman – emerging from or disappearing into a nebulous magma. It is set apart from the wall and held up by two vertical metal components, acting as a backdrop for the “unfinished” figures of the two sculptures. One of these is hung from the ceiling on cables, floating in space as if to deny its specific weight. The palette is made up of muddy, mould-like colours, and the form seems intended to suggest the remains – or the preambles of a body. The head, arching back, extends into vague, tendon-like filaments evoking bundles of nerves, fibres, connective tissue. The other sculpture rises up from the ground in high relief, enclosing a figure caught within a grid from which it is struggling to break free. The object has the ambiguity of a drawing, of graffiti etched into a structure intentionally made to resemble a piece of rubble or a ruin, hinting at a surface whose form may be linked to some past use. Both sculptures are clad in Jesmonite, a material that the artist began experimenting with in 2014: harder than plaster, weighty and solid, it can be polished, painted, and “treated” with great flexibility, making it well-suited to the concept of transformation that underlies David’s works.

The mise-en-scène for the Collezione Maramotti exhibition has no explicit narrative, but the way in which the objects exist in relation to each other – and interact with space – yields a context that can be narrated to the viewer.

In Enrico David’s works, the impermanence of the image is a state of transition between disappearance and reappearance. Corporality is always present in his work, even when it seems to be denied any well-defined form. Figures collapse, are transformed and multiplied; they are paradigms of fall and rebirth. His practice is guided by a constant reflection on the lack of unity, by a struggle between diverging forces.
The transformation into disorder that ensues from a range of physical and mental states is a condition that the artist senses and explores with expressive urgency. David himself describes
his works as “on the verge of not being ready to be born”, in a process he defines as “wayward dispersion of the stream of unconsciousness”.

Enrico David works in painting, sculpture, and installation, sometimes employing traditional artisan techniques. Drawing is of prime importance, as a point of departure for the creation of works and as a work unto itself. The same variety found in his choice of media also applies to the subjects of his works, which come from many different sources and express a wide range of complex emotional states. David’s imaginary draws on crafts, folk art and design of the nineteenth century, as well as advertising, fashion, and art history (from Surrealism to Expressionism, Art Deco to the Japanese tradition of figure painting). The artist himself explains why: “My work has never followed a uniform method, because I think we are all always struggling to some degree, trying to come to terms with our fragmented, contradictory nature. But I find that the encounter between these different elements, these different forms of expression, somehow renders that discontinuity”.
www.collezionemaramotti.org