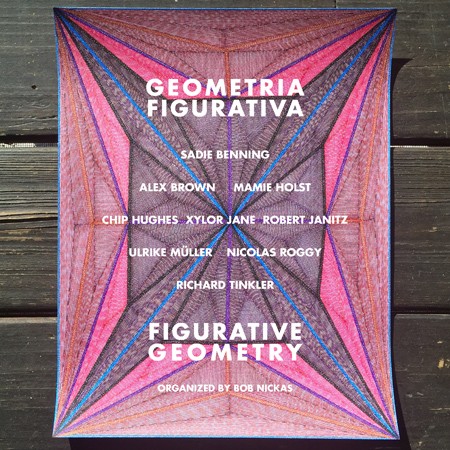 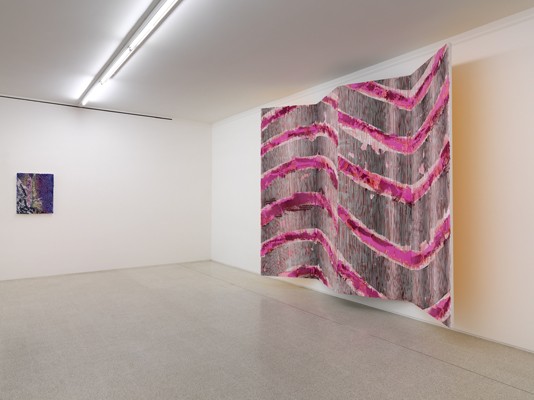 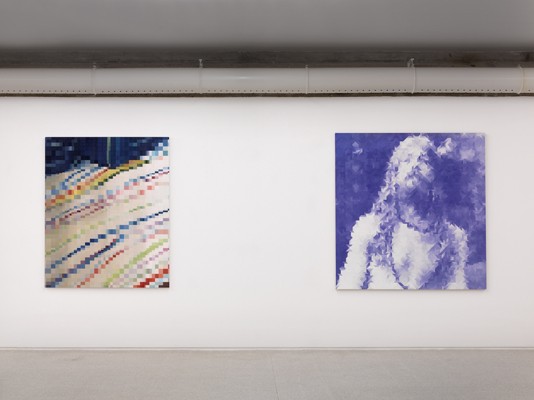 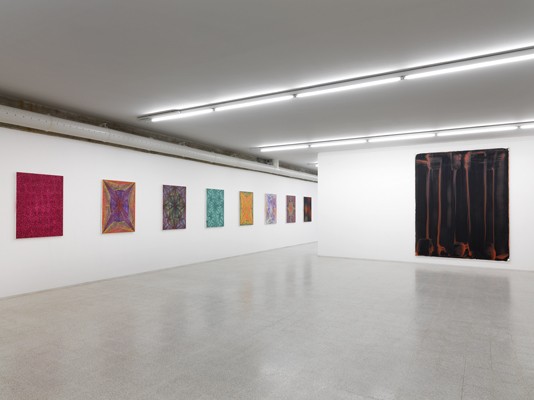 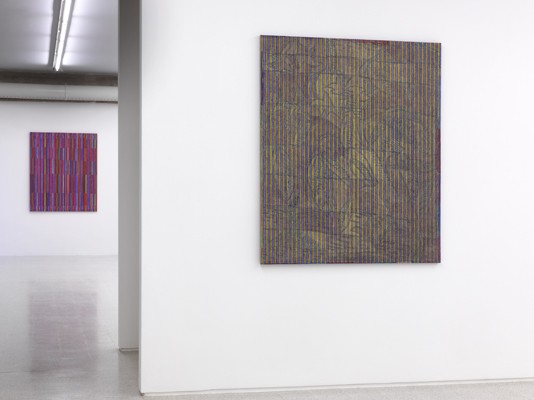 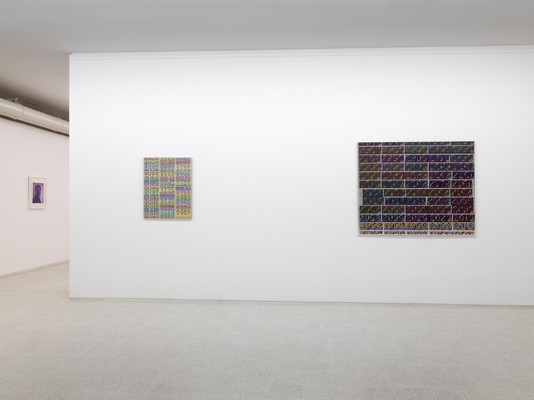 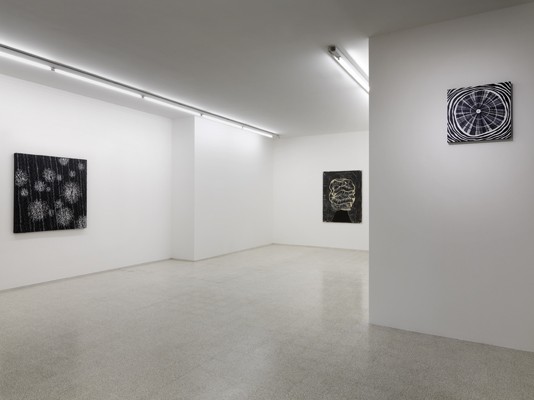 The exhibition Figurative Geometry brings together works by nine artists who can be thought to represent abstraction or, equally, to abstract representation.

To these ends, geometry and figuration are intermingled; shapes are shifted, geometry bends around itself, patterns emerge, while figuration refers to bodies in space—bodies which come forward and recede—as well as to numbers and their temporal register, to the number, for example, of seconds in a day.

Time is also one of the subjects at hand. All of these works have been hand-painted, in some cases wet-into-wet, having to be completed in a single session. The brushstroke itself, amplified and performing to the scale and volume of the picture plane, has duration. Though seemingly in two dimensions, some of these works play with depth of field in terms of material, layering and transparency, spatial dislocations that involve the rooms in which they are shown. Here they may also be considered as time-based, operating visually at different speeds. Whether revealing their contents gradually or seemingly in an instant, an element of time exists between the image and its reception, between the viewer and the work. In this we are reminded that the human exploration of space begins first with vision, since we "move" through the world with sight before negotiating it with our bodies. There is a danger of losing certain early powers of observation as we become increasingly mobile and distracted, mobility increasing and decreasing over the arc of our lives. Painted pictures, whatever the speed at which we receive them, mean to slow us down, to draw us towards them. The works in this exhibition, even the most abstract in appearance, perhaps these most of all, can be seen to represent the act of looking, on the parts of both the artist and the viewer.

For some of these artists, their primary means is painting. For others, this is an aspect of an expanded practice, paint being but one material while its application, in the usual sense, is one process among others. There are paintings in this exhibition which have been pieced together, as if forms were composed to create a picture-puzzle. Some of the paintings are sculptural, engaging with architecture and the support as a surface to be folded, like a screen, or with plaster revealing its faults—and thus a passage of time—a wall upon a wall. Similarly object-like are intimate "tiles" of baked enamel, light and chromatics playing off the polished shine of their surface. Arranged in sequence, these works installed as a single line, can also seem to perform, finding their rhythm internally from one to the next, syncopated as much by the spaces in between. Staged in this way, the proscenium wall becomes part of the picture plane. As in the theater, there is also a suspension of disbelief. Though entirely composed with paint and brush, some of the paintings on view appear to have been woven, thin lines threading though fabric, canvas seeming closer to linen or gingham, with its stripes, checks and plaids—basics, in fact, of geometric abstraction, and related to clothing and the body, to figuration—patterned, dyed, stitched and hand-sewn.

Even though most of the works on view have been painted, this is not a show of paintings but of painters, an important distinction to be made. For these artists, the act of painting is clearly represented in their work, and it can be seen as a statement. In a period when anything hung on a wall must be instantly afforded the status of painting, when we are confronted by "paintings" that have been made without any recourse to paint whatsoever, created with printers and scanners, or with the assistance of nature, bleached by the sun, stained by the rain—a pretense of process art to painting en plein air, and very late in the day—an engaged practice of painting, rather than dismissed as a thing of the past, is ever more present. In terms of visual art, painting is considered to be the least expedient conveyance of information today, yet why is this undesirable? Painting, with some frequency dismissed as obsolete, persists and counters: replaced by what, exactly? As a purely invented world it need not reflect the visible. It makes visible what wasn't there before, what lies beyond, or has disappeared altogether. All art is evidence of life on earth, and of passage, though not all art will embody this passing. A number of darker works in this show, nocturnes of a sort, attempt to visualize deep, cosmic space, have been referred to as "Landscapes" and qualified as "Before Dying." As a particularly resonant example of figurative geometry, they embody time in terms of mortality, of human trajectory and its traces, serving to remind us that the painted portrait, even cracked and tattered, always outlasts its subject.

The artists in the show include: