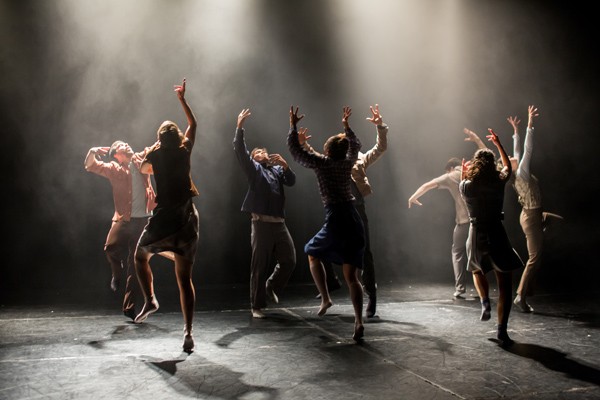 The Hofesh Shechter project, in the calendar of events of the Aperto Festival 2015, comes from a collaboration between Collezione Maramotti, Max Mara, and Fondazione I Teatri for an exclusive experience of a site specific performance in the Collezione’s spaces (from 3 to 5 November – four performances) and the Italian première of deGeneration at the Teatro Cavallerizza (7-8 November). The synergy between these three organisations began in 2009 with the involvement of the Trisha Brown Dance Company, and has consolidated over the years with biannual events, featuring Shen Wei Dance Arts in 2011 and Wayne McGregor | Random Dance in 2013, with the aim to create a dialogue between the world of dance and the visual arts.

The spaces of Collezione Maramotti will host an original site specific performance created by Shechter, in dialogue with the works of art and the architecture that houses them. It is a unique experience for Collezione Maramotti – the last time the company worked in this way was during a presentation of extracts of Political Mother adapted for the spaces of the Saatchi Gallery in London. The four performances at the Collezione premises will be a fantastic opportunity to view performances in an intimate setting, using the space to inspire the work. Performing alongside Shechter Junior dancers, at the special request of Hofesh will be Sita Ostheimer, former company dancer and Shechter Junior Rehearsal Director.

deGeneration will be presented at the Teatro Cavallerizza in an exclusive Italian première. It is composed of three parts: two of Shechetr’s rarely seen first works, Cult (2004) and Fragments (2003), alongside the award-winning Disappearing Act (2015).

The main themes of Cult (2004) are the games of power in society and the struggles they produce, bringing in a recurring dynamic in the choreographer’s work: the individual with or against the group, the attempt to join together to give meaning to life and achieve personal and social harmony. Fragments (2003) is a duet exploring the intimate relationship between a man and a woman, alternating seriousness and humor, games of power and seduction, pragmatism and sensuality. Disappearing Act (2015) picks up the motifs of the two previous pieces in a more choral or ensemble format, based on a 2012 creation and especially adapted for and inspired by the young performers of the new Shechter Junior line-up.

Hofesh Shechter is often defined as an “Israeli choreographer” even though he has lived in London for more than fifteen years. The style that made his name draws inpiration from Middle Eastern and Northern European folk dance, recast in a contemporary key by way of vigorous group choreographies and solo counterpoints permeated by an intense and driving rhythm. The spectacular choreographies that he brings to the stage are performed by dancers “inhabited” by an electric energy, an almost untamed physicality, and are accompanied by powerful music, often composed by Shechter himself. “Music for me is sort of emotional fuel. It acts as structure and provides atmosphere, rules, and thoughts. It is as important as the dance and is the big connecting thing. Being able to look at the piece as a whole – visual and sound, means the work is more total in its fulfilment of the energy it brings. Music is the reason I do dance.” (H. Shechter) Shechter’s intense work, traversed by the tensions and anxieties that pervade the contemporary world, investigates the obscure aspects of human action on the psychological, social, and anthropological planes. His compositions often evoke a need for protection and shelter of the individual who, in the face of the hostility of the world and of his own emotional insecurity, tends to retreat into himself. As a strong response to the limited opportunities offered to young people in the world of dance, in 2015 Hofesh Shechter created Shechter Junior, a company of international dancers between the ages of 18 and 25, selected from more than a thousand, for which he is the guide. Established to provide professional training to the most talented young dancers, the project represents for Shechter a formidable instrument for channelling the youthful vitality of the dancers and the mutual exchange of energy between the two companies, the Hofesh Shechter Company and Shechter Junior. The latter will be the protagonist of both events on the calendar in Reggio Emilia, by the precise choice of the choreographer.
www.collezionemaramotti.org