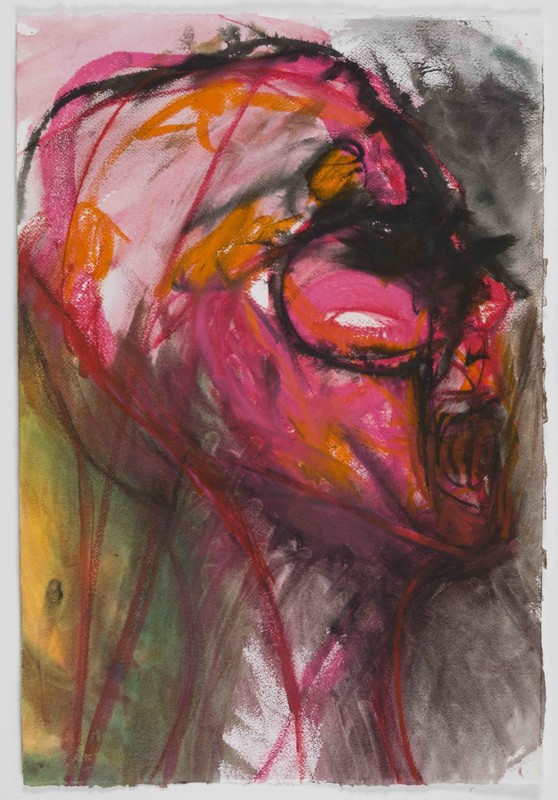 In both the six sculptures from the mid-1990s, and the six new drawings created for the exhibition Players, Huma Bhabha reinvents the human head, deconstructing and reconstructing an archetype in which she gathers and transforms various art-historical typologies: from the African, Oceanic and carnival masks to those worn by the actors/dancers in the Indian theatre, from the grotesque faces of Expressionist painting to the demonic, hybrid features we may find in the characters of science-fiction movies or the Marvel comic books.

The practice of inscribing a face with multiple meanings is also evident in Huma Bhabha’s recent pastels of imaginary portraits which in their iconography hark back to and build on precisely her masks of the 1990s. These masks were technological portraits of archaic beings, constructed using papier mâché and found materials, including plastic cables and vacuum cleaners hoses, almost as remnants of special effects from science-fiction and horror films.
These sculptures did indeed constitute the first significant emergence of Bhabha’s artistic personality, from which she slowly progressed to the architectural heads and figures that have characterized her more recent work, these too fashioned from found materials but with surfaces in painted clay, and in various states of deformation and fragmentation.

The drawings mark a return to an expressionistic mode of depiction of fantasmal faces; for them Huma Bhabha is again seeking inspiration from two very different sources, tribal art and science-fiction, combining them to arrive at a new kind of figuration. The artist constructs the human face as a site in which all the possibilities of the expressive can be played out: it’s a story that started with German Expressionism, even earlier with Munch and Ensor, and to which Picasso and Bacon later contributed further iconic complexity. Bhabha has created, in her own words, a gallery of “Players ... masks for what kind of ritual? gathering? or tournament? Lions, warriors, clowns, monsters ... all mashed up into some kind of twenty-first-century synthetic plaster, mutated and reinvented as a new/old race.”

Accompanying the exhibition is a catalogue published by Silvana Editoriale, with an essay by Mario Diacono. The volume also includes a text by the anthropologist Giancarlo Scoditti who explores the notion of the mask as an expressive form which in many tribal cultures can be related to a mental image that reveals itself in a ritual context: a subtle game of cross-references to something other than what is visible.
www.collezionemaramotti.org