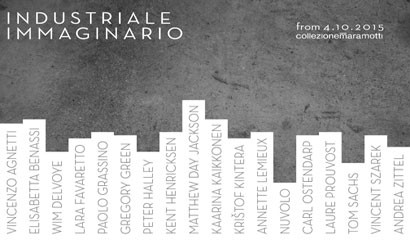 The exhibition presents works from Collezione Maramotti which have never been shown before, some belonging to the Collection's first historical group of acquisitions, while others have been recently bought or are commissioned works: the time span is quite large, from the work by Nuvolo from 1958 to more recent ones by Laure Prouvost and Elisabetta Benassi from 2013.

The works have been chosen in order to probe and illustrate some of the research in contemporary art that is explored through the use of typical industrial materials, the re-use of objects of industrial origin de-contextualized from their primary function, at the boundary between artisanal handiwork and industrial product in the creating process.

The formal outcome, the language codes and the artists' statements are very articulated: from research intimately linked to the definition of individual and collective memory, to political and social thinking on the processing and use of information, from life cycle of objects and perishability, to the search for the representation of reality and its perception between natural and artificial, to achieve together the polysemy of the work.