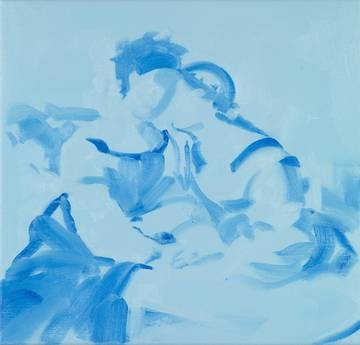 Already with the exhibition's title, Germania und Italia – that mimics the famous Italia und Germania, from 1828, by Friedrich Overbeck – the German artist Michael van Ofen announces that his artistic journey in Italy has focused on a formal investigation of picture-making that moves from the relationship that his work has constantly had with history painting. The history – and the paintings – evoked by van Ofen in these new canvases relates to the analogies that have linked Germany and Italy during the second half
of the 19th century, namely to the parallelism between the two countries in their process of nation building. The artist doesn't forget that this historical-cultural link had started long ago, with Tacitus' De origine Germanorum, had continued with the Nazarenes finding inspiration in Raphael, had become conspicuous with the proximity of creation of a unified state in both Italy and Germany in the decade 1861-1871, reaching a political intensity with their tragic alliance in World War II.

In the works of Germania und Italia, the artist draws on both German and Italian 19th century pictures or their contemporary reproductions, in order to conceptually establish his iconography by referencing images that can be turned into ruins: the painted memory of the events which had marked the destiny of the two nations is both evoked and revoked, recreated and disintegrated on the canvas.
The historical images evolve into ghostly structures where characters and objects are transcribed as shapes and colours, as geometry and gesture, as space and imagination. Van Ofen's painting has gradually moved, since the 1980s, from recognizable images of landscapes and architectures – created through a dense construction of solid, omogenuous brushstrokes laid on the canvas as to inscribe a dialectics of representation and abstraction – to the presentation of human figures that appear like short-circuits of the vision: essential forms legible as a visual stenography, painted with light-speed action, that push the representation to the limit of its possibilities and readability.

The 19th century was a time in which three important factors had an enormous impact, together influencing the practice of painting: the ‘invention’ of history, the virulence of nationalisms, the striving for a maximum of verisimilitude in representation under the pressure of photography. This seems to be a central reason why van Ofen has taken up pictures representative of that phase of painting as historical icons to be analysed, disintegrated, morphed into his own artistic project. In his German-und-Italian works, the narrative/epochal verisimilitude has been abolished, replaced by a non-perspective space with a uniformly, intensely black background, inside which the relics of representation and history play their last figural card.
www.collezionemaramotti.org