The Guardian Animals + other invisible beings 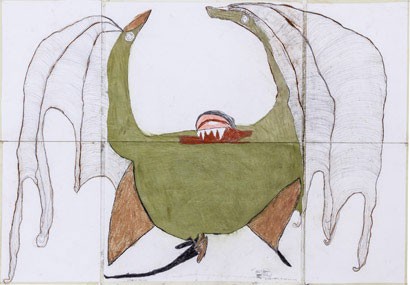 There isn't any single reality, nor a unique way of looking at things. Seeing things from different angles is a very fruitful way to come to terms with the world, with our living in this world. The youngsters from Atelier dell’Errore, a laboratory of visual arts created 14 years ago as a complementary service to the Child Neuropsychiatric clinics of Reggio Emilia and Bergamo, know this very well. Their creative imagination is focused on the representation of animals depicted as ancestral figures, living organisms foreign to any traditional order of scientific classification. The Atelier animals certainly embody the fears and defeats of those drawing them, but more so their need for protection and their powerful drive towards self-assertion. Alive with a visionary energy, the Atelier works spring out of the youngsters' need for assurance and support toward their achieving self-esteem and self-confidence and the development of a fruitful relational system with other people.

For the exhibition The Guardian Animals + other invisible beings, made in cooperation with Collezione Maramotti and Max Mara, Atelier dell’Errore has found a suitable interlocutor in Moretti Fine Art, the gallery specialised in important Italian masters, which thanks to its constant research, is an important point of reference for collectors of ancient art. In this new project the Atelier drawings were able to strike a peculiar dialogue with classical works, showing that some themes and archetypes move across art history without any time-based and geographical constraints.

The Fairy Queen, the video installation displayed in the window, beckons visitors to start an emotional and imaginific journey.
The exhibition follows two different and complementary strands of work in the gallery.
In the first one, striking a dialogue with the 14th-century painting on gold ground L’Arcangelo Michele by Andrea de Bartoli, for the first time the Atelier experimented with drawing on a “black ground” in which the works present an entomological interpretation of the classic iconographic tradition around the seven capital sins.

The dualism, not only formal, between the gold ground in Andrea de Bartoli's painting –hinting at an absolute light – and the black of the Atelier drawings – meant as the absence of light and absolute depth – is the leitmotif of the works.
The second group of works comprise ten large drawings on a white background, mostly with irregular shapes, housed in wood cases, which share the first room with the 17th-century tondo L’Angelo Custode by Carlo Dolci; and the second room with a small wood painting by Luca Signorelli portraying Saint Anthony Abbot. Inspiration, direction and care emerge from the depiction of figures. In the former painting, becoming the paradigm of the Atelier's social and expressive approach meant as “relational art work”: the youngsters' ability to trust, and taking care of others, by presenting themselves as guides and points of reference for the frailest among them. The latter painting where the Saint, the protector of animals in the popular tradition, embodies the search for cleansing and liberation through simple life and constructive work.

The exhibition also includes the book Atlante di zoologia profetica / Prophetic zoological Atlas (edited by Marco Belpoliti, Corraini Edizioni publisher). The book, conceived after the exhibition Uomini come cibo (Milan, June – September 2015), is a sort of atlas with many plates of the Atelier works and a series of multidisciplinary contributions on art and the specificity and exceptionality of the works made by the Atelier youngsters.

On 6 October 2016, at 7.00 pm, the Italian Cultural Institute of London will host Notice to Voyagers / The Guardian Animals, a meeting in which Arturo Galansino (General Director of Palazzo Strozzi, Florence) and Massimiliano Gioni (Associate Director and Exhibitions Director of New Museum, New York), with Marco Belpoliti (writer and literary critic) as a moderator, will dialogue about the vision and the experience of the Atelier, starting from the book and the exhibition on show in London.
www.collezionemaramotti.org