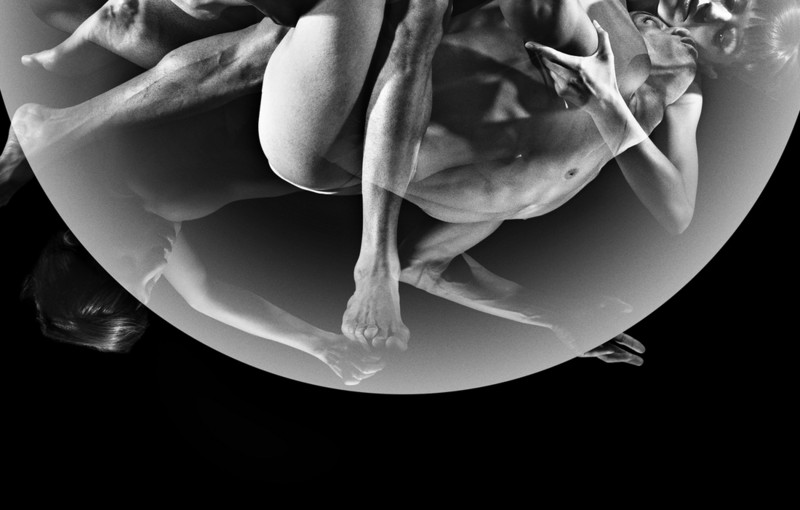 McGregor: The grammar of the body, a fertile encounter between dance, technology, and architecture.
A project for Collezione Maramotti and Fondazione I Teatri of Reggio Emilia.
WAYNE MCGREGOR
Random Dance Project
15 - 17 November 2013

The Wayne McGregor | Random Dance project, part of the 2013 calendar of the Aperto 2013 festival, sees Fondazione I Teatri alongside Collezione Maramotti and Max Mara for the world première of the site-specific performance Scavenger in the Collezione's spaces (16 and 17 November – four performances), together with the Italian première of Atomos at Teatro Valli (15 November).
The collaboration between I Teatri, Collezione Maramotti and Max Mara, aiming to create fruitful dialogue between the world of dance and the visual arts, comes together in a journey begun back in 2009 with the involvement of the Trisha Brown Dance Company, and later Shen Wei Dance Arts in 2011.

So lean – and he seems even more so in the natural light that pervades the essential architecture of the Collezione Maramotti –, Wayne McGregor studies the works of art on display with the attention of an entomologist and the enthusiasm of one who discovers a place akin to his own sensibility. The dancers of his Random Dance, the resident company at Sadler’s Wells in London, do the same, noting their impressions and thoughts in small notebooks, each one choosing a work from the collection to make his or her own, to be investigated, metabolised, and then returned to the audience and the other dancers, brought back into the world through the dancer’s own body, in an exchange of energy flows.
On the other hand, is this not what makes a “Scavenger”, which regenerates and brings back to life that which “is no more”? And is this not the fine vital link that joins the artwork to the viewer?
In connection with the Italian première of Atomos, the world première of Scavenger, a site-specific performance conceived, directed, and choreographed by McGregor, is presented by the man himself as “a new challenge”.
Fascinated by the brutalist and organicist architecture of the building that houses the Collezione Maramotti, Wayne McGregor defines it as a primary resource for the creation of a grammar around the body, whose punctuation is made up of proximity and perspective distance between performer and space, and in which the dialogue between the parts becomes really organic.
The end result of Scavenger will therefore derive from the combination of the dancers’ creativity, the choral vision of Wayne McGregor, and a third, innovative element: “becoming”, an “eleventh virtual performer”, a “digital” sculpture inserted between the material sculptures based on software capable of transforming the stimuli from the dancers’ movements into an autonomous creation, visible on a screen and for the first time presented live as an integral part of McGregor’s performance.
The choreographer has made a name for himself internationally also thanks to his study of the relationship between dance and technology, collaborating not only with multidisciplinary artists but also with neuroscientists and mathematicians.
Atomos (from the Greek for indivisible), in its Italian première at the Teatro Valli in Reggio Emilia, is the newest work by cutting-edge contemporary choreographer Wayne McGregor. Known for his unique, tenacious questioning across the interface of art and science and through the body and mind, McGregor has remained at the forefront of contemporary arts for the past 20 years.
The idea is to start from the indivisible unit of a choreography, which then grows in the same way a living structure, such as a building, grows. The end result can only be a conjecture, because with McGregor everything is always in flux.
www.collezionemaramotti.org