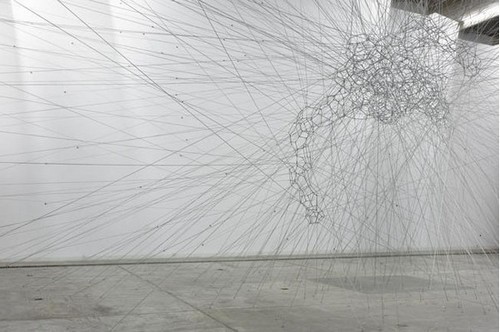 Galleria Continua is pleased to present Another Singularity, a solo show by Antony Gormley, in its Beijing gallery space.

Winner of the prestigious Turner Prize in 1994, the artist is showing a series of new works, including a large installation, Another Singularity, sited in the central area of the gallery.
The work consists of a complex web of silk-covered bungee cords, the centre of which delineates a body-zone constructed from packing polyhedra that conform to the geometry of the bubble matrix.
The skin of this zone is connected to the inner skin of the building by 682 radiating trajectories that complete the tetrahedral node pattern of the matrix.
The idea, explains Gormley, is to treat the body as an adimensional space, rather than as an object, and to connect it to architecture and internalise the foundational conditions of space/time 13.7 billion years ago (the Big Bang).
The orthogonality of the architecture is called into question and the work modifies our perception of space and movement Art becomes a tool for proposing and testing a new time/space model.

The exhibition contains 5 other sculptures that are dematerialisations of the artist’s body. As viewers move upwards from one floor to the next, the sculptures become perceptibly lighter.
In his engagement with the body ‘as place,’ Gormley constantly experiments with new formulas, breaking the body down into pixels or seeking to overcome the barrier of the skin itself. This has resulted in works like Feeling Material XXXIX, where steel spirals whirl out from a void, body-shaped nucleus, producing an energy field where the unbroken line creates a dance between the inner and outer space

Over the last 25 years Antony Gormley has revitalised the human image in sculpture through a radical investigation of the body as a place of memory and transformation, using his own body as subject, tool and material. Since 1990 Gormley has expanded his concern with the human condition to explore the collective body and the relationship between self and other in large-scale installations. He has created some of the most ambitious and iconic works of contemporary British sculpture, including Field, Angel of the North at Gateshead, Quantum Cloud on the Thames in London, and Another Place, now permanently sited on Crosby Beach near Liverpool. His work has been exhibited extensively at major international galleries and museums including the Tate, Hayward, Whitechapel and Serpentine galleries in the UK; the Museum of Modern Art in New York; the Los Angeles County Museum of Art; the Louisiana Museum in Humlebaek and the Irish Museum of Modern Art in Dublin.

Antony Gormley was born in London in 1950.
www.galleriacontinua.com