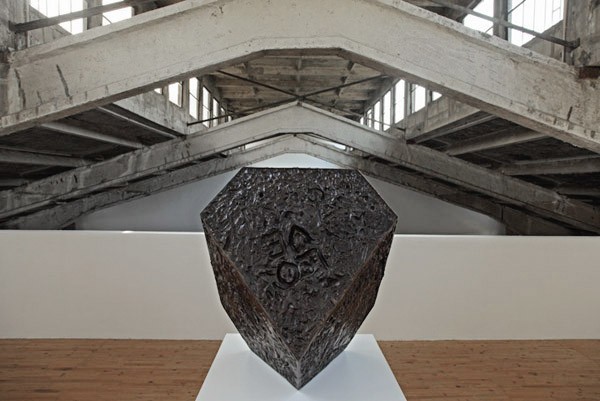 Nothing can be repeated, nothing can be lived twice in a lifetime.
Sometimes we find ourselves experiencing extremely meaningful moments. These moments happen in a precise and specific time and place. Certain acts, performances, artworks and installations become part of our lives, enriching our feelings and way of thinking.
There are times when we would like to repeat these “special” experiences in order to absorb more from them; other times we would like to erase them from our memories because they are painful or too difficult to cope with.
In the art world there are special works like performances, installations and projects which have been “frozen” using different media like photography and video, so the history of art can keep a tangible trace of them, and so the public and future generations can continue to see and enjoy them.
The show at Galleria Continua/Beijing offers a great opportunity to see remarkable works by: Gu Dexin, Shilpa Gupta, Kendell Geers, Giovanni Ozzola, Michelangelo Pistoletto, Sun Yuan & Peng Yu.
The work by Gu Dexin, entitled 2006-09-02, represents traces of an amazing “live installation”. The artist composed the original work by arranging real fruit on the gallery floor, naming the piece after the date of the opening day, which is also the date on which the artist “finished his part of the work”, leaving the apples to continue the performance, and leaving the viewers as passive observers for the whole exhibition time. They were spectators of a fascinating process of decomposition that no-one had the power or the will to change or interrupt. In June 2009, the twentieth anniversary of the Tian’Anmen massacre, Gu Dexin abandoned the art scene for good.
Shilpa Gupta’s video work 100 hand-drawn maps of India is a fantastic representation of how, in the pure minds of children, reality can take on a totally subjective and abstract shape. The artist asked 100 kids to draw a map of India; the country kept changing contours, assuming unrecognizable, unrepeatable shapes. The result is a fantastic, spontaneous and always unique geography.
One of the most prominent and controversial artists of our time, Kendell Geers created for our last exhibition a work entitled The lugubrious game (fingered). The project consisted of a table, the shape of which was supposed to recreate Dürer's solid, with its whole surface opened horizontally, covered by clay deliberately left “virgin” in order for people to interact freely with it, and to liberally express their ideas by handling and writing on it. Cast in bronze and mounted as a solid after the exhibition ended, it is the result of when, in a specific time and place, the public was invited to become part of the artist’s world and to take free action in the show. The video work Act 4 Scene 7, a collaboration between Kendell Geers and Ilse Ghekiere, is a reference to Queen Gertrude’s announcement of Ophelia’s drowning in Hamlet. The performance was filmed in complete darkness, stimulating discourses about gender-structured madness. Ophelia has often been the subject of discussion about the representation of female madness. Of great importance is the powerful sense of overlap between the performer’s identity and the role she plays.
In the meditative work of Giovanni Ozzola, Garage - sometimes you can see much more, viewers experience a time and space that are like indefinite territories, as the sea and time can be. In a tribute to Edward Hopper’s Room by the sea, a shutter rolls up and down onto the sea; the viewer is a castaway, involuntary experiencing a trip towards a predetermined place, in a genuine rebirth experience.
The work of Michelangelo Pistoletto on show at Galleria Continua/Beijing, Suspended perimeter-Love difference, is the creation of an endless and infinite concept of “time”. By multiplying mirrors, Michelangelo Pistoletto sets out to procreate something like a new family, which is one of society’s principal structures. Individuals originate from a division of the unitary entity that started the multiplication of its descendants. The mirror splitting is intended to demonstrate that the same principle and process are valid for art too. Life, just like light, needs a body, i.e. art, on which it can alight. Art, as a reflection of life, gives back to energy its power of self-identification. Uniformity and difference are the two opposing terms that represent the greatest conflictual tension in the reality of the planet today. A policy that leads people to “love difference” is vital for the development of new perspectives in the whole social sphere. Differences between individuals and social groups are the first thing that needs to be accepted and welcomed openly, sensitively and warmly, so as to finally give meaning to the word “humanity” in what is an ever-more globalized world.
Sun Yuan & Peng Yu’s photographic work The world is a fine place for you to fight for, named after their solo live show, is the outcome of an extremely well-prepared Machiavellian plan. The two artists were able to trick the Chinese and Italian
customs, and to confound the expectations of the general public, by creating a highly meaningful performance work that was apparently easy, like a magician’s trick, but in fact very complex and critical in its content. The photos show details of two scenes; one features metal kitchen equipment, the other shows an allegory: an uninterested businessman surrounded by stuffed, fierce-looking wild animals. Around each scene a group of guards keep changing places, switching from one “reality” to another. According to the artists, art is mere illusion too. Whether it has its own ethereal independence or has socio-political connotations, it is always forced. Nothing is real in this life, everything is theatre.
www.galleriacontinua.com