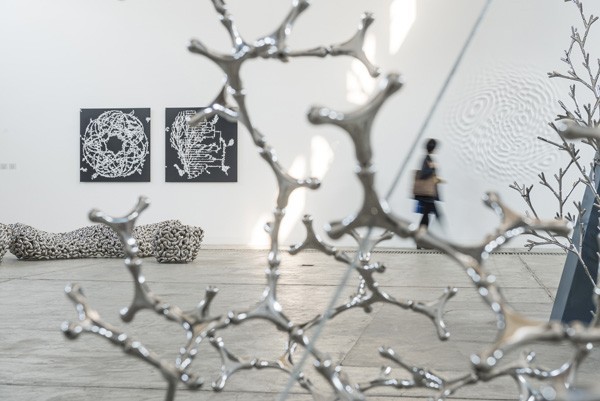 With this solo exhibition by Loris Cecchini, Galleria Continua is proud to present in its Beijing gallery a new show designed especially for the space, together with a special project by Loris Cecchini and Francesco Simeti, in conjunction with Miroglio Textile.

Cecchini’s works explore open structures based on generative modules designed by the artist and industrially produced in steel: every single element contributes to the creation of an “organism”, generating a context lying between a microcosm and a macrocosm that brings together and establishes a close relationship between different aesthetic categories and the scientific sphere. The artist’s inclination is to poetically elaborate space through the deconstruction of reality at different levels; in fact, through the forms and the cold, sophisticated materials selected by the artist, it acquires composite, creative and revelatory aspects.
Cecchini’s latest work focuses principally on diagrammatic models, searching in the alterity of artifice a key of ambivalence of Western systems of representation. Physical phenomena become an optical and emotive inventory of the environment, natural systems turn into algorithms of a non-homogeneous system, both complex and individual, in order to reveal the invisible processes of our present. Searching for an analogy between grammar and anatomy, in their language the works recall formulas capable of generating auto-poietic systems in which the bursting out of the structures regenerates itself, contaminates and transforms itself, just as happens in an organism.
The sculptural installations, made up of hundreds of elements, seem to be a biological metaphor – cells that open and flower, releasing molecular components that engage with the gallery space.
The tall lamp post installed in the space – abandoned and at an angle – is an urban landscape element on which a new possibility of life and of a project is grafted. Like climbing plants, the sculptures propagate on it and in the space in a kind of writing that is at once emotive and organic: the resulting drawings bring out different narratives and ideas, outlining the speculative potential of sculpture as diagram, where the “model of reference” moves from scientific representation through artistic interpretation, and vice versa.
In the “Wallwave Vibrations” series, the alteration is introduced as the physical manifestation of vibrations expressed; the visual mesh is transformed into the echo of a purely physical phenomenon, like the succession of waves on a flat liquid or the effect of the movement of sound on a surface. It is as if the whole architecture, or a part of it, were suffering the consequences of a phenomenon that influences, modifies and leads it towards an organic symbiosis between sculpture and wall.
The number of surreal elements, and their formal complexity, take the works into a dual terrain between abstraction and the sublime, where the point of departure is a kind of equation for measuring the physical reactions of a wave in space.
The constant dialectic between nature and artifice – what is distinguishable from nature in that it is produced by humans – is never the exclusive end of Cecchini’s work, but should be considered as a means for discovering a technology that inevitably engages with the compendium of the natural and with a cultural artifice based upon it.
The special project involving Loris Cecchini, Francesco Simeti and the Miroglio Textile consists of two actions. The first is with Metri d’Arte on the second floor of the gallery; after doing a workshop in Alba with skilled workers from the Miroglio company, the two artists produced some works arising from the experience, on display in the gallery in Beijing.
Arising from the contact with the Miroglio Group, and pursuing one of our lines of action, we decided to ask Loris Cecchini and Francesco Simeti to donate the works for a charity evening to be held on 28 March at the Galleria Continua in Beijing. Organized in conjunction with Miroglio Textile and the Italian Institute of Culture in Beijing, the event will be attended by the Chinese artists Liu Ye, Zeng Hao, Ji Dachun, Zhan Wang, Chen Wen BoɼHai Bo and Tan Ping. All the funds raised during the evening will be destinated to the humanitarian project “Children’s Hospital of Qingdao”, where the association “Solidarietà Italiana

Qingdao”, already active from several years in this area, will help us follow directly the project and documenting it in total and absolute transparency.

Born in Milan in 1969, Loris Cecchini lives and works in Berlin. One of the most prominent Italian artists on the international scene in the last decade, he has shown his work around the world, with solo shows at prestigious museums and galleries like the Palais de Tokyo in Paris, the Musée d’Art Moderne de Saint-Etienne Métropole, the PS1 in New York, the Shanghai Duolun MoMA, the Museo Casal Solleric in Palma di Maiorca, the Centro Gallego de Arte Contemporaneo in Santiago de Compostela, the Kunstverein in Heidelberg, the Fondazione Teseco in Pisa, Quarter in Florence, the Centro per l’arte contemporanea Luigi Pecci in Prato, and others. Cecchini has also participated in various international art events, including the 49th Venice Biennale, the 6th and 9th Shanghai Biennale, the 13th and the 15th Rome Quadriennale, the Taipei Biennial (Taiwan), the Valencia Biennial and the 12th International Sculpture Biennale of Carrara. He has contributed to many group shows, for instance at the Ludwig Museum of Cologne, Palazzo Fortuny in Venice and Macro Future in Rome, and has produced a number of permanent site-specific installations, in particular in Italy, at Villa Celle (Pistoia) and in the courtyard of Palazzo Strozzi in Florence, in 2012.
www.galleriacontinua.com