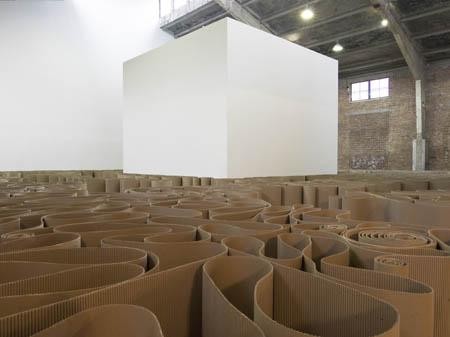 Galleria Continua Beijing is proud to present the first solo exhibition in China by Michelangelo Pistoletto, one of the most eminent Italian contemporary artists.

Following the artist’s participation in the group shows Manmano in 2005 and One Colour in 2007, the gallery is now exhibiting a new body of works, which can be seen as the fullest evolution and realization of the essential concepts underlying Pistoletto’s work since his debut as an artist in the 60’s. So while the solo show is powerfully imbued with important new elements, it also offers a broad-ranging, retrospective view of Pistoletto’s artistic career, introducing viewers to the artist’s aesthetic and conceptual world.

Pistoletto’s expressive coherence is clearly visible in the work that opens the show: the mirror element, which continues to be a distinguishing feature of his art, is combined with an apple, the motif of Pistoletto’s most recent output. Introduced in 2007 in the form of a “reintegrated apple”(Woollen - the Reinstated Apple, 2007), the primordial fruit is an emblem of the Third Paradise, that is “the fertile coupling of the first and second paradise. The first is the Terrestrial Paradise preceding the biting of the apple. It is the natural paradise where everything is regulated by the intelligence of nature. The second is the Artificial Paradise, which has been developed by human intelligence through a very slow process and which in the last two centuries has assumed an ever wider and more exclusive dimension. [...] There are indicators everywhere of the danger of an increasingly likely and tragic collision between these two spheres. To avoid moving closer to this catastrophic event it is necessary to conceive the global project that I call the Third Paradise. [...] The biblical references are not intended in a religious sense but are used as a message to give meaning and strength to the concept of responsible social transformation and to motivate a great ideal that brings together art, science, economy, spirituality and politics in a single all-embracing commitment” (Michelangelo Pistoletto). The notion of the “fractal” is once again of great importance for Pistoletto. The individual elements making up the figure of the apple are a reminder that every single mirroring element already contains the infinity of the real world that is reflected in it.

The centrifugal-centripetal image of the reflecting apple in the entrance acts as an incipit to the large installation that completely occupies the main exhibition space. Here, in the centre of a labyrinth of corrugated cardboard (a “poor” material that recalls the art movement defined by Germano Celant in the 60s as Arte Povera, of which Pistoletto was one of the chief exponents) stands an enormous, monolithic 5 m white cube. The only way of getting to the cube is by going through the maze, a figure from classical mythology that also features in Pistoletto’s Labyrinth, 1969–2001.

Inside the cube, which is entirely covered with mirrors, is A Cubic Meter of Infinity, a work belonging to the Minus Objects series of 1965-1966; this is a simple cube consisting of 6 sheets of mirror facing inwards. The accessible mirroring environment becomes the space in which viewers are invited for the first time to experience what had previously been absolutely excluded from, namely the space of A Cubic Meter of Infinity, which thus preserves its status as a space of pure imagination.

The other works in the show constantly reference the artist’s ‘historic’ works. Sometimes the allusion is evident, as in the well of cardboard with a mirror at the bottom, which refers to The Wells, 1965-1966, or in the five mirror-cages, which recall the Mirror Cage, 1973-1992. Other times, the allusion is only hinted at, as in the two specular series of “perspective of black in white” and its inverse, or in the work in which a large sheet of mirror loses a small fragment (as in Broken Mirror, 1976), to which the artist has added, with an ironic, jokey gesture, his signature.

Exactly as on the threshold of a mirror painting, this succession of works, that continuously recalls each to the other, places Michelangelo Pistoletto’s artistic research in a temporal dimension which includes the past, the present and the future.


Michelangelo Pistoletto was born in Biella in 1933.
When he was 14 years old he began an apprenticeship in the studio of his father, a painter and restorer; subsequently he attended the advertising graphics school run by Armando Testa.
In 1960 he had his first solo exhibition in Turin. In 1961-62 he produced his first Mirror Paintings, which gave rise to a new “retrovisual” perspective that directly included the presence of viewers and introduced the active dimension of time into the picture. In 1963 he contributed to the Dessins Pop exhibition at the Sonnabend Gallery in Paris, and then went on to show in the most important international-level exhibitions devoted to Pop Art and Nouveau Realisme.
In 1964, with The Plexiglases, which showed at the Galleria Sperone in Turin, Pistoletto also defined the theoretical premises of Conceptual Art.
In 1965 and 1966 he produced a group of works entitled Minus Objects, based on the principle of difference. These gave rise to Arte Povera, the movement theorized by the critic Germano Celant and recognized internationally as one of the most important art trends of the 20th century.
In 1967 Pistoletto formed a group called Zoo, which combined visual art, theatre, music, dance and so on, and performed throughout Europe.
At the Venice Biennale in 1968, he presented the Manifesto of “Creative Collaboration”. In the same year he won an award at the Biennial of São Paulo.
In the 70s he continued to explore and develop the mirror theme in works and actions such as Division-Multiplication of the Mirror and Art Assumes Religion. Furthermore, between September 1975 and October 1976, he produced a temporally extended work entitled The Rooms, consisting of a one-year exhibition divided into twelve one-month expositions. This was the first of a series of shows contained within the time span of a year and collectively named as “Continents of Time”; these include White Year, January-December 1989 and Happy Tortoise, a year for Documenta at Kassel in 1992.
In 1994, at the Marstall Theatre in Munich and at the same time at Palazzo Comunale in Pistoia, Pistoletto made public his “Art Project” Manifesto, which, through an ethical and aesthetical commitment, places art at the centre of the search for “responsible social transformation”.
From 1991 to 2000, he taught at the Vienna Academy of Fine Arts. In the same period he set up Cittadellarte-Fondazione Pistoletto, a multicultural and multisectorial centre in Biella.
In 2002 he received a diploma for meritorious services in culture and the arts from the Presidency of the Republic.
In 2003 he was awarded the Golden Lion for Career Achievement at the 50th Venice Biennale.
In March 2004 he received an honorary degree in Political Science from the University of Turin.
In May 2007 he received the Wolf Prize for the Arts in Jerusalem.

There are works by the artist in the collections of some of the world’s major modern and contemporary art museums, including the MOMA in New York, the Beaubourg in Paris, the Galleria Nazionale d’Arte Moderna in Rome, the National Museum of Contemporary Art in Seul, the Municipal Museum of Art in Toyota, the Reina Sophia Museum in Madrid, the MACBA in Barcellona and the Smithsonian Institute Hirschorn Museum in Washington.