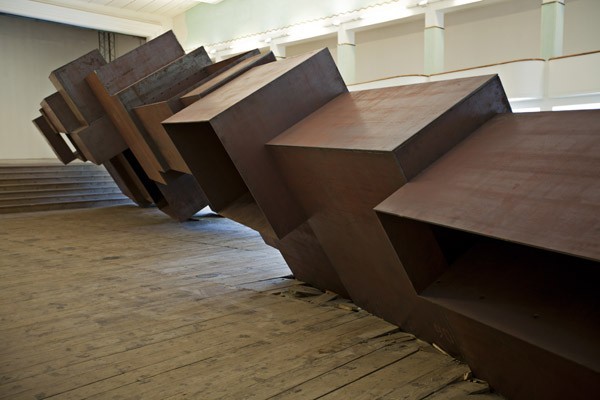 Galleria Continua is pleased to present, for the first time in its San Gimignano gallery, the work of Antony Gormley, one of the greatest contemporary English sculptors.

Following the exhibition at GALLERIA CONTINUA / Beijing in 2009 and the solo show currently on view at GALLERIA CONTINUA / Le Moulin, Gormley is presenting VESSEL, which includes a major new work specifically conceived for the former theatre-cinema of San Gimignano. With this exhibition the artist is adding to a rich programme of special events in Italy and around the world: between April 2012 and January 2013, Gormley’s work will be presented in a group show at the Galleria dell’Accademia in Florence, and in solo shows at the Deichtorhallen Hamburg GmbH in Germany and in Brazil at the Centro Cultural Banco do Brasil in São Paulo, Rio de Janeiro and in Brasília.

Gormley's explorations of body, space and time continue to test environment, form and feeling, often pitting one against the other. This exhibition interrogates the body through architecture, asserting it as both a model of spatial organisation and subject to gravitational force, articulating the tensions as well as convergences between the human animal and his or her habitat.

In a sequence of twelve new solid iron blockworks, Gormley puts the formal purity of Modernist abstraction to work to evoke and provoke inner states. These works use the language of stacking, propping and cantilevering, and mass, familiar from the work of Richard Serra to objectify the experience of embodiment; to produce a somatic sense of containment or conditioning that exists within urban man.

Blurring the distinctions between content and context, the twelve massive castings are contrasted with the space frames of a new BREATHING ROOM. Sited in the empty tower at the north of the Galleria Continua and constructed from seven interconnecting luminous frames all of an equal volume, the work encourages self-observation on the part of the viewer within a luminous matrix. The work is a concentration chamber for an abstract and temporal evocation of the second body: that of architecture.

The exhibition contains some foundational works. BASE is a two metre square solid concrete slab that encloses a void impression of an absent body, identifiable through the holes created by the soles of the feet, palms of the hand and the brain cavity. Also on view are two versions of EDGE, installed perpendicular to the wall, providing a haptic destabilisation of the architecture.

The fulcrum of the show is a large-scale work entitled VESSEL, which also acts as a trait de liaison between the exhibition project at San Gimignano and Gormley's project for Galleria Continua's French venue. At Le Moulin, his investigation of the different variables in the relationship between the human body and living space is articulated in SPACE STATION, a vast 23 tonne sculpture enterable by a small passage in the side of the work. VESSEL is made out of 39 interconnecting rectangular steel boxes that reverse the renaissance trope of the city in the form of a man by making a man in the form of a city. This recumbent anti-monument, perhaps seen at first as an off-kilter work

by Donald Judd, now provokes greater questions about the social and inspirational role of sculpture and its potential to provide direct bodily experience.

Four new works use the bubble-matrix principle to explore the way in which bubbles, the most fugitive of forms, coalesce to create cloud forms. Here is a language derived from the structure of matter and applied to the body to illuminate its temporal nature. They are complimented by SUM, made from an association of solid polyhedral forms expanded and arranged directly on the floor.

In the gallery’s garden Gormley will install a double sculptural work in marble. The work tests the evolution of art in the age of mechanical reproduction, transforming bone, skin and muscle into a finished work of crystalline geometric rigour not dissimilar to the structure of marble itself. As in 2 x
2, shown at the 2010 Carrara Biennale, Gormley creates the image of a body that is inspired by the great artistic tradition of the nude, but at the same time reflects our new knowledge about the sub- optical properties of matter.

Recalling past projects such as FAI SPAZIO, PRENDI POSTO (MAKING SPACE, TAKING PLACE) from 2004, the exhibition will continue outside the gallery and into the streets and cells of San Gimignano with an invasion of six identical body forms, including one placed on a tower close to the town’s main piazza. This installation, realized in collaboration and with the patronage of the Municipality of San Gimignano, considers how the social role of sculpture has shifted from that of memorial and heroism to that of a reflexive object which encourages the viewer to be aware of his or her own position in space and time.

This installation and exhibition see the artist trying to reconcile the subjective space of the individual with the idea of the expanding universe, questioning how the human project fits into the scheme of things.

On the occasion of this solo show, the symposium "Re-imagining the city", on the relationship between the city and human beings, will be held on 29 April at 10.30 am at the Teatro dei Leggieri in San Gimignano. Participants will include Antony Gormley, Germano Celant, Richard Sennett, a professor at New York University and at the London School of Economics, Anna Coliva, director of the Galleria Borghese in Rome and the critic and curator Mario Codognato.

After the show opens a catalogue will be published by Gli Ori.

Antony Gormley was born in London in 1950. In a career spanning nearly 40 years, Gormley has made sculpture that explores the relation of the human body to space at large, explicitly in large-scale installations like Another Place, Domain Field and Inside Australia, and implicitly in works such as Clearing, Breathing Room and Blind Light, where the work becomes a frame through which the viewer becomes the viewed. By using his own existence as a test ground, Gormley’s work transforms a site of subjective experience into one of collective projection. Increasingly, the artist has taken his practice beyond the gallery, engaging the public in active participation, as in Clay and the Collective Body (Helsinki) and the acclaimed One & Other commission in London’s Trafalgar Square.

Gormley was awarded the Turner Prize in 1994, the South Bank Prize for Visual Art in 1999 and the Bernhard Heiliger Award for Sculpture in 2007. In 1997 he was made an Officer of the British Empire (OBE). He is an Honorary Fellow of the Royal Institute of British Architects, an honorary doctor of the University of Cambridge and a fellow of Trinity and Jesus Colleges, Cambridge. Gormley has been a Royal Academician since 2003 and a British Museum Trustee since 2007. In April 2012 the artist was awarded the title of honorary citizen of Poggibonsi.
www.galleriacontinua.com