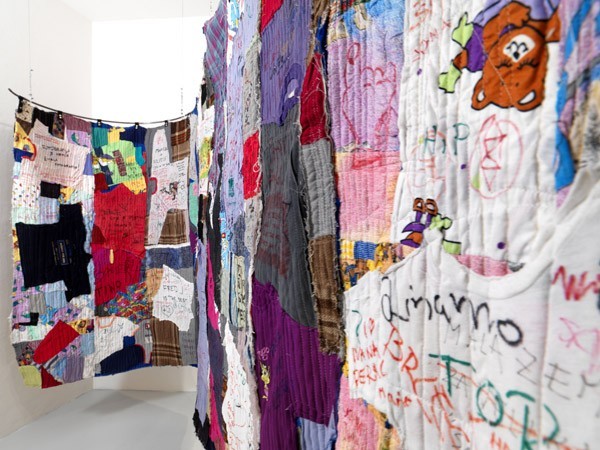 Chen Zhen, who was born in Shanghai in 1955 and died in Paris in 2000, is regarded as one of the leading exponents of the Chinese avant-garde and an emblematic figure in the field of international contemporary art. Ten years on from the celebrated personal show Field of Synergy, Galleria Continua is pleased to host once again the work of this fine artist in its San Gimignano gallery, in a major solo exhibition entitled Les pas silencieux.

Reappraising Chen Zhen’s work today opens up fresh perspectives and new lines of inquiry. With Les pas silencieux, Galleria Continua offers viewers the opportunity to really get to grips with Chen Zhen’s work, prompting reflection on the great relevance of his poetics in our age, concerned as it is with the enrichment of inner life, the quest for harmony between body and spirit, fraternity between different peoples and cultures, and the promotion of understanding, the resolution of conflicts, the preservation of identity and fruitful engagement between East and West.

The exhibition comprises a large number of works, produced between 1990 and 2000, set up in the exhibition rooms, the stalls area and stage of the former cinema-theatre, the garden and the gallery’s Arco dei Becci space.

Two of the works continue a prematurely interrupted dialogue: Le bureau de change – planned by Chen Zhen in 1996 and brought to fruition in 2004 for the Pancevo Biennale of Art in Serbia – and Back to Fullness, Face to Emptiness – conceived in 1997 and realized in 2009 for the 53rd Venice Biennale. The show is not organized either chronologically or thematically, but tries to reconstruct part of a journey that saw Chen Zhen exploring various cultural horizons: Chinese culture, the engagement with Western culture, and his adventurous experience of the world.

Chen Zhen studied and taught in post-Maoist China – an optimistic and ideological China. He experienced culture shock when he arrived in France in 1986, but continued to pursue his visionary research, rooted in a desire to participate actively in building a new world. Chen Zhen’s work is based on a model of transcultural thought, a concept he described as “transexperience”: a transcendent place in which the reciprocal friction between various experiences is manifested. It is a dynamic space, a field of energies where tensions and contradictions take shape, but also an area of contact between fluxes of energy. “Transexperience” is based on three fundamental ideas: “residence, resonance, resistance”. When travelling (whether for a day or a month makes no difference), venturing out of one’s native environment, what is important is to live mentally with the other, immersing oneself in the local context, trying to understand the culture of the new place: this is the ‘residence’. In so doing it is possible to enter into ‘resonance’, to tune into the culture being experienced. The consequence of these assimilative processes is ‘resistance’ to the influences of the new culture

Chen Zhen experienced these three processes first-hand when he moved to Europe, where he entered into resonance with Western art and culture, and then tried to resist it and to retain a strong sense of his culture of origin. Associated with the concept of residence and his propensity to undertake projects in atypical places and contexts are My Diary in Shaker Village (1996-1997), 27 portrait pictures arranged along a balcony, which recount the artist’s experience in the Shaker community Maine and the work Beyond the Vulnerability (1999), a full-blown imaginary landscape consisting of fragile micro-architectural forms made from candles. This work arose out of a one-month stay in Brazil together with children from the favelas of Salvador de Bahia. Through art, Chen Zhen helped the children to understand and think critically about the city by getting them to explore six different architectural styles, the fruit of six different social strata. In this way he stirred their curiosity in life, their understanding of society, and nurtured their dream of having a “home” of their own. By the end of the project all the children had made over thirty small houses from candles. Chen Zhen always had great faith in humanity and in the future generations. In Un Village sans frontières (2000), the artist used candles to construct a “universal village”, employing a symbolically significant number of children’s chairs – 99 – collected from around the world. “Using candles (in China the candle symbolizes the life of a man)”, he would later write, “has a particular meaning: to build a village without frontiers, which it is up to us to begin, but our hope is always directed towards the future generation.”

Chen Zhen’s art is not just inhabited by an iconography of the body – cocoons, organs, skin, medicine, clothes. It is based on living, shaped according to an organic principle – water, fire, earth, air, digestion, gestation, combustion, circulation – and marked by an inner breath. Water, earth, fire (ashes) are the natural elements with which the artist purifies and transforms objects, restoring them to the world and to eternity. “Ashes are at once the body of a disinfected memory and manure that fertilizes the earth,” Chen Zhen sustained. In his work mind and body are never separate; indeed, in relation to one of the works in the show, La Désinfection (1997), he said: “At first sight the work shows a steam cooking system, but instead of food there are books. This work shows us the extent to which man needs two different forms of nourishment for his existence: material and spiritual nourishment.”

The spirit that shapes the works of Chen Zhen is rooted both in the bipolar dialectic of yin and yang and in Buddhist spirituality. Six Roots (2000) is an allegory consisting of 7 installations in 6 parts; in the exhibition there is Six Roots Enfance / Childhood and Six Roots / Memory. The title alludes to a Buddhist expression that describes the six main senses of the body (sight, hearing, smell, taste, touch, consciousness). The artist drew on this Buddhist theme in order to explore the “six stages of life”: birth, childhood, conflict, suffering, recollection and death-rebirth.

When he was 25, Chen Zhen began to suffer from haemolytic anaemia, which is why, from a very early age, he was acutely aware of, and closely examined, the value of time and space. He
considered his illness to be an experience worthy of value, from which he could take inspiration. In 1999 his artistic creativity began to develop in a new direction, with A Life Project – Becoming a Doctor. The Field of Synergy exhibition in San Gimignano in 2000 was intended as a prelude to this project. “The word ‘synergy’ is a medical term. It describes the coordinated functions and synthetic capacities of the various organs of the human body or of different medicines. [...] In my view the word ‘synergy’ does not just denote a concrete ‘common capacity’ in the material sense, but also a way of thinking [...] In common language it means considering each thing in the context of its essential factors. It goes without saying that in my case, this word means above all else a ‘collection of energy.’

And it is this collection of energies that Chen Zhen has left us, so that we too can follow his ... silent steps.
www.galleriacontinua.com