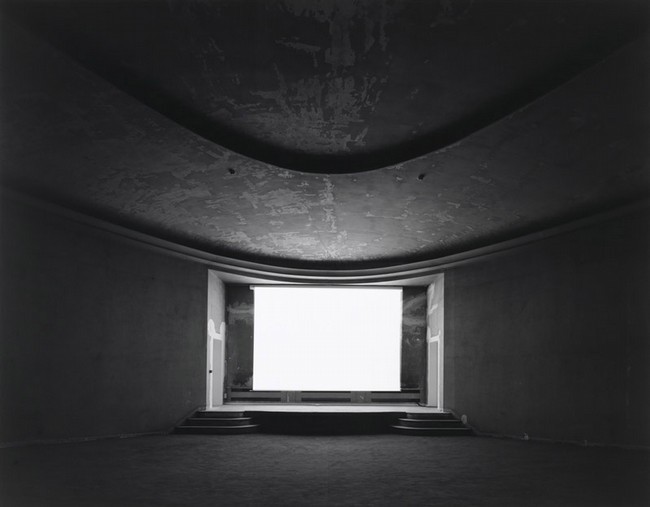 There is a double bill in Tuscany on Saturday 18 October: Castello di Ama per l’Arte contemporanea and Galleria Continua, San Gimignano / Beijing / Les Moulins are pleased to welcome one of the world’s most authoritative contemporary photographers, the Japanese artist Hiroshi Sugimoto.

The partnership between Marco Pallanti and Lorenza Sebasti – passionate art collectors and the owners of the Castello di Ama wine estate – and Galleria Continua, San Gimignano / Beijing / Les Moulins started back in 1999, giving rise to an artistic and cultural project which has seen artists of international fame producing permanent site-specific works for Ama, a small medieval jewel of a village nestling amidst the hills in the heart of the Chianti area.

Castello di Ama per l’Arte contemporanea is now being enriched by a further addition, entitled Confession of Zero, an installation conceived by Hiroshi Sugimoto especially for the collection. Situated inside the eighteenthcentury chapel of Villa Ricucci, and realized in conjunction with Galleria Continua, the work dwells on the concept of absence and the mystery of existence.

In the gallery spaces at Galleria Continua Sugimoto is presenting a number of previously unshown photos from the “Theaters” series, including Cinema Teatro Nuovo (2014), a shot of the former cinema-theatre in San Gimignano where the gallery is based. There is something almost surreal about the images, in which passing time, forced into a dimension that does not belong to it, is transmuted into light that digs into the darkness, delicately bringing to the surface the elements of the surrounding scene.

The first photos in this series date to 1978, when the artist started taking pictures of the interiors of 20s and 30s American theatres converted into cinemas, such as the Radio City Music Hall of New York. The idea was to condense the course of time and the perception of space into a single moment, making the exposure time and the duration of the film screening uniform. Sugimoto describes the illumination that led him to create this series like this: “One evening I had a near-hallucinatory vision. The question-and-answer session that led up to this vision went something like this: Suppose you shoot a whole movie in a single frame? And the answer: You get a shining screen. Immediately I sprang into action, experimenting toward realizing this vision. Dressed up as a tourist, I walked into a cheap cinema in the East Village with a largeformat camera. As soon as the movie started, I fixed the shutter at a wide-open aperture, and two hours later when the movie finished, I clicked the shutter closed. That evening, I developed the film, and the vision exploded behind my eyes.”

Hiroshi Sugimoto was born in Tokyo in 1948. He graduated from Saint Paul’s University in Tokyo in 1970, and from the Art Center College of Design in Los Angeles in 1974. In the same year he moved to New York, where he lives and works today. A versatile figure, he has developed his artistic practice mainly through photography, sometimes associated with sculptural objects, architectural structures and experimental exhibition set-ups. His photographic works investigate the interrelationship between humans and time, nature, art, life and history, science and religion, combining Eastern meditative ideas with elements of Western culture. Time is the dominant theme in the work of Sugimoto, who has always been interested in finding solutions to the problems of representation and visualization that it poses. Over the years his output has been distinguished by numerous photographic series with different characteristics and themes, including: Dioramas (1976), featuring photos of stuffed animals; Theaters (1978); Seascapes (1980), photos of seascapes showing just two elements, air and water; Portraits (1999), in which the subjects are waxworks of famous figures, the height of the concept of immortality. The desire to engage with the reproduction of what is not representable has led the artist, over the years, to deal with tan gible models for expressing theoretical and spiritual concepts, such as the curved surfaces of Conceptual Forms: abstract mathematical formulas and concepts rendered into images through the photographic reproduction of ancient and enigmatic “mathematical models” (small sculptures produced in an effort to make the invisible visible, giving form and tangibility to trigonometric functions and all kinds of theorems and abstractions). Sugimoto has exhibited in museums around the world, and his works are held in many prestigious collections: Metropolitan Museum of Art, New York; Moderna Museet, Stockholm; Centre Georges Pompidou, Paris; Museum of Contemporary Art, Tokyo; Museum of Modern Art, New York; National Gallery, London; National Museum of Modern Art, Tokyo; Smithsonian Institution, Washington, D.C.; MACBA, Barcelona; Tate Gallery, London. Major solo shows include those mounted at the Palais de Tokyo in Paris (2014), the Solomon R. Guggenheim Museum in New York (2013), the Hara Museum of Contemporary Art in Tokyo (2012), the Scottish National Gallery of Modern Art in Edinburgh (2011), the Neue Nationalgalerie in Berlin (2008), the de Young Museum in San Francisco (2007), the Hirshhorn Museum in Washington D.C. (2006), the Mori Art Museum in Tokyo (2005), the Fondation Cartier pour l’Art Contemporain in Paris (2004), the Guggenheim Museum in Bilbao / Deutche Guggenheim in Berlin (2000), and the Metropolitan Museum of Art in New York (1995). In 1988 he was awarded the Mainichi Art Prize, and in 2009 the Japanese Art Association’s Praemium Imperiale; in 2001 his work won the prestigious Hasselblad Foundation International Award and in 2014 the Isamu Noguchi Award.
www.galleriacontinua.com