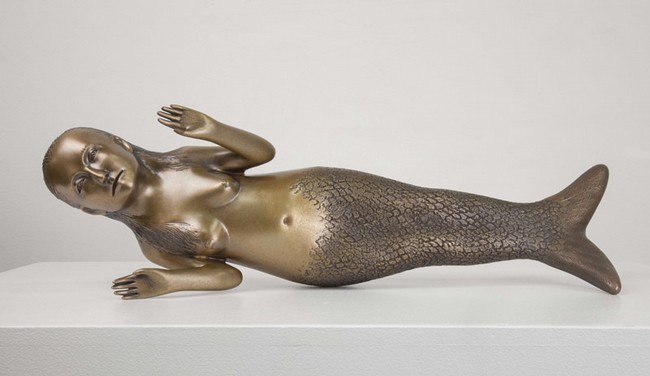 Galleria Continua is pleased to host, for the first time, a solo show by American artist Kiki Smith.
With over 150 one-person exhibitions around the world, she is a prominent figure in contemporary art.

Kiki Smith’s career is distinguished by constant experimentation. She has used wool, cloth, glass, malleable wax, earthenware, bronze, steel, stone, wood, paper, plaster, plastic resins and organic elements. Her works range from sculpture to drawing, video to installation, in addition to photography, printmaking and jewellery. This exhibition at the Arco dei Becci gallery space will include her recent bronze sculptures with gold and silver leaf, as well as a number of large tapestries. “ I love tapestries ”, Smith says, “ I think they are sacred, and are like a blanket. They protect you from the world, creating a cushion between you and the world. Mine are fabrics on Jacquard frames, and are different from traditional handmade fabrics... I make an original drawing, then a lithograph, then a collage and finally the colour is painted. The tapestries enable me to work intensely with colour, and I like this. ” The artist’s desire for an intimate and domestic setting to house the show – a selection of sculptures, stained glass pieces and drawings – has led to one of San Gimignano’s historic homes being opened to the public for the first time, inviting viewers through a series of rooms overlooking the beautiful Piazza della Cisterna. The unusual exhibition path ends up in the gallery’s garden, for which the artist has produced a bronze fountain.

Smith’s work is layered with meaning, metaphor and paradox. The core of her poetics is the representation of the body – its perishability and vulnerability, its fragility and its strength.
Smith’s early works speak of bodies riveted by the drama of their organic finiteness, of lacerated, cut-up bodies; a vision rooted in both medieval iconography and nineteenth-century science. At the end of the 1990’s, her figures became more compact and their narrative became a sacred story. Her recent sculptures, paper works and installations are populated by birds, wolves and mythological figures. While this bestiary stems from antiquity, it is neither geographically nor historically situated. Smith’s subjects are part of a collective memory.
Kiki Smith’s exhibition at Galleria Continua explores the relationship between the human being and nature, between the body and the world, between the natural kingdom and the spiritual one. In these works, narrative becomes fable, myth, a site of memory and a representation of the unconscious. Her work moves adroitly through different cultural territories; the collective unconscious; identity; nature and thought.

Kiki Smith was born in Nuremberg in 1954, grew up in New Jersey, and moved to New York City in 1976, where she lives and works today. At the end of the 1970’s, she was a member of COLAB (Collaborative Project Inc.), a collective of artists addressing social issues that operated outside the traditional gallery system. In 1980, COLAB organized the retrospective Times Square Show, to which Smith contributed her first work on the body. After showing in group exhibitions on the fringes of the traditional gallery circuit, Smith started taking part in exhibitions at major international institutions in 1990 including the Museum of Modern Art in New York, the Centre d’Art Contemporain in Geneva, Institute of Contemporary Art in Amsterdam and then, amongst others, in 1993 the Österreichisches Museum für Angewandte Kunst in Vienna. In 2005, Smith had her first retrospective at the San Francisco Museum of Modern Art which traveled to the Walker Art Center in Minneapolis, the Contemporary Arts Museum in Houston, the Whitney Museum of American Art in New York and the La Colección Jumex in Mexico City. The 2008 exhibition Kiki Smith:
Her Home traveled from the Haus Esters Museum in Krefeld to the Kunsthalle of Nuremberg, the Fundació Joan Miró in Barcelona and the Elizabeth A. Sackler Center for Feminist Art of the Brooklyn Museum in New York. Smith’s Biennale appearances of note include the Whitney Biennial of New York (1991, 1993, 2002), the Florence Biennale (1996–1997; 1998) and the Venice Biennale (1993, 1999, 2005, 2009, 2011). Amongst her more recent exhibitions are Les Papesses at the Palais des Papes in Avignon; a three-person exhibition with her father and sister’s work: Kiki Smith, Seton Smith, Tony Smith at Kunsthalle Bielefeld, Germany which traveled to Kunstmuseum Liechtenstein, Vaduz and Festival International d’Art de Toulouse: Artist Comes First, Les Abattoirs, Musée d’Art Moderne et Contemporain à Toulouse; Fiber Visions at the Zhejiang Art Museum, on the occasion of the Hangzhou Triennial in China. Works by Smith are housed in over fifty public collections around the world. She has also received many awards including the United States Art in Embassies Award (presented by Hillary Clinton in 2012); the Theo Westenberger Women of Excellence Award (2010); the Nelson A. Rockefeller Award, Purchase College School of the Arts (2010); the Women in the Arts Award, Brooklyn Museum (2009); the 50th Edward MacDowell Medal (2009); the Medal Award, School of the Museum of Fine Arts, Boston (2006); the Athena Award for Excellence in Printmaking, Rhode Island School of Design (2006); and the Skowhegan Medal for Sculpture (2000). In 2006 TIME magazine listed her among the TIME 100 most influential people in the world. She has also been elected a member of the American Academy of Arts and Letters and the American Academy of Arts and Sciences.
www.galleriacontinua.com