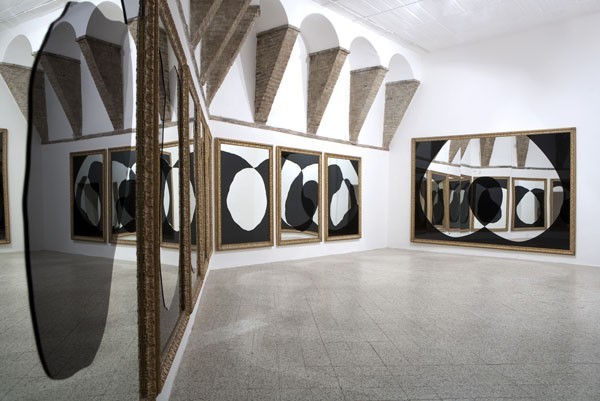 Galleria Continua is pleased to welcome back to its San Gimignano gallery space one of the great protagonists of the international art scene: Michelangelo Pistoletto.

The artist is presenting a series of previously unshown works constituting a new project entitled Buco nero (Black Hole). The works conceived for this solo exhibition represent an effective evolution of some of the key concepts on which Pistoletto’s practice has been based since the start of his career in the early 1970s.

One of the characteristic materials of the artist’s work, the mirror, is employed in two new wall installations. Talking of the mirror, the artist observes: “The mirror only exists if it reflects, otherwise it is nothing, it loses its function. Identifying myself in the mirror I wondered: If I am mirror how can I recognize myself... without a mirror? I had to give it a double so it could reflect and be/call itself mirror. Absurd, isn’t it? Then, cutting the mirror I saw a third mirror, its firstborn, also reflecting. And one could carry on to infinity. (...) The process of acting and breaking a mirror is a way of rendering physical the action of dividing-to-multiply. Without a physical action there is no metaphysics. And also of saying something about time. Time as ‘past’. Black forms remain on the broken mirror, the document of an act, an instant photo imbued with memory of a past. The mirror refers us to a creative act that is already ‘past’. That black was a ‘present’. The paradox is that the mirror becomes a witness both of pastness and of becoming. The mirror is the nothingness that contains everything, even that which has yet to become. In the mirror the present is possibility. There is also that which has not yet been revealed.”

Silver and black mirrors in succession, circular and elliptical forms evoking the sign of infinity and the cyclical nature of time – this is the dominant theme of the works presented in the Arco dei Becci exhibition space.

Between 1965 and 1966 Michelangelo Pistoletto produced and showed, in his studio, a set of works entitled Oggetti in Meno (Minus Objects), realized in the contingent dimension of time and based on the principle of differences, thereby breaking the dogma of the uniformity of individual artistic style. These works are considered fundamental for the birth of Arte Povera, the artistic movement theorized by Germano Celant in 1967, of which Pistoletto was a key protagonist. “(...) The works I do are not intended to be constructions or fabrications of new ideas, just as they are not meant to be objects that represent me, to be imposed on or to impose myself on others. Rather they are objects through which I rid myself of something – they are not constructions but liberations – I don’t regard them as plus objects but minus objects, in the sense that they carry with them a definitively externalized perceptual experience.” (M. Pistoletto, Minus Objects). The well placed by Pistoletto in the gallery’s exhibition space is in keeping with and pursues this line of thought.

Exactly as on the threshold of a mirror painting, this succession of works that reference each other positions Michelangelo Pistoletto’s artistic practice in a temporal dimension that includes past, present and future.


Michelangelo Pistoletto was born in Biella in 1933. When he was 14 years old he began an apprenticeship in the studio of his father, a painter and restorer; subsequently he attended the advertising graphics school run by Armando Testa. In 1960 he had his first solo exhibition in Turin. In 1961-62 he produced his first Quadri Specchianti (Mirror Paintings), which gave rise to a new “retrovisual” perspective that directly included the presence of viewers and introduced the active dimension of time into the picture. In 1963 he contributed to the Dessins Pop exhibition at the Sonnabend Gallery in Paris, and then went on to show in the most important international-level exhibitions devoted to Pop Art and Nouveau Realisme. In 1964, with I Plexiglas (The Plexiglases), which showed at the Galleria Sperone in Turin, Pistoletto also defined the theoretical premises of Conceptual Art.
In 1965 and 1966 he produced a group of works entitled Oggetti in Meno (Minus Objects) based on the principle of difference. These gave rise to Arte Povera, the movement theorized by the critic Germano Celant and recognized internationally as one of the most important art trends of the 20th century. In 1967 Pistoletto formed an intersubjective group called Zoo, which combined visual art, theatre, music, dance and so on, and performed throughout Europe. At the Venice Biennale in 1968, he presented the Manifesto of “Creative Collaboration”. In the same year he won an award at the Biennial of São Paulo.
In the 70s he continued to explore and develop the mirror theme in works and actions such as Divisione-Moltiplicazione dello Specchio (Division-Multiplication of the Mirror) and L’Arte assume la Religione (Art Assumes Religion). Furthermore, between September 1975 and October 1976, he produced a temporally extended work entitled Le Stanze (The Rooms), consisting of a one-year exhibition divided into twelve one-month expositions. This was the first of a series of shows contained within the time span of a year and collectively named as “Continents of Time”; these include Anno Bianco (White Year, January-December 1989) and Tartaruga Felice (Happy Tortoise), for Documenta at Kassel in 1992. In 1994, at the Marstall Theatre in Munich and at the same time at Palazzo Comunale in Pistoia, Pistoletto made public his “Art Project” Manifesto, which, through an ethical and aesthetic commitment, places art at the centre of the search for “responsible social transformation”.
From 1991 to 2000, he taught at the Vienna Academy of Fine Arts. In the same period he set up Cittadellarte-Fondazione Pistoletto, a multicultural and multisectorial centre in Biella. In 2002 he received a Diploma for Meritorious Services in Culture and the Arts from the Presidency of the Republic. In 2003 he was awarded the Golden Lion for Career Achievement at the 50th Venice Biennale. In March 2004 he received an honorary degree in Political Science from the University of Turin. In May 2007 he received the Wolf Foundation Prize in Arts in Jerusalem “for his constantly inventive career as an artist, educator and activist, whose restless intelligence has created prescient forms of art that contribute to fresh understanding of the world”. In 2008 the Premio Speciale Città di Sasso Marconi was conferred on Pistoletto – Cittadellarte for innovation in artistic languages. A retrospective show due to open at the Contemporary Art Museum in Philadelphia in October 2010 is in the final phases of preparation. He was recently appointed artistic director of Evento 2011 in Bordeaux.