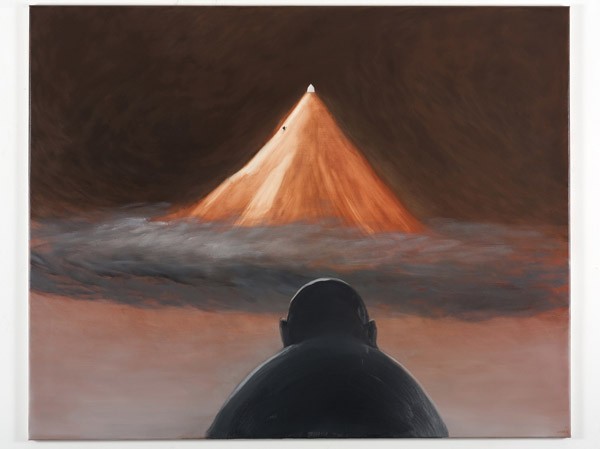 Galleria Continua is pleased once again to host a solo exhibition by the Bulgarian artist Nedko Solakov in its San Gimignano gallery.

At the centre of the new exhibition project is I Want Back Home (said the big frog), a complex installation set up in the gallery’s stalls area, and Paintings with No Texts, twenty large oil paintings on canvas, produced especially for the show. This new body of works comprises the largest series of paintings ever realized by the artist.

A prominent figure on the international art scene, Nedko Solakov has developed his work in a perfect balance between form and content, tradition and rupture.

The artist employs a range of techniques, characterized by an explicit, immediate and often disorienting language that lays bare the conventions of everyday life and dwells on our thought mechanisms and on the relationship between personal and collective history, the private sphere and the social dimension, reality and imagination. Fascinated since childhood by fairy tales (and their horrors), the artist enjoys wrong-footing, deviating, inverting and subverting. Solakov has a natural propensity for the fairy story, and his drawings conjure up fantastic worlds and bewitching characters that leap out from the sepia and the black and white ink. Knights and other dreams – realized and unrealized – are the subject of Knights (and other dreams), presented at dOCUMENTA (13) in Kassel in 2012. The project developed out of a four-minute video shot by the artist in 2010 during a meeting with Oleg Kovachev, who, as a child, starred in one of Bulgaria’s best films, Knight Without Armour (1966). Taking the testimony of “the former knight without armour” as a starting point, Solakov staged a kind of childish dream in which the (invented) desire to possess a real knight’s suit of armour, rather than to have a small radio/infrared-control-driven helicopter or to play in a rock band, is accompanied by other stories, the stories of many people who, in one way or another, we can recognize as the heroic knights of our times.

The overlapping of the imagination and the personal life of the artist give rise to works like I Want Back Home (said the big frog). The installation consists of 14 showcases and an equal number of videos which, through photographic images, texts, notes and recordings, document the 14-day journey made by the artist in order to take part in an exhibition at the Rockbund Art Museum of Shanghai. Solakov is afraid of flying, so he decided to travel with his wife to China by train and with Joji, a toy frog he had bought a few years earlier in a shop in New York’s Chinatown for one of his installations. The artist’s reason for embarking on the long journey was his wish to fulfil Joji’s desire to return to his city of “birth” – Shanghai . The frog is the main hero of the 14 chapters recounting this “return home”. The story winds its way through the geography and atmosphere of the countries crossed by the Trans-Siberian railway: Bulgaria, Romania, Moldova, Ukraine, Russia, Mongolia and, finally, China. It is a journey underpinned by irony and sadness, which concludes with Joji’s amazing declaration, after circling the world: “I want to go back home, to Sofia!”

In Paintings with No Texts, the narration – a characteristic feature of Solakov’s style – is developed exclusively in the form of images. Powerful, poetic and visionary, the paintings are completely devoid of any form of writing, with the exception of the title on the right-hand side of each canvas’s stretcher. “The fact that there are no texts on the painted surface can be regarded as a kind of reaction to all the texts and narratives I have used in the majority of my works”, comments the artist.

Also featuring in the show is another new work, A Rather Split (visually) Personality, an ironic self- portrait set within a specially designed, richly gilded frame. This work highlights Solakov’s inclination to unify and separate his various artistic personalities (as numerous as the styles represented in the unusual frame), experimenting with different visual forms in an effort to elude an immediately recognizable modus operandi. “Today”, says the artist, it is much simpler to play with the diversity of my work. At the beginning of the 1990s, my output was considered too heterogeneous to be attributed to a single artist. Now this diversity has been completely accepted, and represents an added value which makes the solo shows visually attractive.”

Nedko Solakov was born in Tcherven Briag, Bulgaria, in 1957. He lives in Sofia. His work has been shown at Aperto ‘93 (Venice Biennale); at the 48th, 49th, 50th and 52nd Venice Biennale; the 3rd, 4th and 9th Istanbul Biennial; the São Paulo Biennial in 1994; Manifesta 1, Rotterdam; the 2nd and 4th Gwangju Biennale; the 5th Lyon Biennale; Sonsbeek 9, Arnhem; the 4th and 5th Cetinje Biennial; the 1st Lodz Biennale; the 7th Sharjah Biennial, Arab Emirates; the 3rd Tirana Biennial; the 2nd Seville Biennial; the 2nd Moscow Biennale; Documenta 12; the 16th Biennale of Sydney; Prospect.1 New Orleans; the Singapore Biennale; the 11th Cuenca Biennial in Ecuador; dOCUMENTA (13) and the 1st Tbilisi Triennial in Georgia. He has had solo shows at the Museu do Chiado, Lisbon; Stichting De Appel, Amsterdam; CCA Kitakyushu, Japan; Museo Nacional Centro de Arte Reina Sofía, Madrid; Israel Museum, Jerusalem; Centre d’Art Santa Monica, Barcelona; Kunsthaus of Zurich; Castello di Rivoli; Sofia City Art Gallery; the Kunstverein in Amsterdam. In 2003–2005 a major retrospective of his work, A 12 1/3 (and even more) Year Survey, was held at the Casino Luxembourg, Rooseum Malmoe and O.K Centrum Linz. In 2008–2009, his Emotions project was shown at the Kunstmuseum Bonn, Kunstmuseum St. Gallen and Mathildenhoehe, Darmstadt. Between 2011 and 2012, the exhibition All in Order, with Exceptions toured to the Ikon Gallery in Birmingham, the Fondazione Galleria Civica in Trento [All in (My) Order, with Exceptions], the Stedelijk Museum voor Actuele Kunst / S.M.A.K. in Ghent and the Museu de Arte Contemporanea Serralves in Porto.
www.galleriacontinua.com