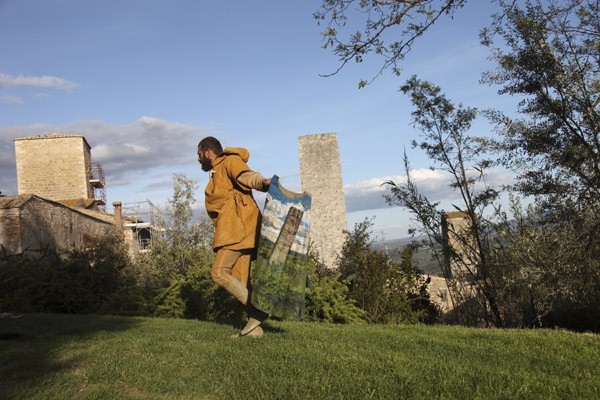 “He who walks with difficulties along the road of virtue, even if it be both rocky and full of thorns, at the end of the climb finds himself at last in a broad plain, with all the happiness he yearned for. And looking down, seeing the cruel path he has trodden amidst perils,... with great contentment blesses those labours that had earlier caused him so much pain. And so making up for the suffering of the past with the delight of the present, without toil though he tries to make those who watch him understand how the heat, cold, sweat, hunger, thirst, and hardship he suffered to acquire virtue, may free others from poverty and lead them to that safe and tranquil state....” Giorgio Vasari, Vite de' più eccellenti pittori, scultori e architettori italiani, da Cimabue insino a' tempi nostri (1550), quoted by Cristina Acidini Luchinat in her biography Benozzo Gozzoli* (Scala Publishing,1994).

*Notes: Benozzo Gozzoli was the artist who painted in 1464 the celebrated fresco cycle, Storie della vita di Sant’Agostino (Scenes from the Life of Saint Augustine), in the chapel of the choir in the Church of Sant'Agostino in San Gimignano.

Galleria Continua is pleased to present inside out, the first solo show in Italy by the Indian artist Nikhil Chopra.

Chopra’s artistic practice ranges between live art, theatre, painting, photography, sculpture and installations. His performances, in large part improvised, are a critical investigation of post-colonial Indian subjectivity, which he describes as being “obsessed by nostalgia for the British Raj”. Through the direct experience of performance, the artist examines themes relating to colonialism, racism, exoticism and sexuality. His work dwells on issues such as identity, the role of autobiography, the pose and self-portraiture, reflects on the process of transformation and the part played by the duration of performance. Taking autobiographical elements as his starting point, Chopra combines everyday life and collective history; daily acts such as eating, resting, washing and dressing, but also drawing and making clothes, acquire the value of ritual, becoming an essential part of the show.

inside out is a site-specific performance conceived by Chopra for the Galleria Continua in San Gimignano. The performance, the longest realized to date by the artist, will last for 99 hours, beginning at 11 am on Wednesday 25 April and ending at 2 pm on Sunday 29 April. During this period of time, the artist will assume the guise of different personae to embody history and memory, and will walk around in the streets of the town and in the surrounding area. In the course of the performance, Chopra will produce a series of drawings of San Gimignano and of the Tuscan landscape. The drawings and their installation will be executed both outside and inside the Arco dei Becci exhibition space, which will be the artist’s abode for the duration of the performance. The installation, the result of four days of performance, will remain on public display until 20 August 2012. The costumes for the performance inside out are designed by Sabine Pfisterer.

Nikhil Chopra was born in Calcutta in 1974, and lives in Mumbai. After studying at the Faculty of Fine Arts at Maharaja Sayaji Rao University in Baroda, India, the artist continued his studies in the United States, where, in 2003, he had his first solo exhibition, SIR RAJA II. A few years later he once again showed in the States, in collective exhibitions in 2005 and 2006, the latter at the Brooklyn Museum of New York. Recent shows include the solo exhibition Yog Raj Chitrakar: Memory Drawing IX, at the New Museum of New York in 2009, and the group shows Production Site: The Artist’s Studio Inside-out at the Museum of Contemporary Art in Chicago (2010); Generation in Transition: New Art from India at the Zacheta National Gallery of Art in Warsaw (2011). The artist recently made the film Man Eats Rock in collaboration with Munir Kabani for the H Box, presented at the Artsonje Center in Seoul, at the Today Art Museum in Beijing and at the Guangdong Museum of Art in Guangzhou (2011).

Sir Raja, Yog Raj Chitrakar and, more recently, Drum Soloist, are the characters who have given form to Chopra’s narratives in recent years. The figure of Sir Raja was born in 2002 during the time the artist spent in the United States, and was inspired by a series of portraits of maharajas and Indian nobles by the late nineteenth-century photographer Raja Deen Dayal. Yog Raj Chitrakar, on the other hand, was inspired by Yog Raj Chopra, the artist’s grandfather, who studied painting in England in the
1930s, and used to paint landscapes of Kashmir. “My grandfather’s paintings adorned the walls of our
family home. I would look at them for hours when I was growing up. They evoked in me a profound nostalgia for a place which became inaccessible to us after 1989, when the Kashmir separatist movement began to gain ground. His paintings were like windows on the past: on summers spent at my grandparents’s home next to a river and surrounded by the unspoilt mountains of the Himalayas.” In Chopra’s interpretations, Yog Raj becomes an endlessly versatile, many-faceted figure: Victorian dandy and traveller, man and woman, painter and soldier. His drawings and landscapes offer themselves to us as a kind of chronicle of the world in which we live. During recent stay in Berlin (2011-2012), Chopra has taken to more expressionistic personae where the drawings have extended on to his costumes and body to create a grotesque blackened or whitened self.
www.galleriacontinua.com