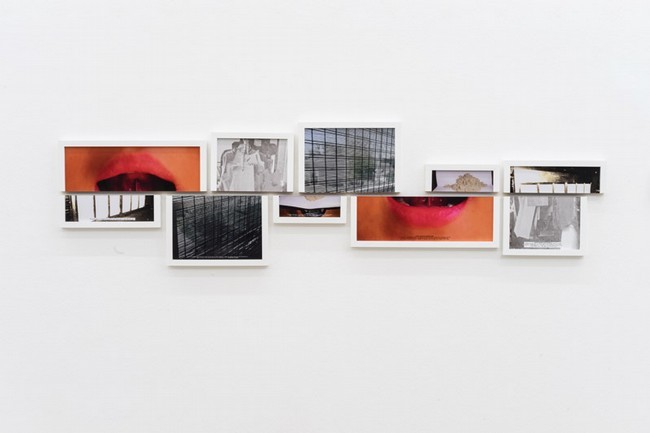 Galleria Continua is pleased to once again host a solo show by Shilpa Gupta in its exhibition spaces.

While training in sculpture, the Indian artist began to work experimentally with a wide range of media, including video, photography and interactive mixed media installations. Mid 2000’s Gupta already occupied a prominent position on the international art scene. The show prepared by the artist for the former cinema-theatre of San Gimignano includes a large number of works produced specially for the occasion – objects, images, interactive sound installation – and some recent works.

Technology for Gupta is a kind of extension of everyday reality, a narrative tool but also a subject/object of inquiry. The artist is interested in human perception, in how information, either visible or invisible, is transmitted and interiorized in daily life. Constantly drawn by the definition of objects and by mechanisms for identifying places, people and experiences, Gupta explores the zones in which these definitions acquire form, whether this concerns borderlines, labels or notions of censorship or security. Her work involves the viewer, creating intimacy and setting up an intense and never didactic dialogue.

Gupta asked a hundred people to draw from memory a map of the place where they live. This gave rise to 100 Hand Drawn Maps, a work with intimate and delicate features that reflects on the theme of belonging, on the complexity of the concept of the frontier – real, imaginary, political, geographical – but also on the power exercised by institutional forces through cartography. The tryst with the uncontainable edge of a nation is explored in many other works in the show, for instance in Untitled 2014, a set of six pieces of hand woven fabric ranging in size from A0 to A5. “I use incremental measurements”, the artist explains, “because we surround ourselves with measures, say a simple sheet of ‘A4’ paper that we slip into a printer”. The line embroidered on each sheet represents a ratio of the barbed wire barrier India is building 150 yards inside the zero line, along the border it shares Bangladesh and which, once complete, will be one of the largest fence in the world. Fencing and measuring also return in 1:1132755, a brass (a material used in museums for archiving historic data) needled staff installed between the wall and floor of the gallery as if to define a non-space. Etched into the pole are the words “2762.11 Kms of Fenced Border– East. Data Update - March 31, 2013”. Precise factual data, proportional relations are accompanied in Shilpa Gupta’s

work by deliberately concealed notions – the names of the two nations in this case – serving as a warning that the passage of time just like the movements of people render vain any attempt to schematize or to label. The sound installation Speaking Wall speaks of a border drawn in sand that is constantly shifted by wind and rain. Listener and narrating voice enter into contact through a poetic monologue on borders, not just geopolitical but also strictly pertaining to the space of the installation, triggering a series of reflections on the sense of distance, on surveillance and on bureaucracy

Gupta recounts the story of a world that is constantly in search of identity and in constant transformation. The artist gathered stories of people who, for various reasons, be it fear of political percecution, social prejudice, personal aspiration or embarassment, decided, at a certain point in their lives, to change their surname. Initially, the search was limited to her circle of relatives and friends, but over time it was also extended to areas not known to the artist, until more than one hundred stories of changed surnames emerged. Formalized as a kind of archive, these fragments of stories cover a trajectory running from the personal to the collective sphere. “When you fill in a form, the first thing that you are asked for is your surname” explains Gupta. The original function of the object that Gupta uses for the installation 24:00:01 is to transmit information about the arrivals and departures. Positioned in a place where our stay is effectively temporary, the screen communicates automatically a sense of transitoriness that becomes amplified with the reading of the intentionally fragmentary text which the artist has composed for the work and which runs on the display. Written in the first person, it also develops as a meditative monologue dotted with orthographic errors or omissions that dwells upon fragility, migration, role of the media.

Shilpa Gupta was born in 1976, in Mumbai (India), where she lives and works today. The artist has had solo exhibitions in Asia, Europe and the United States, especially, in recent years, at: Kunstnernes Hus, Oslo; MO Mucsarnok Kunsthalle, Budapest; MAAP Space, Brisbane; Contemporary Art Center of Cincinnati; Museum voor Moderne Kunst, Arnhem; Arnolfini, Bristol; Castle of Blandy, France; and the OK Center for Contemporary Art in Linz. Gupta took part in the Triennale Younger Than Jesus, New Museum, New York; the Lyon Biennale, curated by Hou Hanru; the Biennale of Gwangju, directed by Okwui Enwezor and curated by Ranjit Hoskote; the Triennale of Yokohama, curated by Hans Ulrich Obrist; the Biennale of Liverpool, curated by Gerardo Mosquera; and the Biennali of Auckland, Seoul, Havana, Sydney and Shanghai; in 2013, she took part in the Biennale of Sharjah, curated by Yuko Hasegawa, and in 2014 at the 8th Biennale of Berlin, curated by J.A. Gaitan, and at the Dhaka Art Summit Festival. Her work has been shown in prestigious international institutions such as the: Tate Modern, Serpentine Gallery, Fondazione Sandretto Re Rebaudengo, Daimler Chrysler Contemporary, Mori Museum, New Museum, Chicago Cultural Center, Centre Pompidou, Louisiana Museum and the Devi Art Foundation in Gurgaon, and in 2014 alone, the Guggenheim-USB in collaboration with Singapore’s Centre for Contemporary Art, the City Art Centre of Edinburgh, the OCT Contemporary Art Terminal of Shanghai, the Museum of Fine Arts in Houston, the Faurschou Foundation in Copenhagen and the National Museum of Modern and Contemporary Art of Seoul.
www.galleriacontinua.com