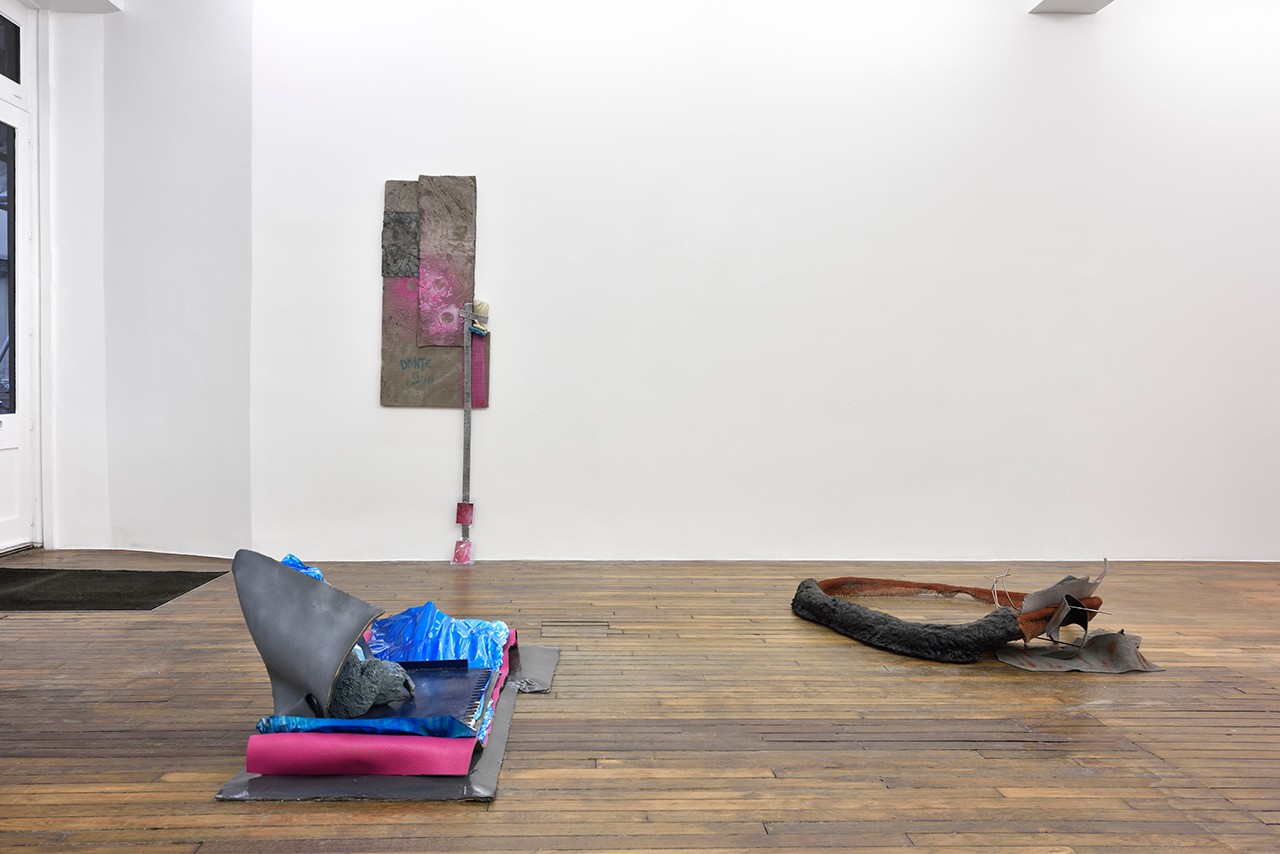 Let’s start by qualifying the impetus that shapes your work. A form of violence goes through your production. Let’s talk more of vigour, of the necessity of acting firmly, here, now. Is it urgent? Because disaster seems to prevail when we observe the elements that make up your vocabulary. Is it best to destroy to better rebuild?

I don’t know if I really build. Building takes time, takes a certain form of planning. And yes, I get the impression that I don’t have the time, that it is urgent. The gestures are simple and the materials are available quickly. It must be intense and swift, sometimes it ends badly, but a trace of the encounter remains, and it’s this trace that will go beyond the existence of the sculpture. It is also a question of survival; how to erect a sculpture like one would build a barricade, how does a sculpture become a shelter – or the opposite -, and if I needed to lay tiles or a primer in a few minutes, what would my gestures be? Except that it isn’t fiction, even if I can’t identify specifically what pushes me in this necessity to act here, now. The simple and radical gestures enable me to see the objects as presences, they become subjects and the memory of their use is ghostly, slightly lost between two worlds. The tents will not shelter anyone, the barricades will not protect me. The transformation is irreversible but there are still signs of the previous state. A transgender sculpture.

When you make up your materials, it’s often according to this rich range that troubles the recognition of the support. What is your relationship to the added colour?

There is colour but also matter. This metal paint is very heavy and stodgy, just like primer and adhesive tape that are in between two states, at once liquid and solid. Thanks to them, a piece takes form in a simple and immediate manner. Always this probable relationship to urgency; these are materials one can find quickly, their implementation is really simple for a maximum effect. One can mimic the metal, the concrete, the ceramic. Identities are not fixed. It’s make-up, a farce.

For your personal exhibition at the Galerie Thomas Bernard, you continue a collaboration with the Ceralep factory. Can you describe what are the materials and gestures you use in this factory?

Ceralep is a Worker’s Production Cooperative that produces industrial ceramic and is managed by an incredible man, Robert Nicaise. He has been working in this factory since his teens, just like his father before him. He is a perfect mix between a creator and a worker, with huge technical knowledge and a curiosity that allows us to test the possibilities of the soil and the objects produced in the Cooperative. We fuelled with raw material an old machine put back into service and from which tubes constantly emerge, pushed by a press system. I fuelled the machine and chose the length of my arm as a scale for cutting pieces. Laid out on a work table, the pieces that are formed were grasped, bent, split, torn, caressed, flattened, massaged, marked with motifs. Rather than coating them with enamel, I chose to cover them with a primer that is usually used as glue to fix metallic pieces onto the edge of ceramic, that are used to conduct electricity. The end of the production will happen in my studio.

Ceramic can be associated with the creation of small insipid things in which one can sip tea. I have noticed that your approach of this medium is materialised by the intermediary of a cooperative making electric insulators for high-tension lines. Porcelain, yes, on condition that for almost a century, it has been chain-produced by extrusion machines in a huge racket and cooked in terrifying ovens of several cubic metres size. Without talking of megalomania because your passion seems to be elsewhere, what is your fascination for such scales, and such power?

I was never attracted by this technique. I loved the soil with which we made kilos of cob and clay plaques for the exhibition at the Salle de bains in 2012. I was also staggered by Fontana’s ceramics that had me on the floor with his miniscule Bataglia, but didn’t feel like testing it myself. And all this infatuation for ceramic, it was almost an act of resistance not to touch it. Everything started with the encounter with Ceralep, the greatness and strength one feels there. They work with this material, on an incredible scale, with traditional savoir-faire, as well as the means of the industry and Robert’s creative spirit. Basically, perfection. The body is penetrated by this energy, just like when faced with Fontana’s battles, or when we are lost in the immensity and strength of a landscape. It is the opposite of megalomania, I want to be an extra machine, to dissolve myself in this chain of production that starts in the warehouses storing raw materials, and ends in the waste disposal of faulty pieces behind the factory.

When we worked together for Les épis Girardon, I unloaded a pile of metal from a van that had been delivered to you at Moly-Sabata. Two weeks after you had come to use this material, a large steel hanging radiated in the Rhône’s reflection. Whereas we talk a lot of hostility when referring to your sculptures, here the gestures are calm. Delicately tightened knots, a soft scale, elements rolled in the palm of the hand. Do you decide to be sometimes brutal, sometimes delicate?

The two often coexist in the same piece. For the large hanging produced for Les épis, the main material is galvanised steel used to grip ceramic pieces to accelerate the drying of the earth by electrolysis. Once this operation has been done, these metal grills are just waste, with parts burnt by the electric current, and others still filled with earth. It is a material that is made very fragile by its first use and I didn’t want to add on this. On the contrary, I wanted to restore it, to sew the pieces back up, to treat them with softness, otherwise it would have been completely unusable. The large format imposed itself so that the alterations produced by the electrolysis became the strength of this metallic fabric. The quality of the colours of the earth residue, the glistening of the parts that still remained intact and the intensity of the burnt pieces all came together in the same flow.
The proximity of the Rhône and its riverbanks most probably also influenced my gestures. The water, the mud, the river that is sometimes clear and sometimes very dense and opaque. And also the story that you told me: the fish like luminous lightening bolts appearing on the surface of the water. I wanted to read Brautigan’s book (the title of the piece De l’acier en truite [Of steel in trout] comes from La pêche à la truite en Amérique [Trout fishing in America]) and it fitted perfectly. Some parts of the grill rolled on themselves, certainly due to the strength of the electric current. I accentuated this form. These embossed parts bring brutality: empty, sloughing fish carcasses, trophies, body fragments. Images came back up to the surface, Jamie Lanister walking about with his cut hand like an ornament on his clothing, Paul Thek’s piece (I must find the title), Brautigan and his wife in the river amongst the fishes.

But otherwise, this is life, is it not? One day we love everyone, the next we become warriors, and sometimes we just feel anesthetized. Sculptors also have their moods.

With the complicity of Moly-Sabata / Fondation Albert Gleizes.