Lynette Yiadom-Boakye: The Love Without 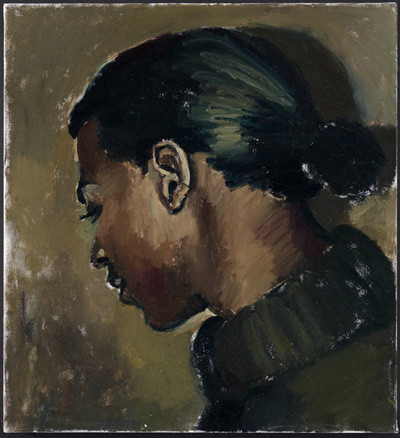 Tommaso Corvi-Mora is pleased to present new work by Lynette Yiadom-Boakye. The exhibition features a new series of paintings, including portraits and figures in landscapes. Her subjects, mostly black, are bold, often confronting the viewer; the works evoke a narrative that is up to the viewer to reconstruct. Speaking of her subjects the artist says: “Although they are not real I think of them as people known to me. They are imbued with a power of their own; they have a resonance – something emphatic and otherworldly. I admire them for their strength, their moral fiber. If they are pathetic, they don’t survive; if I feel sorry for someone, I get rid of them. I don’t like to paint victims”.

Lynette Yiadom-Boakye was born in 1977 in London, where she still lives. She will be the subject of a solo exhibition at the Utah Museum of Fine Arts, Salt Lake City, opening at the end of February 2013.

In 2012 she had solo exhibitions in London (Extracts and Verses, Chisenhale Gallery) and New York (All Manner of Needs, Jack Shainman Gallery). She was awarded the Future Generation Art Prize in December 2012. Recent group shows include The Souls – A Twice-Told Tale at CEAAC, Strasbourg; Dawn Chorus at Leeds Art Gallery; The Progress of Love at The Menil Collection, Houston and Fiction as Fiction (Or, A Ninth Johannesburg Biennale) at Stevenson Gallery, Cape Town.

The gallery is open Tuesday to Saturday 11am to 6pm.