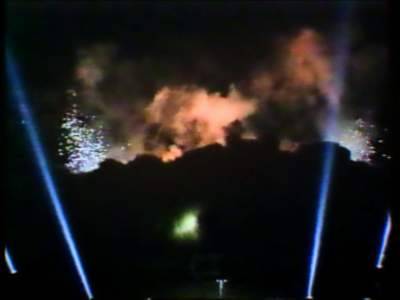 'One must ruin a palace to make it an object of interest.' (Denis DIDEROT, 1767)
Between vandalism and minimal aesthetic, romanticim and Land Art, Cyprien GAILLARD's works question man's traces in nature. The video Desniansky Raion (2007, 30'), presented for his first show at Cosmic Galerie, constantly alternates between order and chaos. Made of three parts, the video is introduced by a static shot of a building from the 70's, monumental triumphal arch at the entrance of the city of Belgrade.
The first section of the video shows a pitched battle between two hooligan gangs on the parking lot of a housing project in the suburbs of Saint Petersburg, filmed from a neighbouring building. Blues against reds, some wearing white gloves, the two compact groups move forward in an oragnised manner, then dismantle under shock before regrouping for a new assault. Calling to mind a battle scene in a medieval fresco or a classical painting, the outburst of violence, both savage and codified, is as repulsive as fascintaing.
The second part is a static shot of the façade of a high-rise block in the suburbs of Paris, on wich a show is projected mixing light, music and fireworks. This grandiose staging, usually saved for historical buildings, ends abruptly with the building collapsing. The hypnotic vision of this monolithic fortress, sublimated by light and fire before being reduced to dust, echoes like the first class funeral of the modernist architectural utopias.
The last section wanders through Desniansky Raion, a district in the suburbs of Kiev, filmed without flight clearance from a microlight, dangerously shaken by the wind, producing images both cinematographic and amateurish. Rising into a snowy and melancholic landscape, the multitude of stark buildings is at first disorderly; in this chaos of concrete then appears a group of towers arranged in a perfect circle, recalling the megalithic monument of Stonehenge, England.
Shot illegally or recovered through parallel channels, the three parts of the video demonstrate a very open minded relation to images and their status. Between classic references and contemporary tones, the soundtrack by musician KOUDLAM is a key part of the work and adds to its romantic side.
In the second room, Cyprien GAILLARD shows works from two previous series, both iconoclastic and pointing towards some of his sources of inspiration. In each of the five prints of series Belief in the Age of Desbelief, a distinct tower-block form is transferred into a Dutch landscape etching from the XVIIth century, hence transforming the naturalist visions of Rembrandt, Anthonie Waterloo and Jan Hackaert in as many building lands.
Finally, a photograph from the series Real Remnants of Fictive Wars (Part 6) , unveils Robert SMITHSON's iconic Spiral Jetty covered by a cloud of smoke. To carry out the short-lived Land Art works of this series, documented by 35mm films and photos, Cyprien GAILLARD and his accomplices activate in carefully chosen landscapes industrial fire extinguishers, releasing a thick white powder and creating a vaporous cloud as well as a veiled threat. He hence places the audience in an in-between situation, first seduced by the image of the art work before understanding the process of its creation – an act of vandalism that can be legitimized only in the art world. Through this Cyprien GAILLARD takes to his account the notion of entropy as defined by SMITHSON: a movement of transformation irreversibly aiming towards chaos.
Cyprien GAILLARD was born in 1980 in Paris (France). He lives and works in Paris. He will have a solo show at the Atelier du Jeu de Paume, Paris, next February.