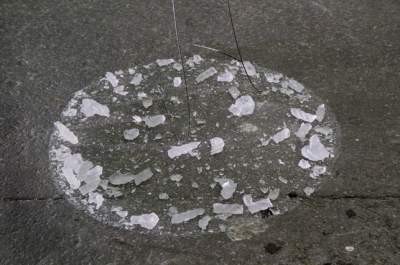 'Some parts of this press release are taken from the movie Contre-Histoire de la Séparation (2010), co-written by Etienne CHAMBAUD and Vincent NORMAND. It is about Étienne CHAMBAUD's first solo show at gallery BUGADA & CARGNEL, entitled Objets Rédimés (or 'Redeemed Objects'), but it also deals with a vocabulary issue, an interrogation about language where a new concept was invented, an historical anecdote, a translation problem and a series of falls.

In this show objects fall, and break.

The 'Objets Rédimés' are moulded glass reproductions of everyday objects: an umbrella, a bottle, a bag, a rope, a broom, a hammer, a pile of books*. From the heights of the exhibition space they fell, on its concrete floor they shattered. The gallery is the frame of interruption of these falls: the place where these objects are 'explosed', where the blasts happen, where the remains are shown.

There is only a predetermined amount of reproductions of each Objet Rédimé (Redeemed Object). One of them is destroyed during each exhibition, an Objet Rédimé can only be exhibited a limited number of times. Thus, the edition is not a series, but rather a number of possible exhibitions of an always unique object. The more you exhibit an Objet Rédimé, the less you can exhibit it.
To show it is to destroy it, or at least to limit its possibilities of future apparition. To exhibit it is to exclude it already.

Besides, 'to redeem' means to amend, to pay a debt. While Christ had to redeem men, each man can redeem himself, make amends for himself, pay back his debt—be it moral, judicial or financial. To redeem is to distribute, to undo, to undress even, and therefore to strip bare. Hence, an Objet Rédimé : object amending a fault, amending its own fault, or debt stripped bare?

Here, debt is paid in words.

Already there is play with words, over words, the Readymades are redeemed objects, and their redemption is double : an everyday object redeemed from its functionality, an art object redeemed from the work or talent of the artist signing it.
Comedy of mourning, comedy of the threshold of tongue, of tongues, word play cut by a translation and untranslatable: Readymade / Rédimé, traduisez s'il vous plait !

In 1915, when Marcel Duchamp defines part of his work by creating the concept of readymade, he does it in English: readymade. He had just settled in New-York, or in his own words he had just 'abandoned Paris'. It was astonishing that this concept was invented in English by a French artist who had emigrated, in a language that was not his language, nor the language it has become. English was not yet our lingua franca, not yet the world's vehicle-language. Was his choice of English, a very precocious premonition of its future hegemony, or the result of simple geographical and linguistic chance? And would the concept of Readymade have had such a huge success if it had been stated in another language?

Surely another product of historical and geographical chance: at the same time, in New York the public relations industry is born. Their father, Edward BERNAYS, is another European emigrant, and Sigmund FREUD's nephew. He was interested in contemporary debates on the psychology of crowds, he combined them with his uncle's psychoanalytic theories to set up methods using
subconscious psychology to manipulate public opinion for the first time. A press attaché for theatres and music-halls before WW1, he opened the world's first PR agency after he worked for state propaganda. Thanks to him, his peers and his successors, today there are press releases for art exhibitions.

Through the mediation of an imperfect homophony in French, the concept of Rédimé (Redeemed) is linked to that of the Readymade. But since it is impossible to translate, this filiation will be forever confined to footnotes, margins or, perhaps, press releases. Speaking of filiations, we should have spoken of Repentir in painting: an idea covered by another, an error corrected that can sometimes resurface, transpire, reappear. Survival or haunting of its origin. From Repentir to Rédimé, the vocabulary of debt and payback would have been spun.

To expose a Rédimé is to strip it bare. Its inside is rendered visible by the theatre of its outside. Simulacra of undressing, the stripping bare reveals itself as that which is hidden. Rédimé is the one who pays the debt of this rupture, strips the cut bare, exposes the off-sight in which the object of the series consists in the unique place, the one who retroverts the exhibition.

The contract describing the protocol of installation and preservation of each Rédimé is exhibited along with it. It constitutes its frame and is written in English. English law has a legal structure called Trust. This contracted trust frames the Rédimé: it is what links he who writes it, whomever exhibits it, whomever observes and thinks it and whomever conserves and destroys it.

Here, the objects of the exhibition are thus written in French and framed in English.

To 'write' an object is to think of it as both the sum of language strata that constitute it and as the mute gash that might traverse it.
The language of the 'written object' is performative: it cleaves what it says.

In the middle, there remains a fall of glass shards. That fall speaks of nothing but its interruption. Fall of a fall on itself, it is cut by what it produced : its own punctuation, its remains.

To haunt the space of the fall would mean to be its host; to remain there is, in a way, to become the remains.'