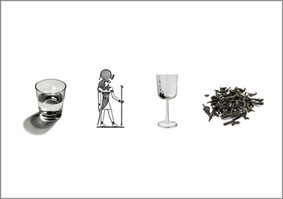 Screening of the film Counter-History of Separation every hour (duration: 52 minutes)

For his second solo show at the gallery, Étienne CHAMBAUD will present his new film Counter-History of Separation co-written with Vincent NORMAND (HD video, 52 min, 2010), along with a series of new two-dimensional works using objects and documents from the film.
This documentary film deals with two particular eras in French history: firstly, the post-Revolution period of 'la Terreur' ('Terror'), which would simultaneously witness the invention of the guillotine and the creation of the prototype of the modern museum with the opening of the Muséum central des arts de la République, ancestor of the Louvre. Secondly, the year 1977, when the last decapitation by guillotine occurred and the Centre Pompidou, a new museum paradigm, was inaugurated.
Through his film, Étienne CHAMBAUD questions the disintegration of the political functions of the guillotine and the modern museum in what he calls "the Decapitated Museum".