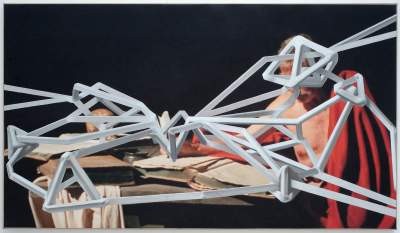 Ever Prosperity was a Liberty ship cargo vessel, based in Monrovia, Liberia. In 1965, she was wrecked on the West Coast barrier reef of New Caledonia. In 1970, her sister ship, who belonged to the same ship-owner, had been given the same name and the same Korean captain, met with the same destiny, just a few miles away from the first wreck. Braving the curse which ironically seems to weigh on this name yet so full of promises, the exhibition Ever Prosperity brings together works by five artists who apply here their artistic approach on pre-existent cultural material.

Thus, Wilfrid ALMENDRA confronts the Utopian forms of New Babylon, Dutch artist Constant NIEUWENHUYS' ideal urban project, with those of suburban neighbourhoods and industrial areas.
First through a pair of almost twin sculptures While Waiting for a Revolution (2010), each consisting of a triangular plinth – triangles being a recurrent form for Constant, linked to nomadism –, topped by a shape with a curving rim. One of the pedestals is made of boards recycled from palettes, bearing the stigma of an industrial process, the sanding of metallic parts: veins of wood are ploughed, and residues of paint have printed its surface; the other plinth, made of concrete, has been casted with the same boards, leaving their marks in negative. The shape on each pedestal takes that of a very sculptural water tower, who caught the artist's eye very early on; being the only construction in a provincial town to challenge the usual architectural typologies, it recalls observatories planned by Constant; the sculpture on the concrete plinth is covered with a veneering, recalling the outside of a formwork, whereas the other, on the wooden pedestal, is made of cast concrete. Wilfrid ALMENDRA therefore plays on the notion of positive / negative, and the notion of series, central in Constant's work.
The artist also worked on two blow up prints of photographs of small scale models of Constant's utopic city, anticipating their suburban destiny with heavy plaster and veneering (Second Skin, 2010).

Pierre BISMUTH, meanwhile, performs the impossible synthesis between the two faces of Le Corbusier: from the villas blanches to housing projects, with a sense of humor and economy of means that are his trademark. He superposes, in a small scale model, section views and computer generated images (Complexes des villas / Bâtiment Le Corbusier, 2006-2010), several Villas Savoye, to create a building that the Swiss architect might not have rejected – let alone the destiny of neglected social housing and the carcass of torched cars in front.

Gardar EIDE EINARSSON applies his black and white grid to a colorful painting by Roy LICHTENSTEIN, changing the register of that sea view, from Pop art to Abstract post-war (Seascape, 2010).

Nick DEVEREUX, as for him, orchestrates subtle back and forth: between movement and immobility, from Jackson POLLOCK painting to Hans NAMUTH's photos of him in his atelier; also over time, between CARAVAGGIO's paintings and the movie Derek JAREMAN directed on the Italian artist.
In his drawings as in his paintings, DEVEREUX works with an old technique, used for example by Diego VÉLASQUEZ in Las Meninas, which doesn't aim at creating a 'photo realist' image but focuses on information perceived by the human eye, ie essentially volumes and light, hence offering an original answer to the conceptual question of representation. DEVEREUX applies this technique not to human beings or objects, but to small sculptures he makes from scraps of fabric and pieces of glass; non-figurative, these sculptures, when reproduced with this distinctive technique, get animated with unsuspected life.
In the 'Pollock series', DEVEREUX draws on pages of the first French edition of Hans NAMUTH's book of pictures of Jackson POLLOCK painting in his studio, that were a crucial contribution to Action Painting's legend, propagating a sense of expressivity more efficiently the paintings themselves. Drawing from a unique scultpure, DEVEREUX erases images of POLLOCK and renders his moves as a complex, dynamic yet abstract web of lines. Between POLLOCK's Action Painting, NAMUTH's photographic caption of it and DEVEREUX's rendering of these images through one of his distinctive sculptures and drawing technique, appears a fascinating back and forth between movement and stillness.
In Version (DG 1986) (2010), Nick DEVEREUX applies a similar process to an image taken from the movie Caravaggio by Derek JARMAN, on the life of the Baroque painter, where several perfectly detailed tableaux vivants restage yet to be painted works of the master. On a print of Saint Jerome, which is itself a reproduction, DEVEREUX reproduces in painting a small scale model he created, inspired by movements building the original painting.

Lastly, in Art for the Public: Images from the Collection of the Port Authority (2009), Lisa OPPENHEIM revives the memory of works from the Port Authority of New York and New Jersey's collection of public art, stored in the basement of the World Trade Center and destroyed during 9/11. They now only exist in a 1986 catalogue, which gave it's title to the series, a gathering of fantomatic works. Meditating on this 'presence absence', Lisa OPPENHEIM rephotographed in silver emulsion all images and printed a positive and a negative of each, that she then superposed; but when positive on negative should cancel one another out, through slight misregistrations, a ghostly trace remains.
www.bugadacargnel.com