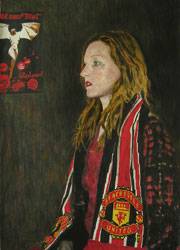 Dutch artist Iris van DONGEN became reknown in the last few years for her portraits of young women, between classicism and contemporary sensitivity. Usually of a large size, mixing pencil, pastel, watercolour and charcoal, each drawing pictures an isolated female character, often facing the viewer, still, almost statuary. Combining references to classical painting with contemporary elements, like objects associated with masculinity, these female characters, at the same time untouchable and vulnerable, dark and romantic, are as many different inside portraits of the artist, often borrowing her features.
While keeping on with her personal activity, Iris van DONGEN is now also part of Kimberly CLARK, a group she created with two other Dutch artists, Josepha de JONG and Ellemieke SCHOENMAKER. Iris van DONGEN's first exhibition in France is also the first official collaboration of this artist group with a subliminal name. Four new drawings by Iris van DONGEN are part of a larger set of works (sculptures, wall paintings and photographs) by Kimberly CLARK, creating a wide and coherent installation.
Wandering in the world of Kimberly CLARK, one goes from the day before the party to the party time, then to the aftermath of the party – from a messy hairdresser, both trash and glamorous, to a giant turntable spinning on the wall; from a red skeleton coming out of loudspeakers to a bench under which lays a pile of empty cigarette packs and lipsticks.
Three dummies, dressed with the artists' clothes, stand as a modern version of the three wise monkeys ('not seeing anything bad, not hearing anything bad, not saying anything bad' as a guideline for behaviour) and idealised doubles of Kimberly CLARK. Murals, some painted with lipstick and in the room in the back, an accumulation of photographs under black light recall their cathartic wanderings at night.
Between release and frustration, exacerbated femininity and dark mood, the whole installation reflects the three artists' questioning about their identity and image as women. The energetic and desinhibited shape of these interrogations also echoes the dynamic of a city, Rotterdam, from which one of the new trash punk icon, Elle BANDITA, will be playing live at the gallery on the opening night.
Iris van DONGEN was born in Tilburg (Netherlands) in 1975, Josepha de JONG in Oosterwalde (Netherlands) in 1977, and Ellemieke SCHOENMAKER in Balkburg (Netherlands) in 1969. They live and work in Rotterdam.
www.bugadacargnel.com