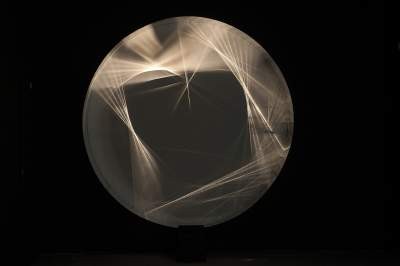 © Julio Le Parc
Continuel-lumière cylindre, 1967
Wood, plexiglas, motor, lightbulb
113.78 x 98.82 x 27.95 inches
The light beams of the Continuel-Lumière-Cylindre are projected on a circular metalized edge at intervals thanks to a system of rotary caches. The metalized edge reflects the beams on a neutral background where they intertwine and disappear into themselves. The composition undergoes continual transitions and the ever-changing image wreaks havoc on the eye, disorienting the eye until it gives itself over to the mysteries of the work. Or on the contrary, it looses itself in the work: indeed, the enhanced circular structure of the object and the ephemeral circulatory logic of the light beams may reveal, as is the case in the “Targets”, a new allusion to the ocular globe.
JULIO LE PARC
The Eye of the Cyclops
Works from 1959 to 1971
Curator: Matthieu POIRIER
9 September - 5 November, 2011

During the 1960s, Julio Le PARC (born in 1928 in Buenos Aires, lives and works in Cachan, France) was at the origin of numerous aesthetic practices that are of great importance today. The works from 1959 to 1971 gathered by the art historian Matthieu Poirier for our exhibition rely on dematerialization, perceptive haze, formal reduction, artificial lights, environments, the audience's implication, and varying levels of vision. These elements have become of crucial importance for several contemporary artists such as James TURRELL, Anthony McCALL, Dan GRAHAM, Carsten HÖLLER, Ann Veronica JANSSENS, Olafur ELIASSON, Anish KAPOOR, Jeppe HEIN or Philippe DECRAUZAT, just to name only a few.

Other works by LE PARC, shown this year at the MOCA in Los Angeles and at the Centre Pompidou-Metz, reveal a language that is at once minimalist and complex and in opposition with classical abstract compositions.

In 1972, after LE PARC has already become a well-respected artist with these artworks, Jacques LASSAIGNE, the director of the Museum of Modern Art of Paris, suggests a large retrospective exhibition of his works from the years 1959 to 1972. However, the ambiance remains anti-institutional and, after having weighed and explored the pros and cons of this show in a long text, Le Parc declares that he is 'incapable of making a decision'. He decides to flip a coin: heads he accepts, tails he refuses. On one fateful Saturday in April, the artist's young son tosses a coin into the air in front of witnesses at the museum. The coin lands tails up and the exhibition doesn't take place.

In the decades that follow, LE PARC's work takes another direction and it is only at the end of the 1990s that his work retrospectively gains new life, alongside with the revival of perceptual art. Let us imagine today — without making any presumptions regarding the curatorial intentions some forty years ago — that the coin lands heads up and that the cancelled show is now taking place at gallery BUGADA & CARGNEL.

(excerpt from the leaflet published on the occasion of the show)
www.bugadacargnel.com