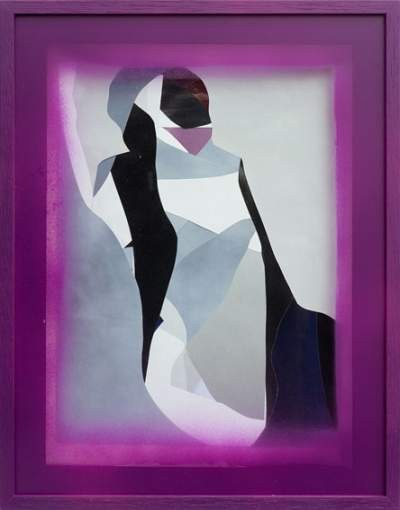 A major actor on the Italian art scene, both an artist and a musician, Nico VASCELLARI combines sculptural installations with sound performances. Inspired by punk and experimental music, spiritualism and nature, he maps spaces, energies and sounds.

For his first solo show in France, he shows an installation gathering collages (Untitled (Horizons)), slide projections (Horizons) and, as a central piece, a monumental monolith (I Hear a Shadow), the bronze cast of the detonated top of a marble mountain. During the opening the sculpture will be activated and played as a resonance chamber in a collaborative performance with iconic musician Stephen O'MALLEY.

Nico VASCELLARI sees his collages as as many studies on light, and more specifically twilight, following for their production a predeterminated rule : each collage is made from one magazine, in which the artist cuts each page to keep only the monochromatic areas, that generally correspond to the background of images. He then glues the pages, like as many sedimented landscapes, creating multi-layers and multi-colored abstract compositions from which silhouettes sometimes stand out.

The monolith is illuminated by three projectors, which project alternately 160 slides reproducing the collages. In a kaleidoscopic effect, light and colors shroud the sculpture in as many sunsets, and draw the mountains' shadow on the wall.

Nico VASELLARI was born in 1976 in Vittorio Veneto, Italy, where he lives and works. He has had numerous solo exhibitions including, in 2010, Macro (Rome), Marina Abramovic Institute (San Francisco) and Museion (Bolzano). His work has also been shown in many group exhibitions, amongst which at Pinchuck Art Centre (Kiev), Le Magazin (Grenoble), Tate Modern (London), Kunsthaus Graz, Julia Stoschek Foundation (Düsseldorf), Manifesta7 (Rovereto) and the 52nd Venice Biennale. In 2010, Nico VASELLARI was amongst the finalists for the Future Generation Pinchuk Art Prize and the Contemporary Art Society Prize (Great Britain).

Stephen O'Malley was born in 1974 in Seattle; he lives and works in Paris. A much revered musician, a producer and a composer reference, he conceptualized and participated in many experimental music projects.
www.bugadacargnel.com