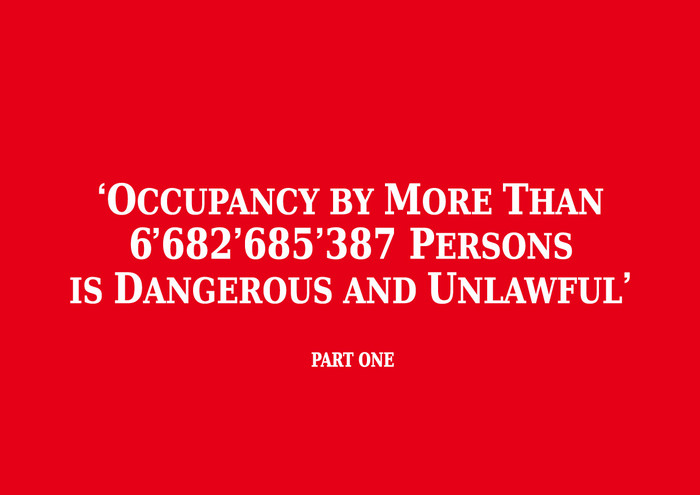 Under an ironically Malthusian title paraphrasing occupancy signs in public places in the US, Pierre BISMUTH has invited ten artists and writers to each collaborate on an artwork around a theme that is central in his practice, the notion of 'sabotage'.
Familiar with collaborations, in the visual arts field and beyond (amongst other things, he wrote the synopsis of the film Eternal Sunshine of the Spotless Mind, which made him the only visual artist to ever win an Acadamy Award, for Best Original Screenplay in 2005, along with director Michel GONDRY and scenarist Charlie KAUFMAN), Pierre BISMUTH seizes the opportunity to blur the classical notion of authorship.
Turning away from the solitary monologue of the artist, the exhibition is both a repeated challenge of creation with four hands and two brains, and the prototype of an original curatorial experience.

In Shallow, Bismuth’s work on the drifting of meaning in language, as expressed in his Synonym series, crosses Stefan BRÜGGEMANN's conceptual nihilism. The word 'SHALLOW' is superimposed over neon tubing which reads 'NO CONTENT'. The synonyms, however, are opposed by their formal presentation, the pristine neon piece being ‘vandalized’ by a vulgar graffiti letters.
In their second piece, Two Letters, an 'N' and an 'O' in neon tubing have been arranged in such a way that they may be read as either 'NO' or 'ON'.

Gardar EIDE EINARSSON often makes use of visual imagery borrowed from underground subcultures including the criminal world and left-wing militias. Using a primarily black-and-white palette, the work has stylish punk sheen that evokes rebellion through its cold, hard-edged rejection of sentiment. For their collaboration Antisocial, EIDE EINARSSON's produced a diptych of two identical paintings of geometrical figures based on criminal tattoos; one of them was then perforated by Bismuth, in a gesture very typical of him; the holes cut through the figures reveal the canvas' underlying wooden support.

One Spray Can Not For Public Use , with Matias FALDBAKKEN, is a self-defeating piece of writing, where the act of inscription entails its own effacement. A text is written with a spray paint can, with the proviso that the can be used until it is empty, thus obliterating the original phrase in an illegible blob of pigment. Bismuth chose the phrase 'Not For Public Use' as an ironic comment on Faldbakken’s form, which is both eminently public (visible) and indecipherable (obscured).

BISMUTH and Claire FONTAINE's joint venture Exhibitions consists of a series of videos in which curators mime an artwork of their choice. The aim of the project is to render a certain form of protagonist presence to the body of the curator. By using the physical potential of communication to describe a plastic form, language becomes secondary and another type of wordless comprehension is instituted and shared with the spectator.

For his collaboration between BISMUTH and Cyprien GAILLARD, the latter established the rule of the game, by giving BISMUTH a series of works in which he should intervene. The works are four old black and white postcards that have been, in a manner typical of GAILLARD's corrective approach of landscape, partially obscured by ripped pieces of white paper, which gives them a conceptual link with BISMUTH's Collages for Men. In an openly provocative manner, BISMUTH has signed his name on the white spaces — a game of appropriation and a play on the function of proper names equally emblematic of Bismuth’s practice.

Applying to Elisaveta KONSOLOVA's monochrome series of Corrective Paintings one of BISMUTH's concepts, their Potemkin Landscape refers to the story of Potemkin Villages, fake settlements supposedly erected at the direction of Russian minister Grigori Aleksandrovich POTEMKIN to fool Empress Catherine II during her visit to Crimea in 1787. According to this story, POTEMKIN, who led the Crimean military campaign, had hollow facades of villages constructed along the desolate banks of the Dnieper River in order to impress the monarch and her travel party with the value of her new conquests, thus enhancing his standing in the empress's eyes. KONSOLOVA and BISMUTH's work ironically reverses the principle of the Potemkin Village for the era of late capitalism. The 'corrective painting' is meant as a screen to hide the eyesores of capitalist development and return the frenzy of unsightly building projects and garish touristic spectacles back to the serenity of nature.

BISMUTH's collaboration with Thomas LÉLU (Untitled) is a work composed of the superimposition of two images of well-known artworks. This chaotic 'doubled' vision of art mirrors the disorientation of spectators in an accelerated world where there is no longer any stable criteria of evaluation. At the same time, the crossing of two familiar iconographies sabotages their intended effects and produces accidental, unexpected resonances.

Jonathan MONK and BISMUTH, who have collaborated on several occasions, produced a play of mirror reflections: a pair of mutually referring paintings, almost identical, reading 'This painting should ideally be hung to the right of a Pierre BISMUTH' and 'This painting should ideally be hung to the left of a Jonathan MONK'. Having been painted by a third person, the literal instructions of the works are short-circuited, neither painting being attached to the artist via a physical act. What remains is a logical paradox, in which artistic activity is transformed — along the lines of the conceptual tradition from DUCHAMP to KOSUTH – into a game of pointing.
The rule of this meta-artistic work is that it is always linked to another artwork, thus subverting the ideal of artistic autonomy: dependency is made a necessity.
MONK and BISMUTH's Object Used to Fill in the Space makes use of any leftover material to make a piece according to the needs of the exhibition: an artistic stopgap to ensure that there are no empty spots in the show.

Aaron SCHUSTER is a brilliant writer and philosopher, who has collaborated in the past on a number of artistic projects. SCHUSTER and BISMUTH's Famous starts from Andy WARHOL's notorious phrase, 'In the future everyone will be famous for fifteen minutes'. Already in WARHOL's time the line was an instant cliché, too true to be true, and so the artist subjected it to a number of permutations: 'In the future fifteen people will be famous' or 'In fifteen minutes everybody will be famous.' SCHUSTER has created a new variation, transforming the phrase into a tautology about time and a comment on the accelerated pace of contemporary history: 'In fifteen minutes everyone will be in the future.' BISMUTH's animated setting gives the static statement a sense of duration implied in the title, and provides a minimal video version of WARHOL's aesthetic. The video's shifting color scheme translates WARHOL's spatial seriality put back into the medium of time – the time spent watching which brings the spectator closer to the future.