Were all stars to disappear or die… 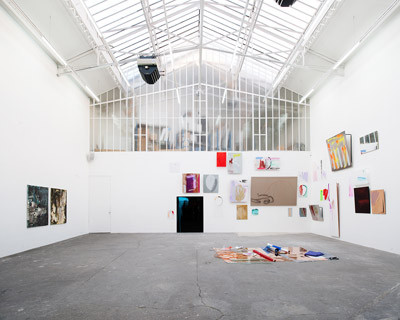 'Were all stars to disappear or die I should learn to look at an empty sky and feel its total dark sublime' is a sentence from the poem The More Loving One (1957) by Wystan Hugh AUDEN, that major abstract painter and theoretician Ad REINHARDT (1913-1967) quoted to define his artistic approach, especially in his iconic series of black monochromes Ultimate Paintings. Inspired by that sentence and its posterity, Were all stars to disappear or die... is the first chapter of a two-part exhibition, that presents different conceptual approaches to abstract art, here through the works of Nina BEIER, Étienne CHAMBAUD, Peggy FRANCK, Alex HUBBARD, Pamela ROSENKRANZ and Ryan SULLIVAN.

Peggy FRANCK (born in 1978 in Zevenaar, Netherlands, lives and works in Amsterdam and Berlin) creates site-specific installations from paintings and materials such as plexiglass, copper plates or papers. Drawing for a store of thought (2011) consists in colored abstract shapes painted on different backup material. The artist thus transforms the two-dimensionality of painting into an environment that the look and body together apprehend.

Pamela Rosenkranz (born in 1979 in Bern, lives and works in Zurich) questions the historical relations between art and life. Avoid Contact (Healthy Flesh) (2011) is part of a series of works made of Spandex, synthetic fabric commonly used for sportswear. Pinned to the wall, this material covered by forms reminiscent of Yves Klein's Anthropométries—fabric canvases on which women bodies coated with paint left their print—also invokes a past human intervention.

Ryan Sullivan (born in 1983 in New York City, lives and works in New York City) creates large canvases by starting from observation of everyday examples of abstraction (the traces of rain on a car window, the network of veins on a block of marble etc.) and of the behavior of matter. The diptych composed by May 13, 2011—June 4, 2011 (2011) and July 24, 2011—September 28, 2011 (2011) carries in its title, like most of his works, the dates of beginning and end of the creation process, adding temporal and performative qualities to the paintings.

Alex Hubbard (born in 1975 in Toledo, United-States, lives and works in New York City) approaches performative arts through an open relation to the visual arts (painting, sculpture, video). Part of his many filmed performances, Make Your Movie (2010) synchronizes the creation process, the work and its recording. While revealing the secret life of things, their hidden energy, Alex HUBBARD identifies the artist's place by defining his field of action.

Étienne CHAMBAUD (born in 1980 in Mulhouse, lives and works in Paris) carries out a persistent exploration on the nature of an artwork: its relation to other works and thus other artists, its contexts and the way works of art are used, charged with meaning or endowed with a particular narrative. Created with Nina BEIER (born in 1975 in Aarhus, Denmark, lives and works in Berlin), the different Certificates (2009-20_) hold the program of works to be created within the framework of the two artists' collaboration. Their contract value, binding them both to the future work's collector, doubles on a legal level the symbolic agreement that dedicates an object into a work of art.
www.bugadacargnel.com