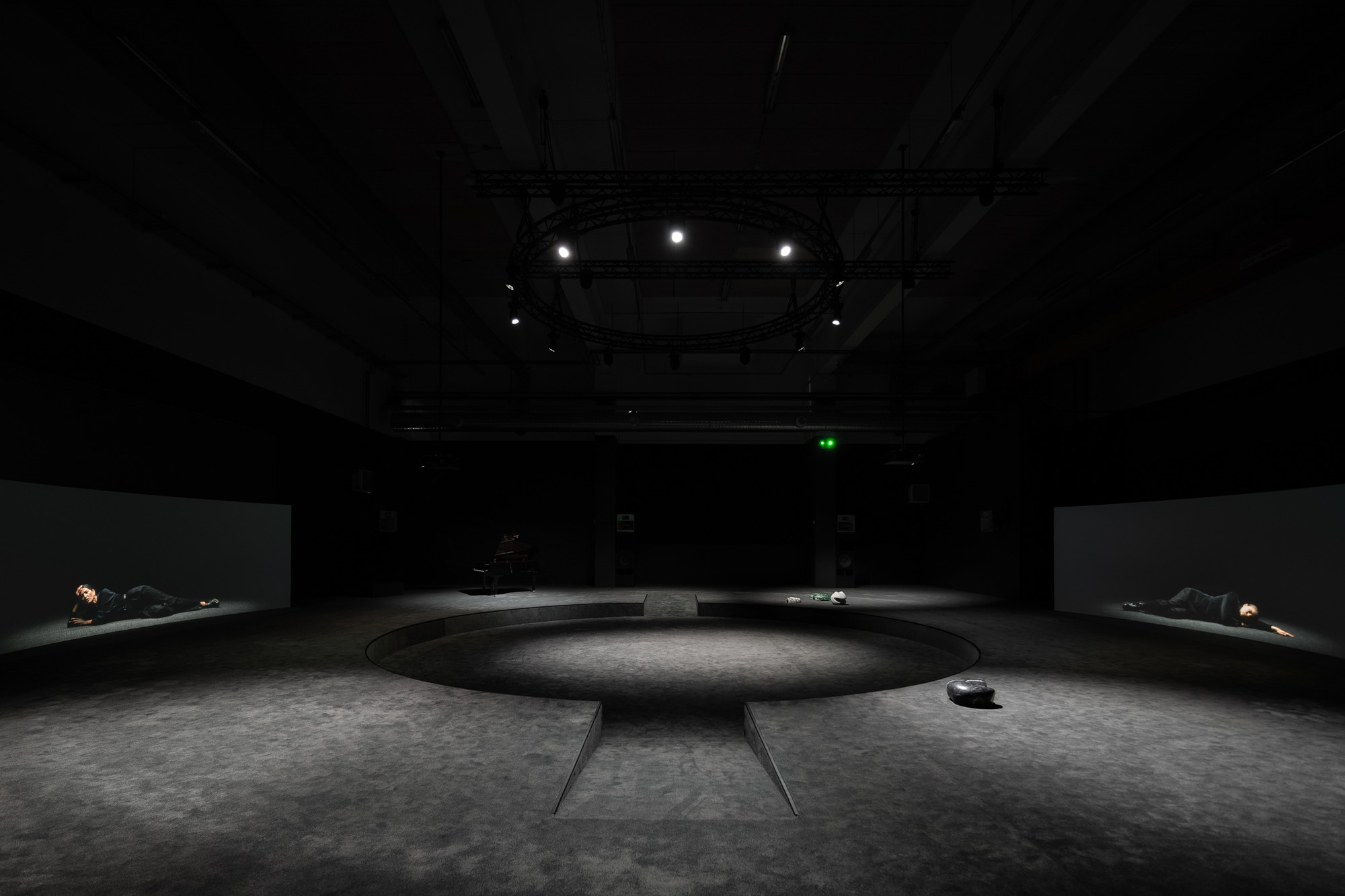 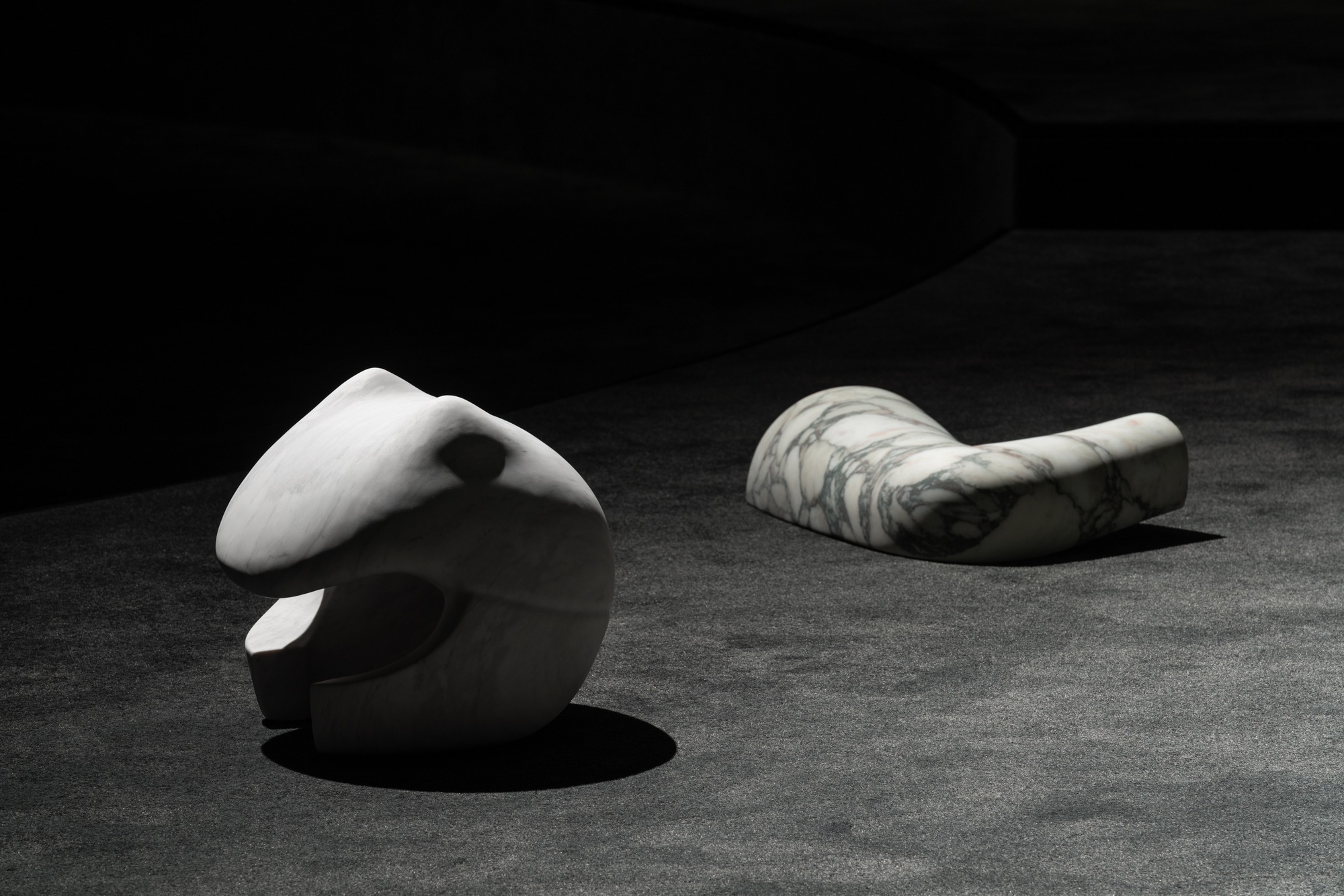 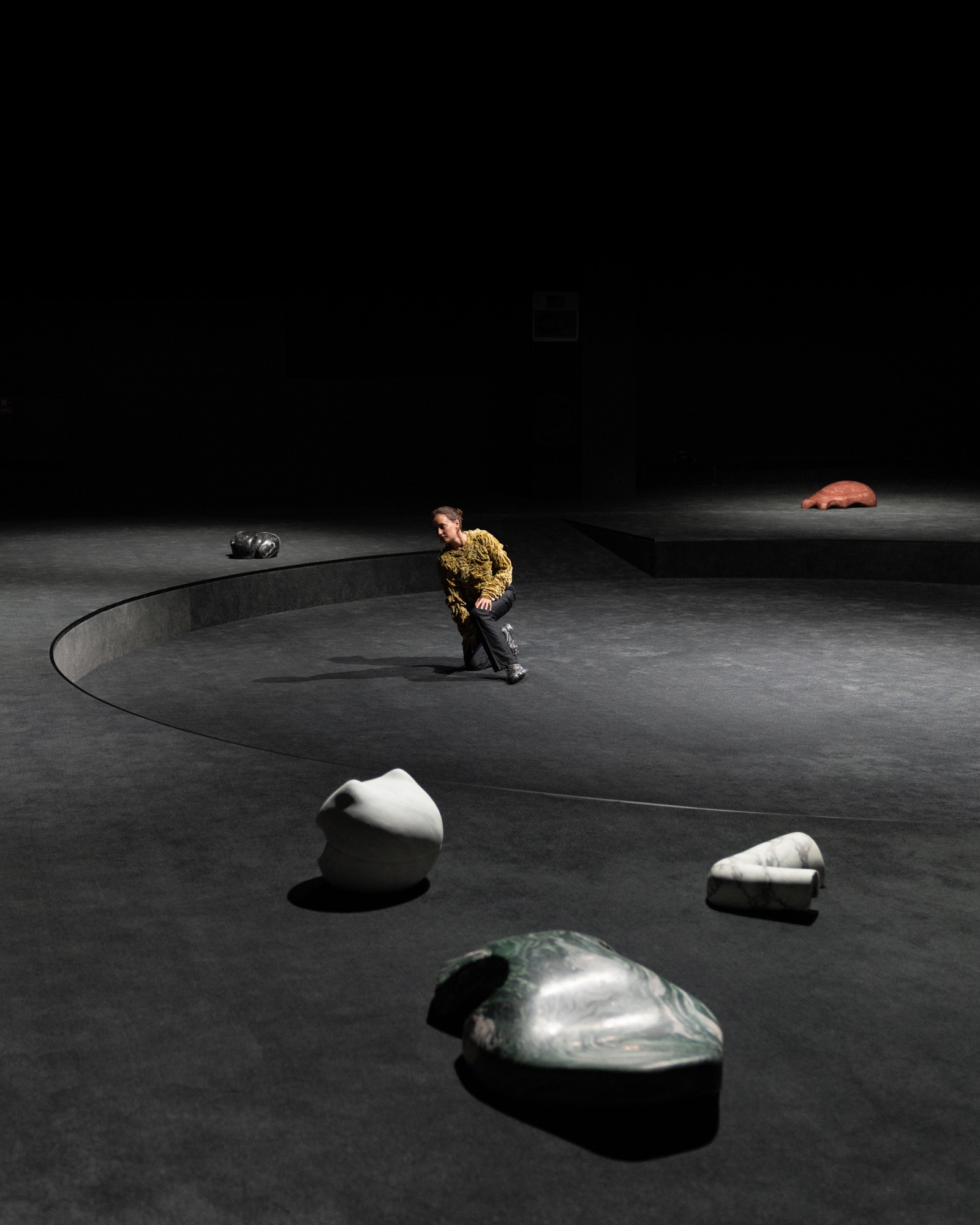 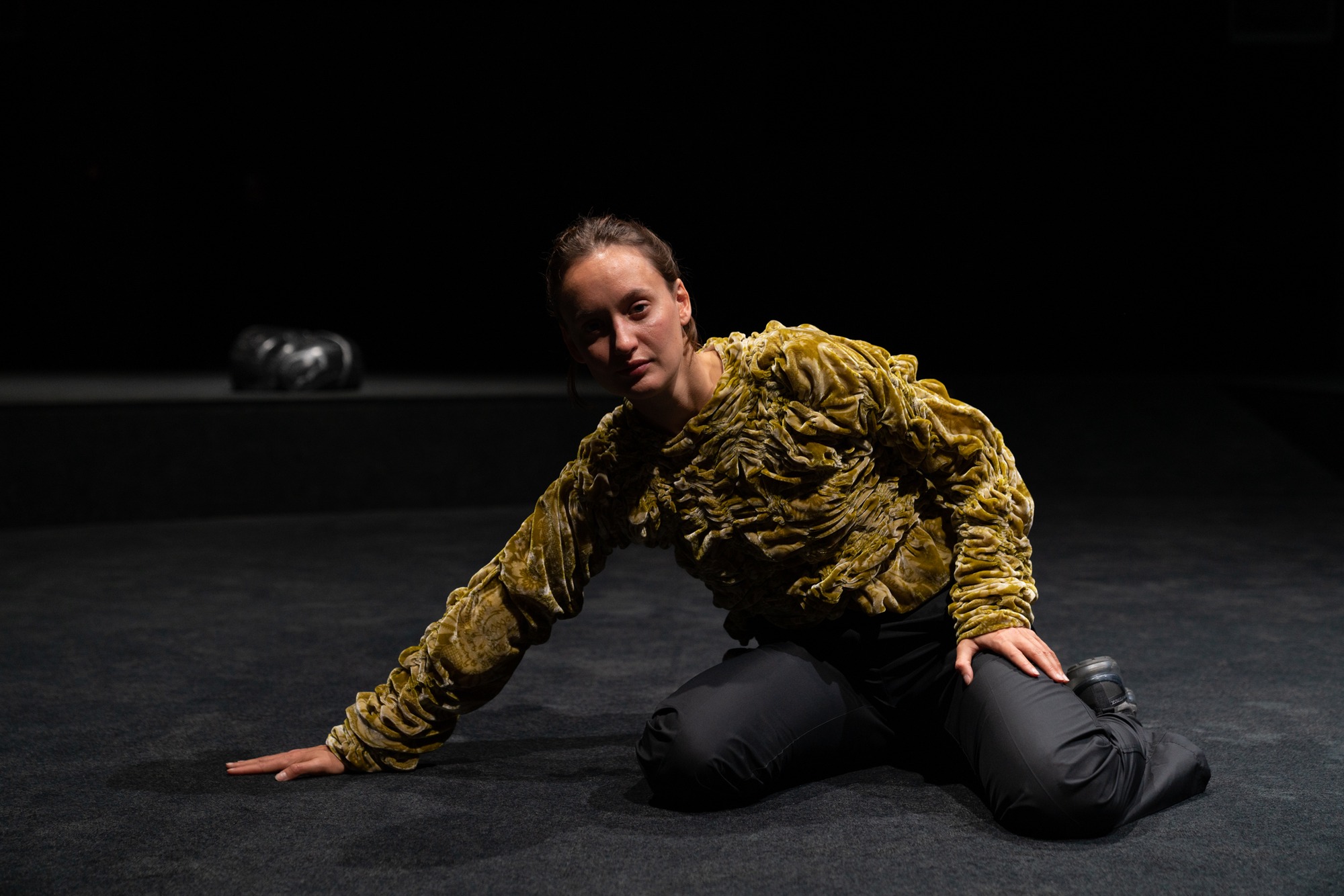 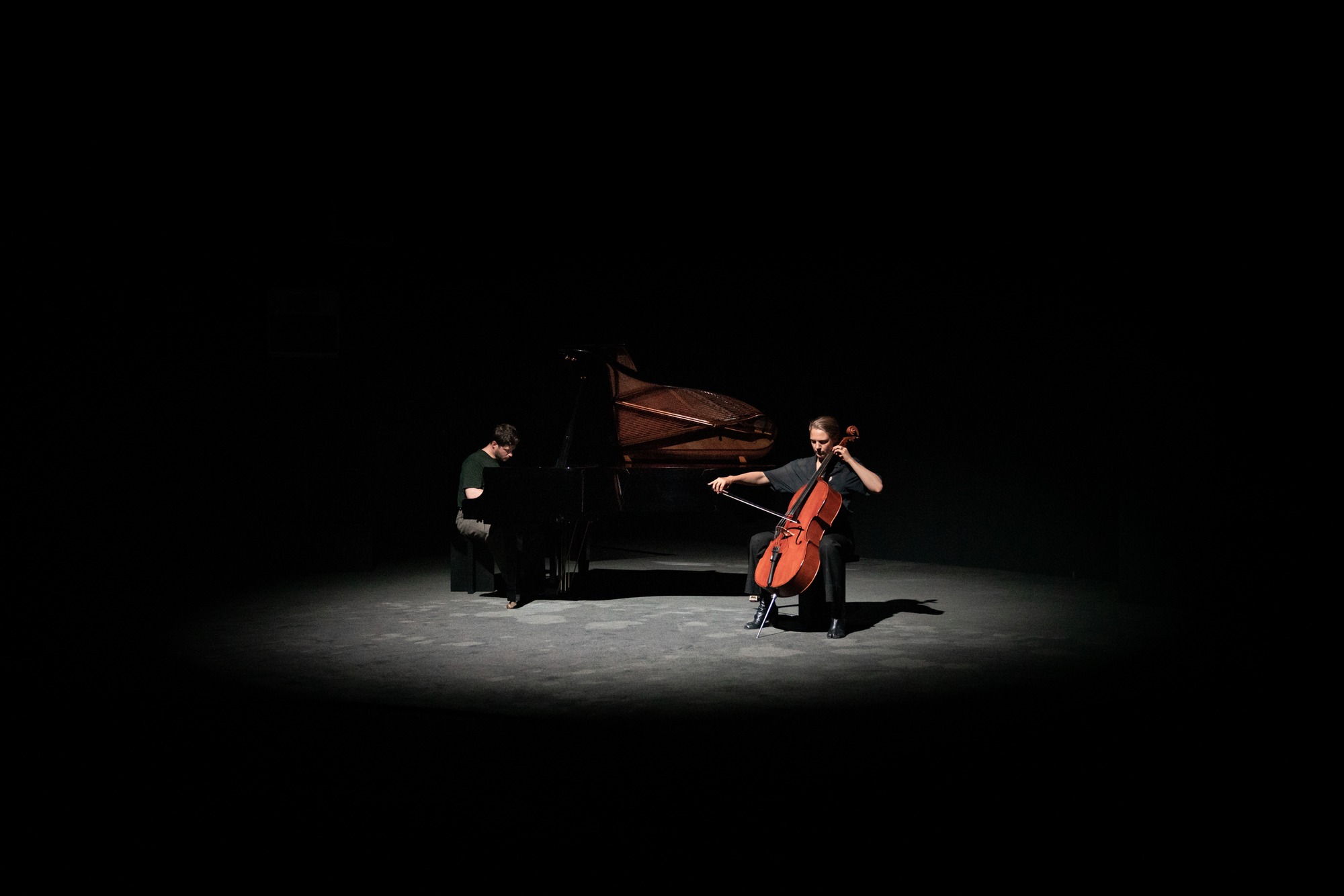 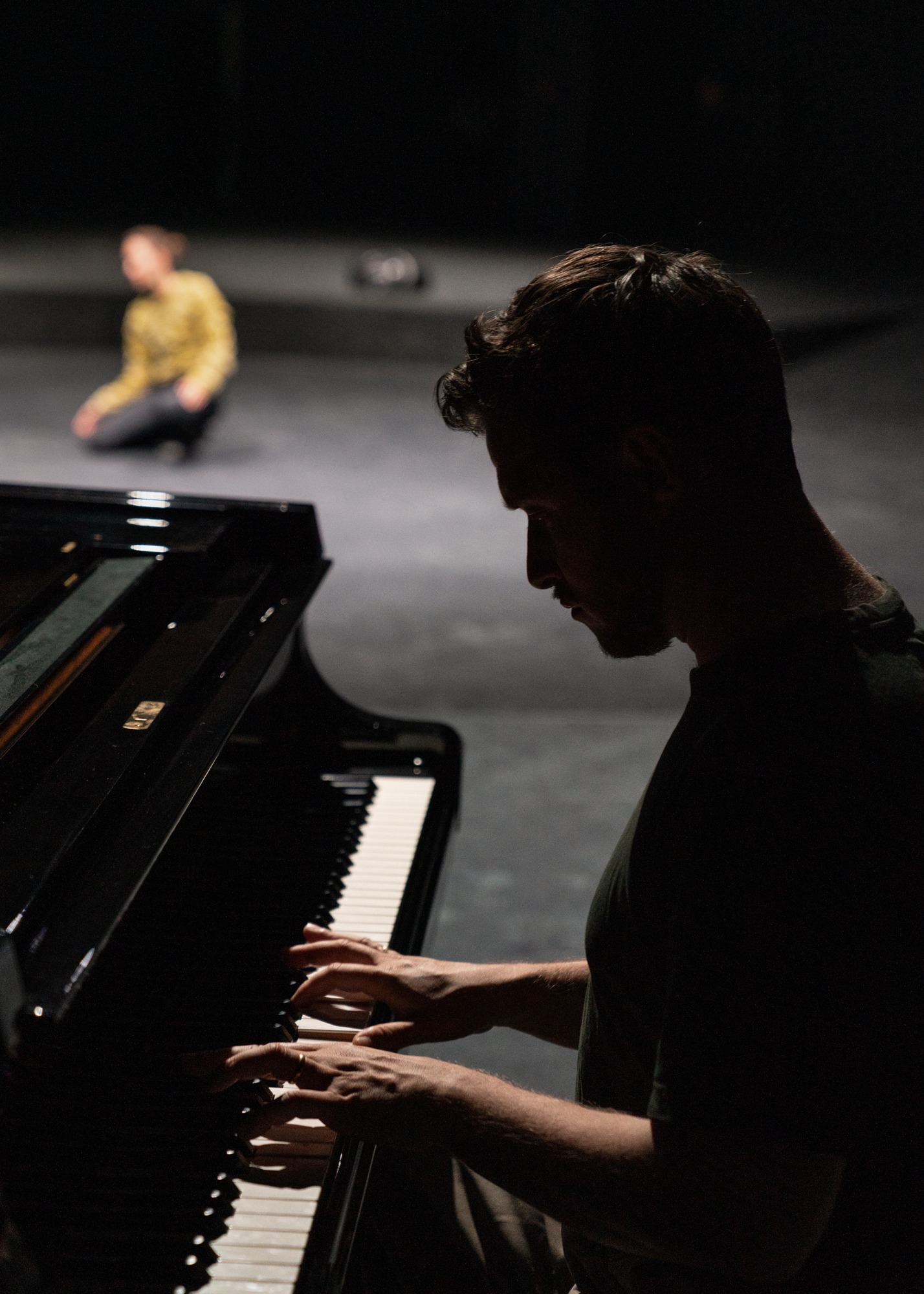 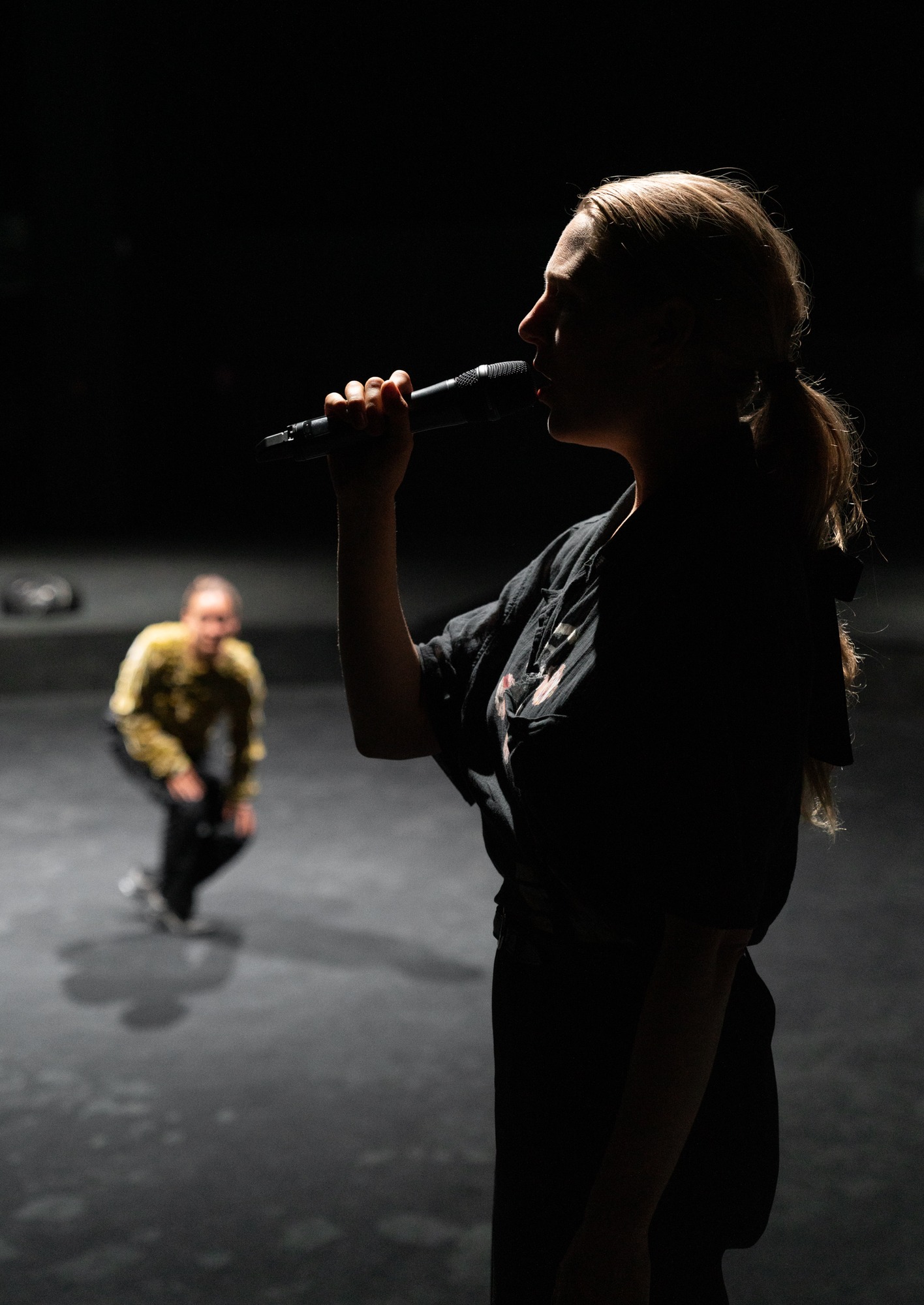 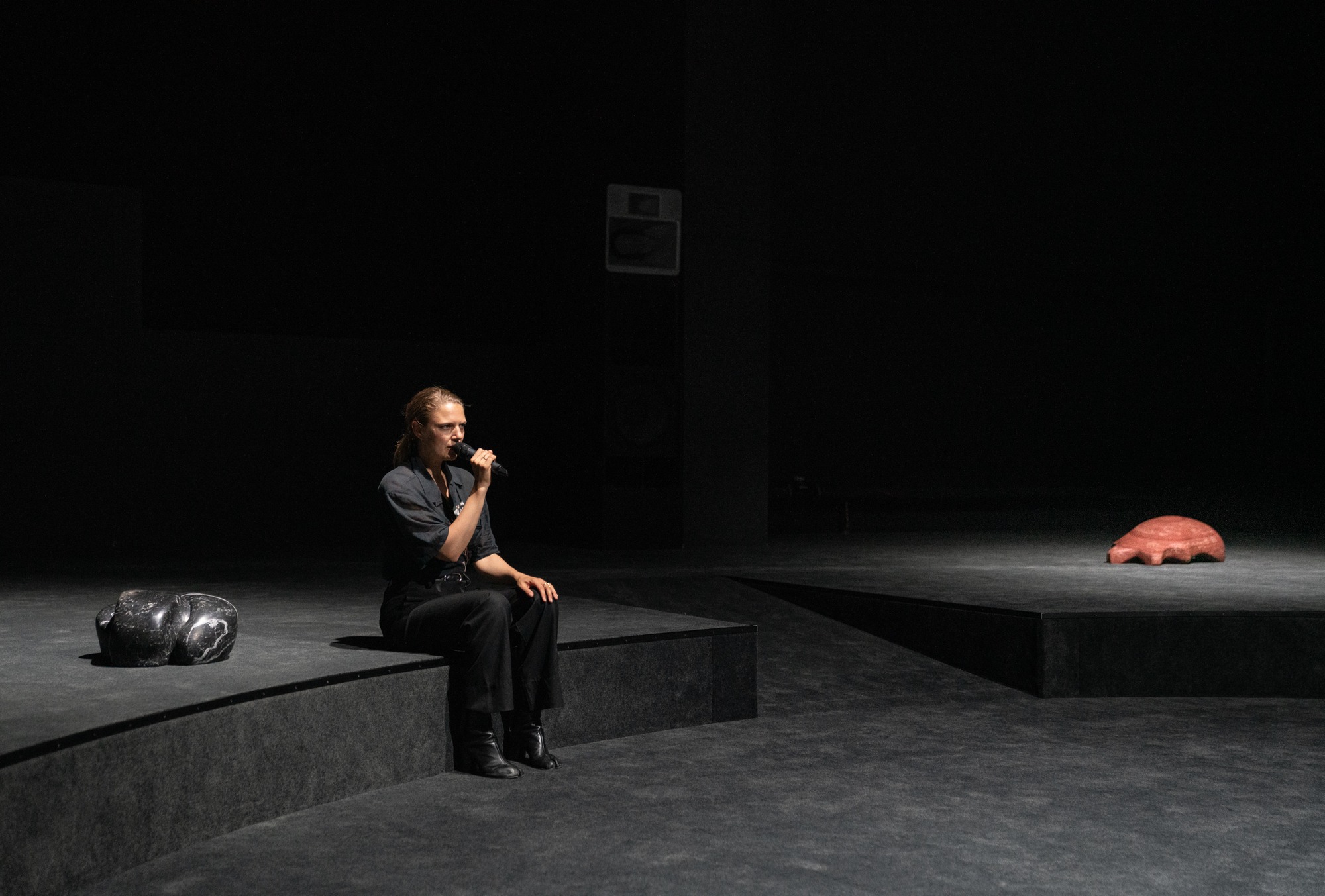 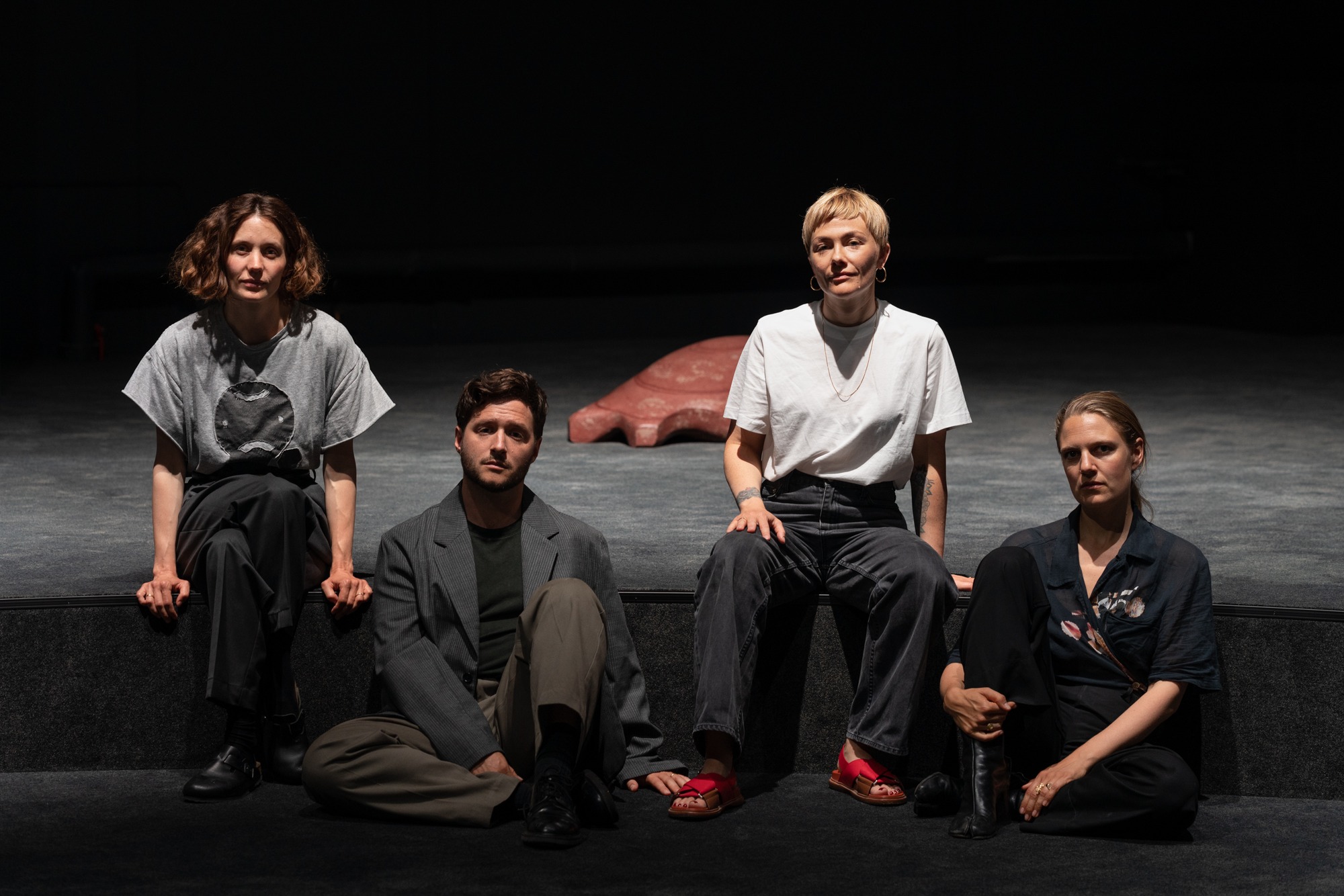 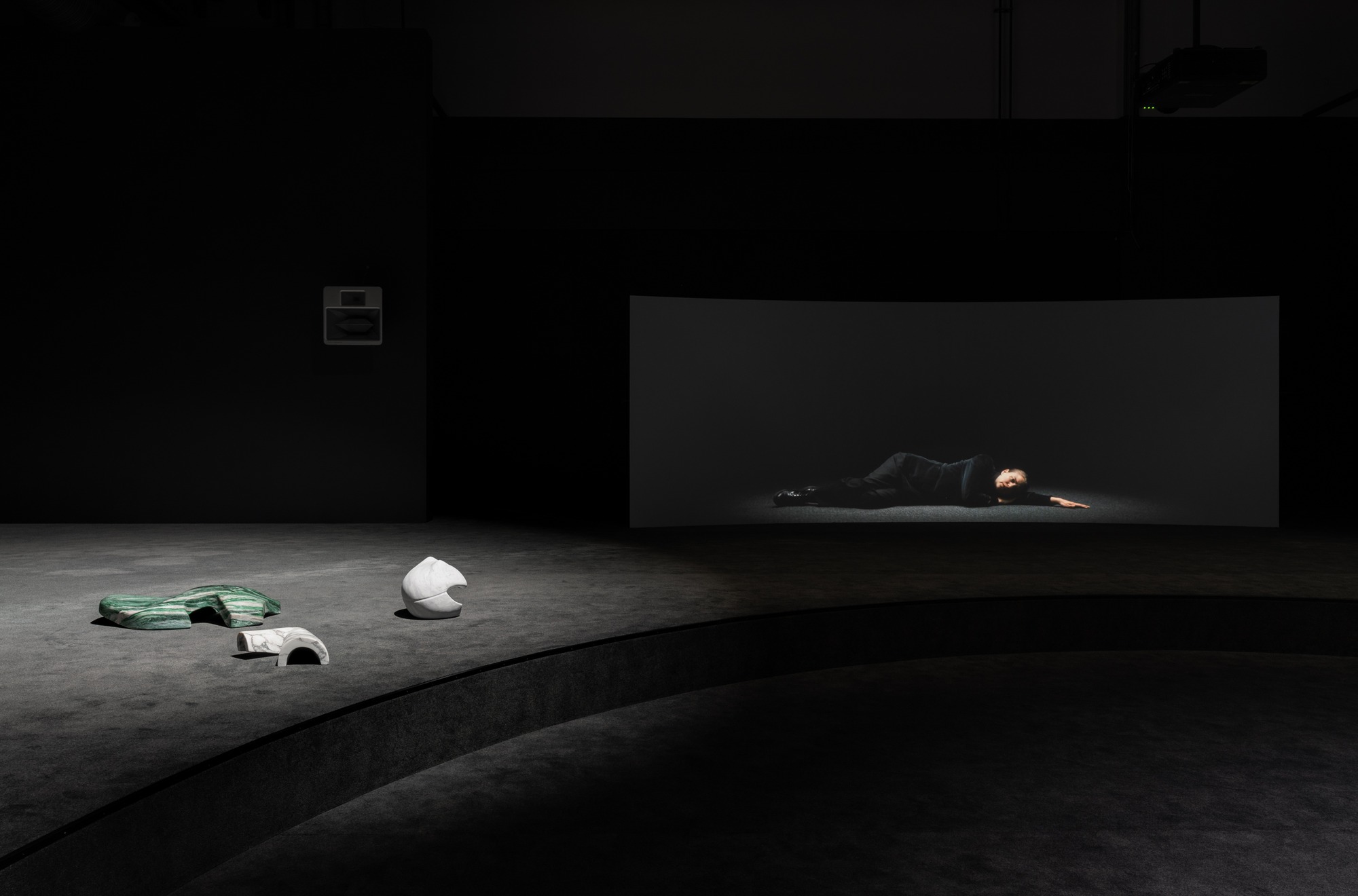 Celeste marks the meeting of the four distinct practices of Cæcilie Trier, August Rosenbaum, Lea Guldditte Hestelund and Ea Verdoner. The exhibition comprises sound, sculpture, video, fragrance and performance, which merge within the exhibition space as an immersive installation.

An ambient soundtrack triggers vibrations within the floor, which guide the audience through a course of stones, vocals and piano, while an ambiguous fragrance lingers in the air. Stone sculptures lay on the soft ground, centred around a circular crater. They appear formerly connected, like a torso torn-apart, while at the same time, as selfcontained individual parts, different entities from an unknown place. Evocative of a human shield or animal shell for bodily protection, they recall the ability to carry and be carried. In various ways, they evoke protection, embrace, and self-defence.

Two films are projected simultaneously onto opposing curved walls. Two human figures are discernible, lying motionlessly, waiting. Their bodies and gazes turn to face each other in an attempt at uniting their voices in a prolonged, mirrored duet. In a song based on the poem Orta or One Dancing by Gertrude Stein, their voices fill the space between them, conveying the story of a person, a daughter, a dancer, a lover, a mother; an existence undergoing constant change. The installation draws the eye to a horizontal perspective as sculptures and bodies presume prostrate positions on the floor. Celeste insists on its own time and perspective, emphasising individual interconnectedness to others; things and beings - via tempo, position, scale and accessibility.

Working between performance and installation the artists use a variety of materials, such as stone, voice, sound and movement, creating an extension in time and a sense of transience. Celeste is a slow work in several layers, changing and repeating itself over time. At a time when collectivity and mobility have ground to a halt, Celeste makes us aware of our existential vulnerability and the essential importance of community.

The installation unfolds in a loop lasting thirty minutes

Performances
During the duration of the exhibition, a series of performances will expand the exhibition's exploration of time and presence. Here, the artists will animate the space along with a solo dancer. These performances constitute a central point of tension where the installation is transformed into a cohesive circuit of relations between human beings and other presences, between the audience and a soloist, culminating in a concert by Trier and Rosenbaum.

Additional performances in August and September will be announced. Watch the Copenhagen Contemporary website for updates.

August Rosenbaum (b.1987) is a pianist and composer. His latest album, Celeste, is released on Posh Isolation with CTM. As a composer for film, art, and theatre, Rosenbaum has composed works for the Royal Danish Theatre, Palais de Tokyo, France, Metropolitan Museum of Art and BAM (Brooklyn Academy of Music) US and SMK, DK. As a songwriter, Rosenbaum has worked with artists including Kim Gordon, Coco O., Kendrick Lamar, Robin Hannibal, Zeena Parkins, and Kindness.

Cæcilie Trier (b.1982) is a musician and composer living in Copenhagen. Trier releases solo material under the name of CTM; her latest album, Celeste, is released on Posh Isolation with August Rosenbaum. Trier is also involved in an array of musical and cross-art collaborations.

Ea Verdoner (b.1985) is a modern dancer, film director, and visual artist educated at the Danish National School of Performing Arts, the International Center of Photography in New York, and Roskilde University, Denmark. Verdoner works interdisciplinary with film, photography, and choreography in works that often cross art forms.