Do Not Touch The Worms 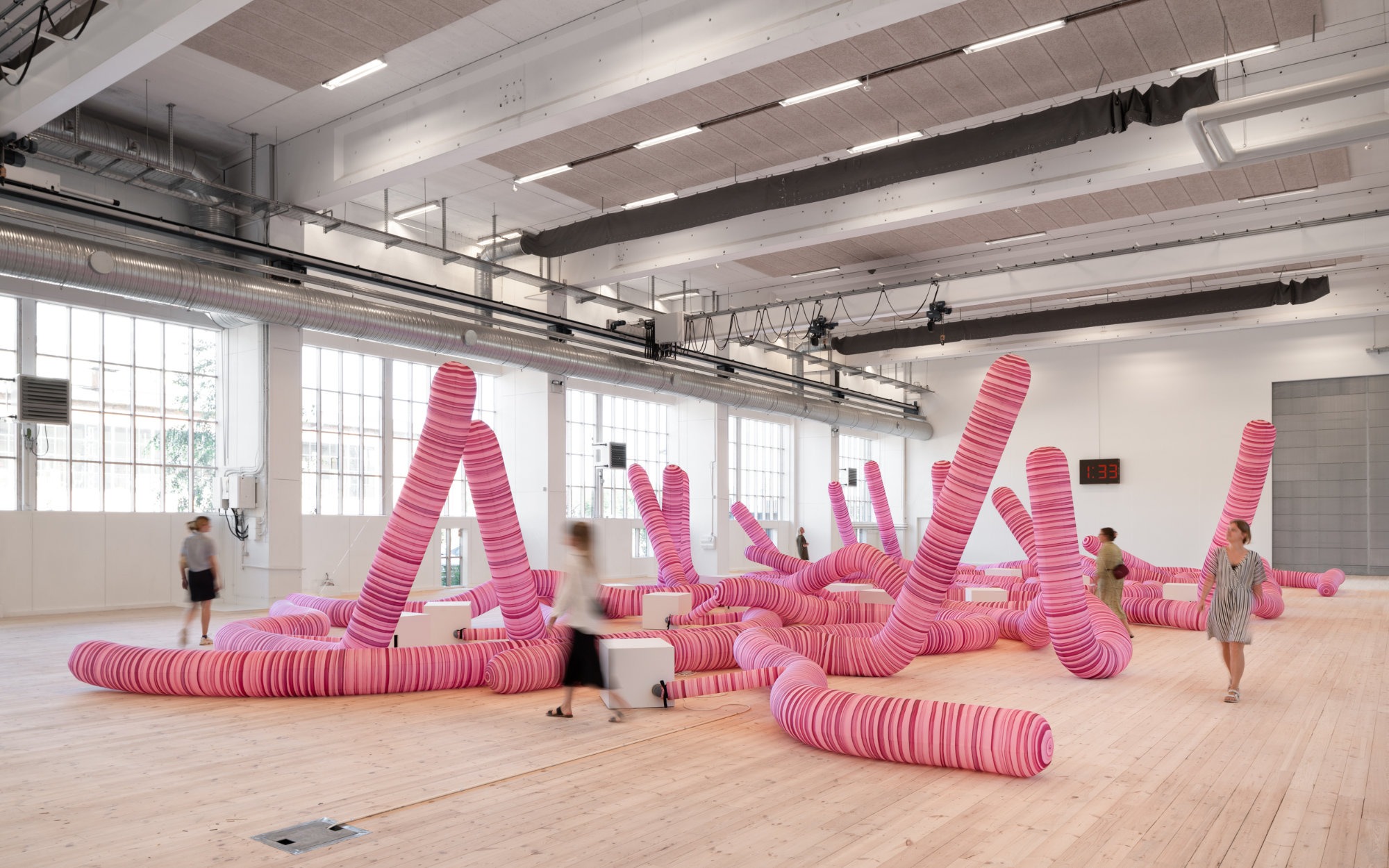 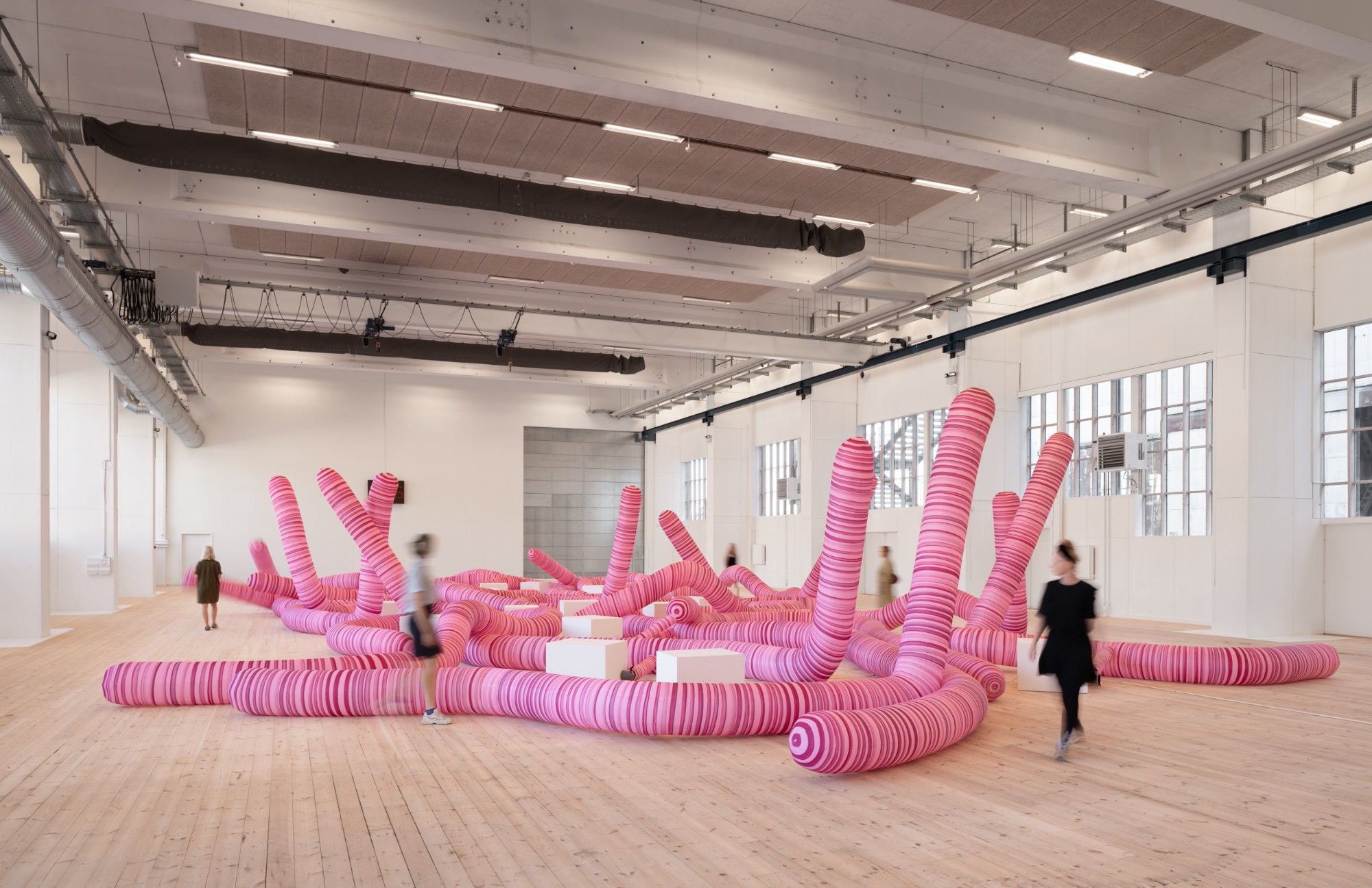 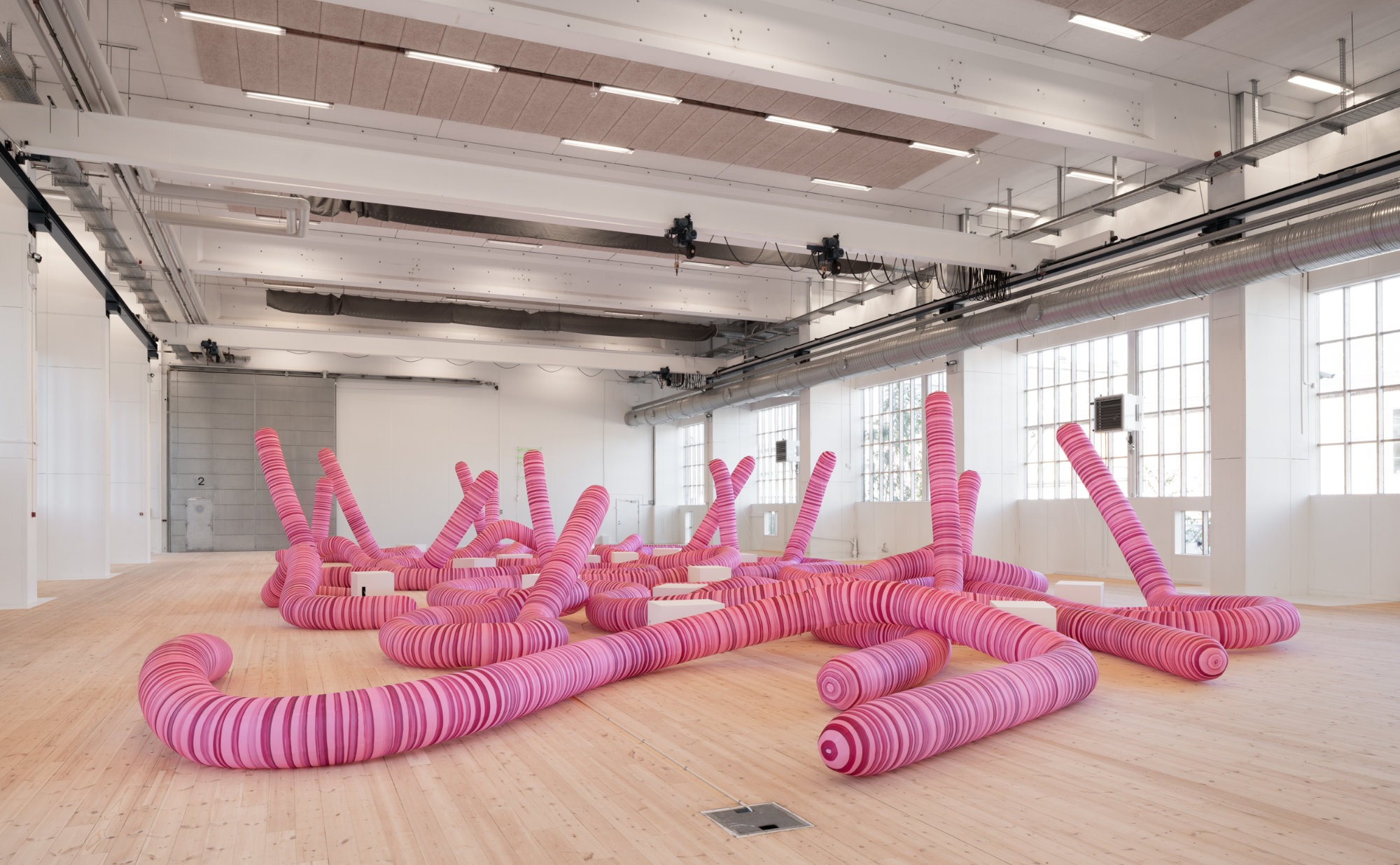 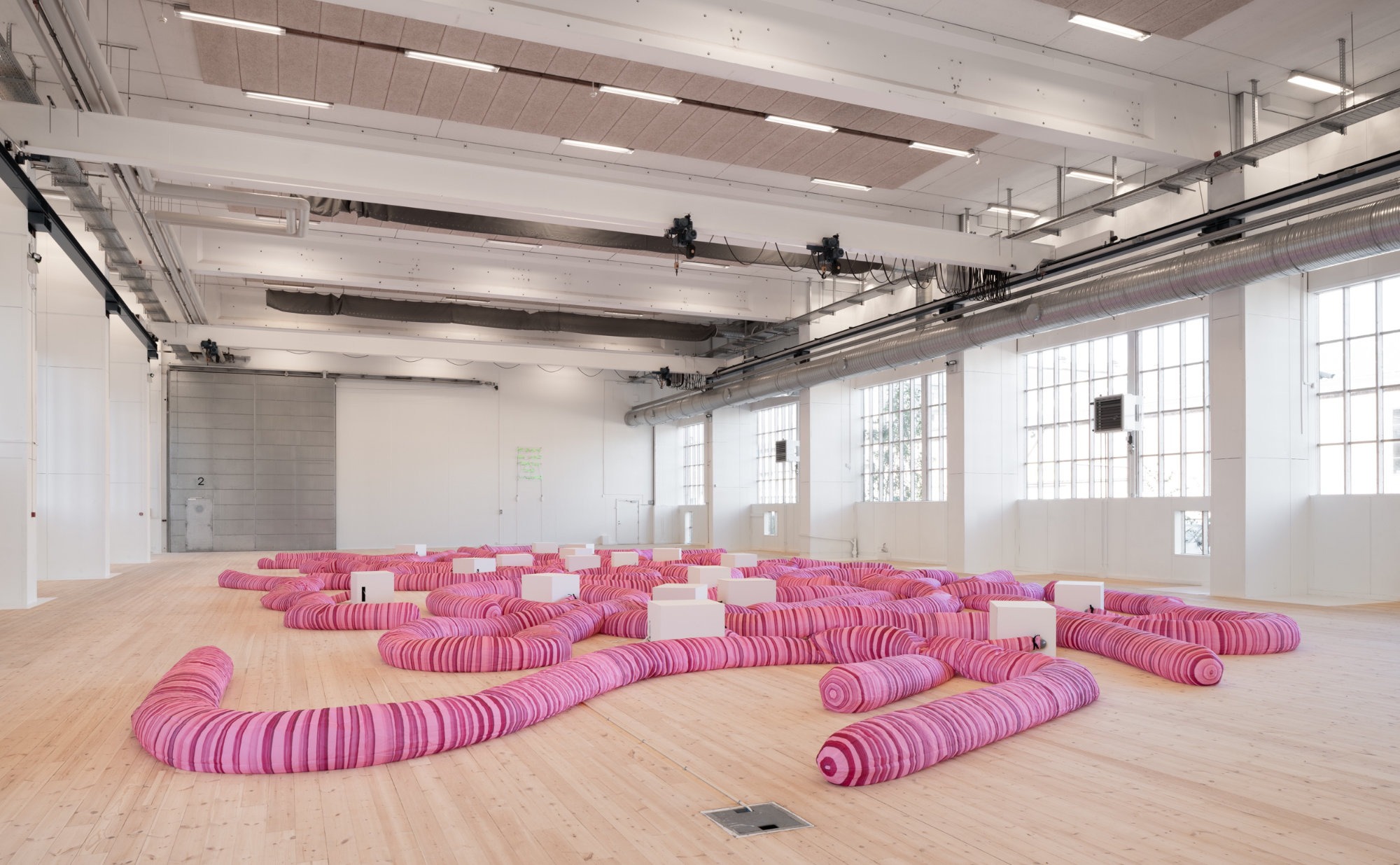 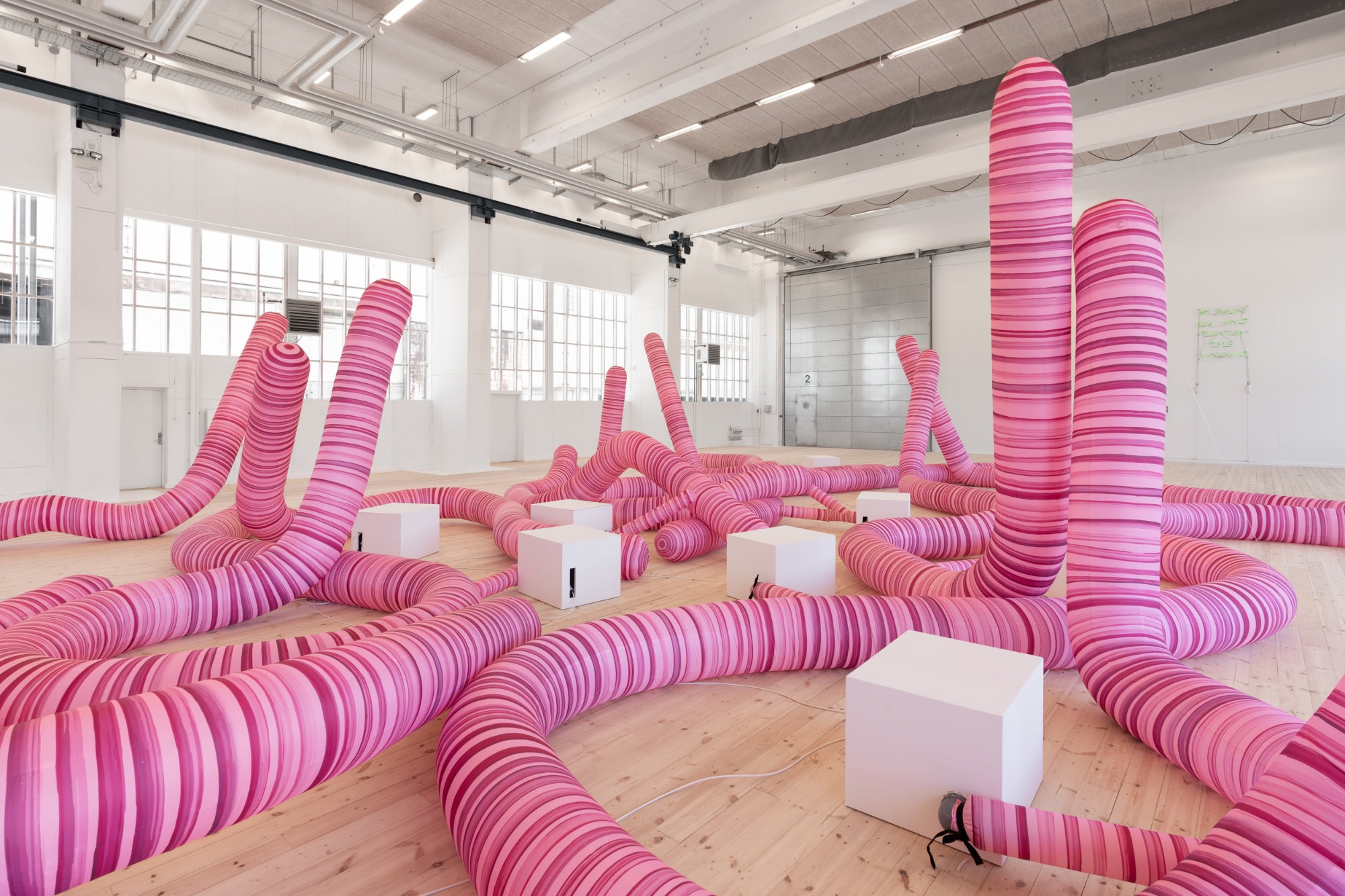 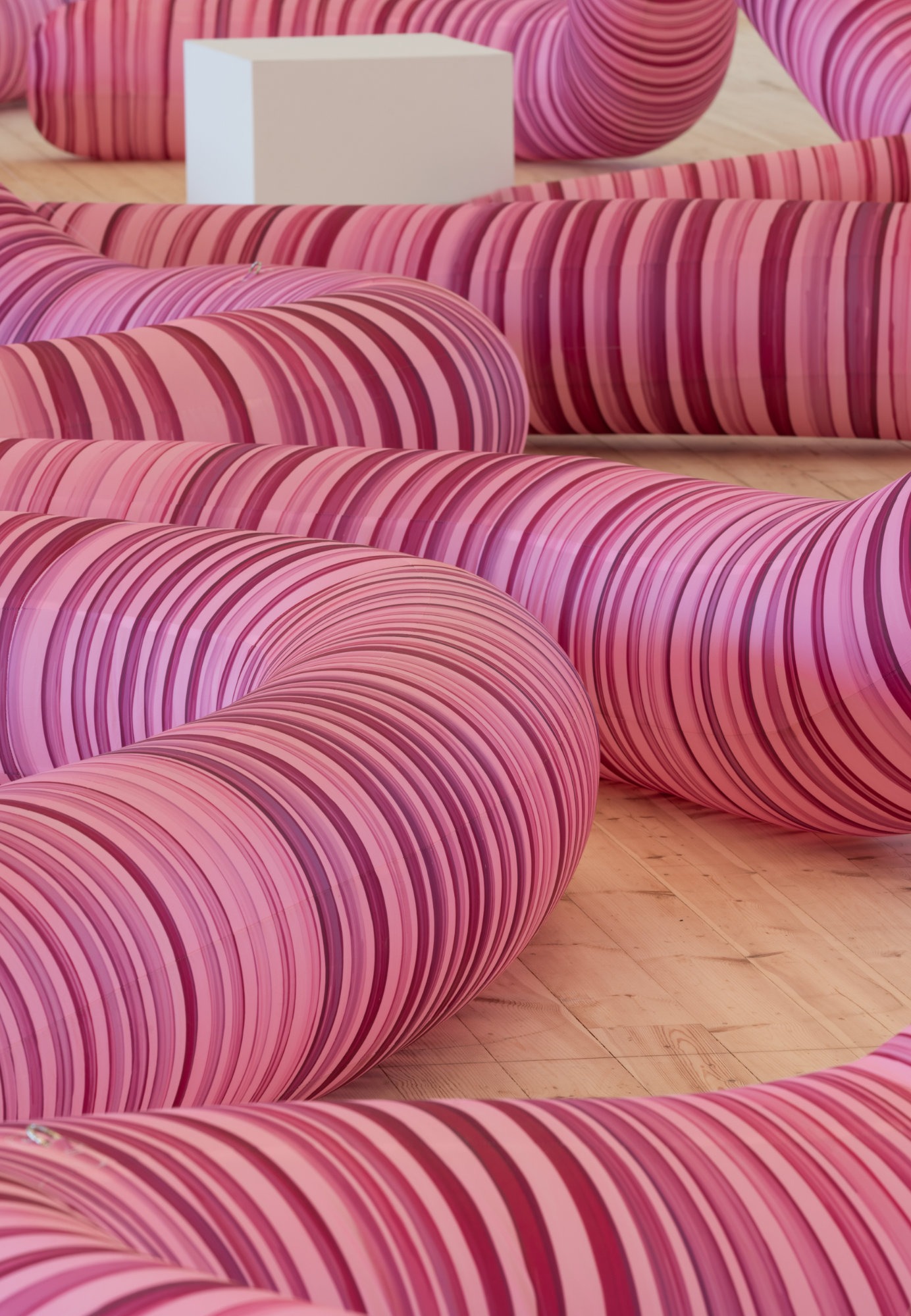 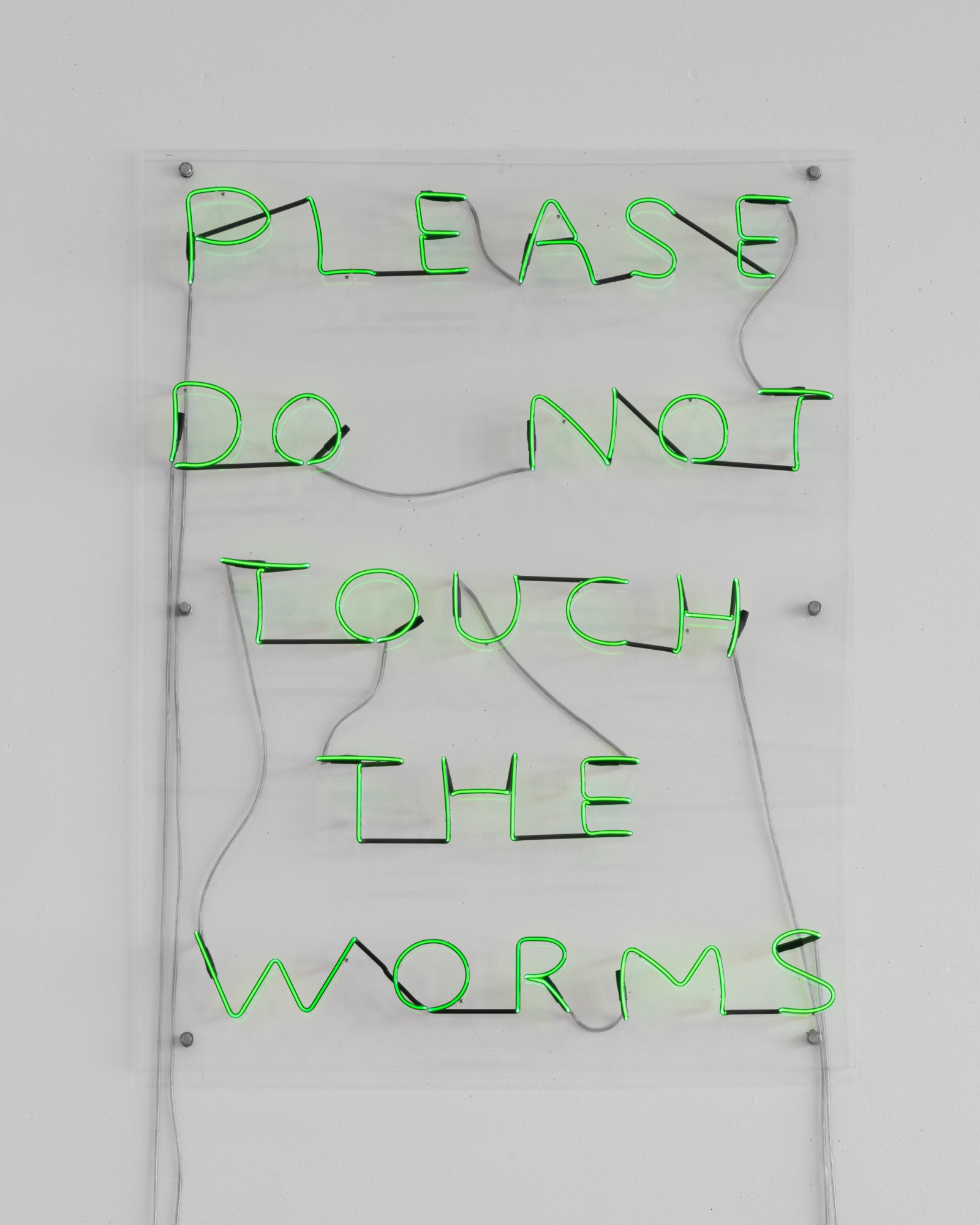 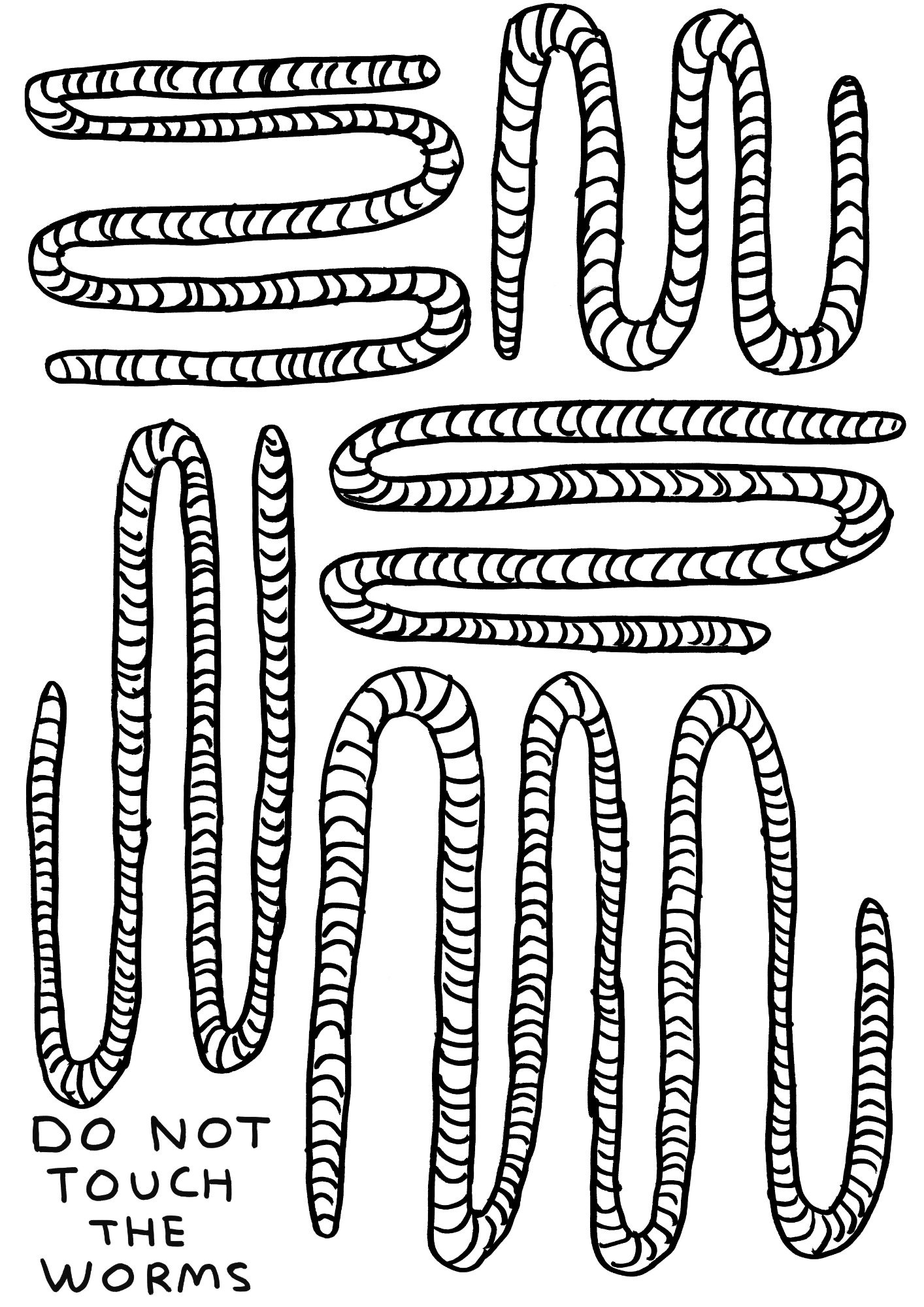 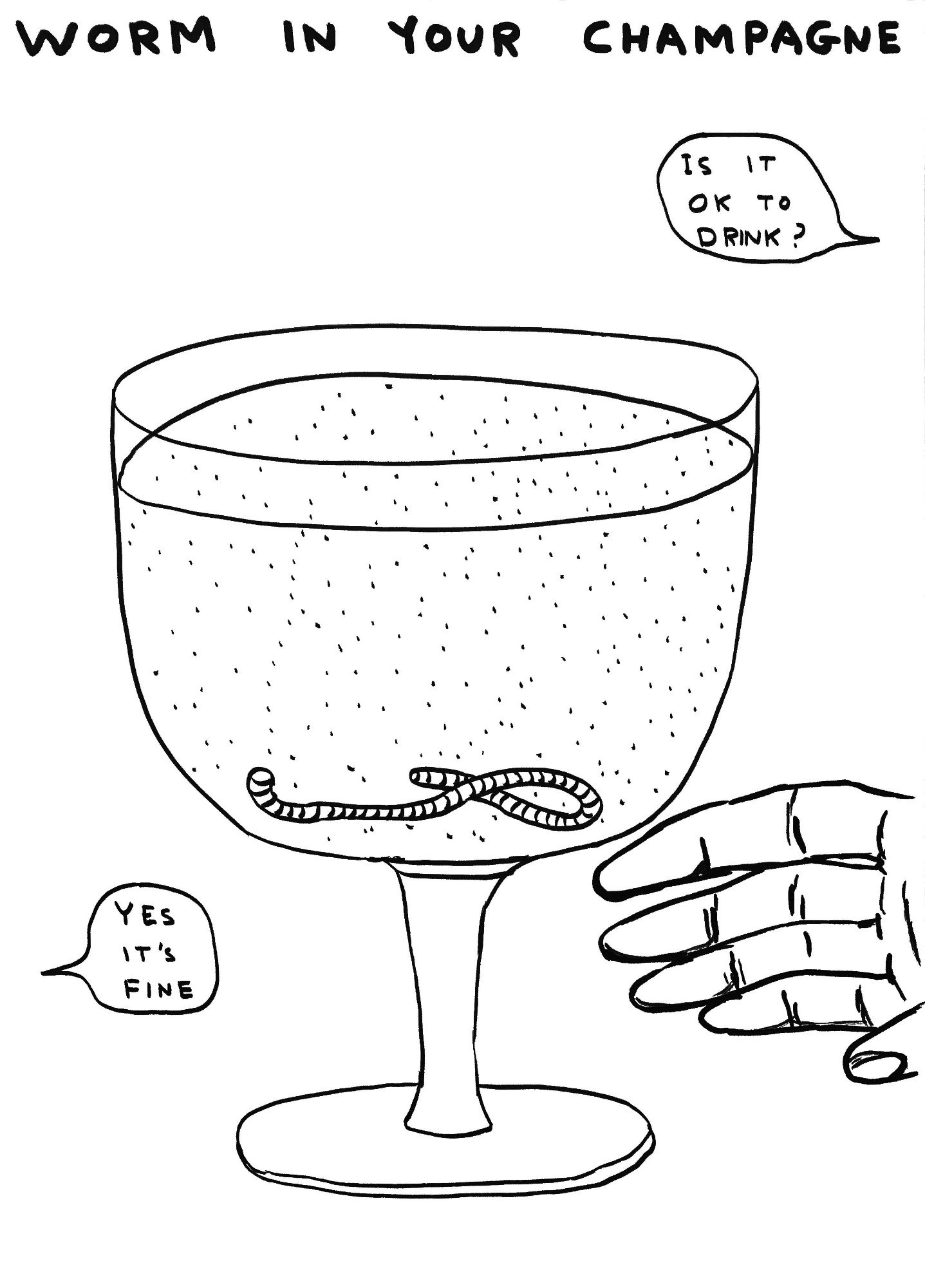 David Shrigley, Worms In Your Champagne (2020) 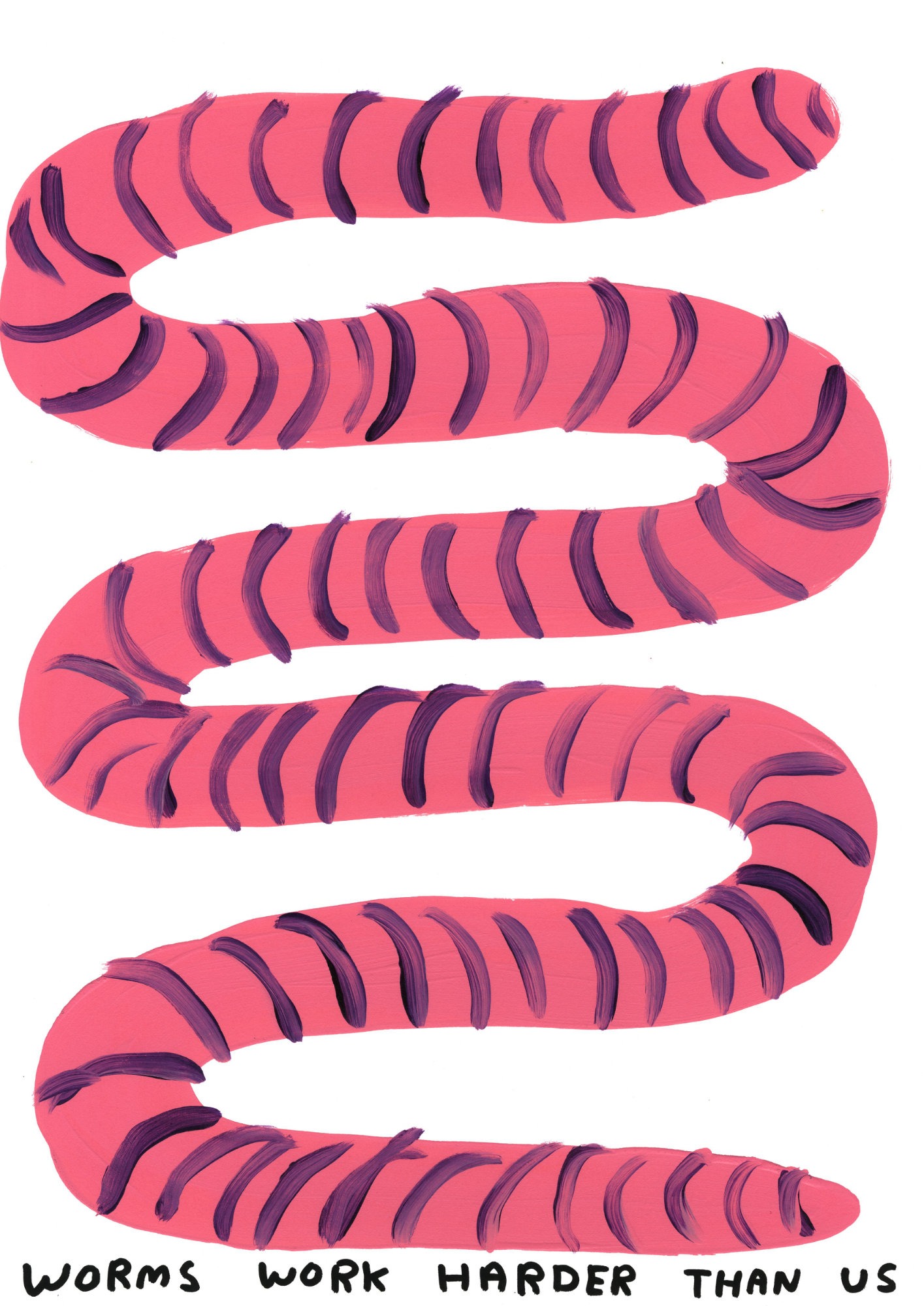 As always, Shrigley’s works are open to interpretation. One moment, the worms seem to signal some latent peril flaring up about to forcefully overpower us. The next, a pleasurable interlude featuring twenty utility animals whose childish apperance makes us smile. Shrigley hits us somewhere between despondency and cheerfulness, gravity and subtle humour, briefly turning our gaze on ourselves. The British artist tackles serious issues effortlessly; a much-needed gesture just now amid racism, climate challenges, and a pandemic.

The exhibition is entitled DO NOT TOUCH THE WORMS and has been created specifically for Copenhagen Contemporary.

The snake pit may appear out of control, but there is a measure of sanity amid the chaos. The worms come to life and slowly expire in a rhythmic cycle of inflation and deflation. This life cycle can be observed on a large-scale LED clock overlooking the snake pit and counting down to the next invigorating puff of air. In Shrigley’s exhibition, earthworms, mostly considered insignificant limp, slimy creatures living in the soil, break through the floor, creating an absurd and inverted scale between man and worm with their tall upright ‘necks’. Along with the clock, the work puts us in mind of our own mortality and our minute stature compared to the forces we are up against. In the end, these same worms will devour us after death and the work becomes, in an instant, a brilliant memento mori moment: remember the inevitability of death.

David Shrigley is perhaps best known for his drawings infused with a good helping of subtle British humour. With discreet hilarity and inimitable subtlety, David Shrigley manages to give socially relevant and politically charged topics a bit of a prod. As a result, he has, notably in Britain, but also in the wider world, earned considerable acclaim as a satirical artist, who uses wit to spike contemporary life. This he did down to a tee in 2016, for example, when he created a bronze sculpture of a hand – a giant ‘thumbs up’ entitled Really Good for the Fourth Plinth Commission in Trafalgar Square in central London, just after the Britons had voted in favour of Brexit, triggering a national conflict. In Denmark, he attracted attention last year at the Heartland Festival at Egeskov Castle, Funen, by installing, in the lake in front of the castle, a thirteen-metre-high inflatable swan entitled Swan Thing, which, from a distance, might equally resemble giving the world a mighty finger.

The outsized worms at CC once again reveal Shrigley’s eminent knack of combining simple form, unpretentious and satirical expression, and complex and serious issues. Today, it seems particularly important to celebrate the role of social satire where humour is utilised as a political commentary, but also to shine a new light on our humdrum everyday lives and our brief existence on this earth. In any case, the slimy worms give us food for thought, no pun intended.

David Shrigley (b.1968) lives and works in Brighton, England, and graduated from the Glasgow School of Art, Scotland, in 1991. He is best known for his humorous and often absurd drawings. In his artistic practice, Shrigley works with a variety of media, including drawing, painting, sculpture, installation, photography, animation, and linocut, all of it addressing themes of everyday life and human behaviour. He also publishes books, takes part in musical collaborative projects, and produces music.

Shrigley has earned considerable international acclaim for his works, for example, receiving an OBE for his contribution to visual art in the New Year Honours list 2020. He has shown internationally, including the Spritmuseum, Stockholm, the Power Station of Art & Design, Shanghai, the National Gallery of Victoria, Melbourne, the Yerba Buena Centre for the Arts, San Francisco, and the Galleri Nicolai Wallner, the National Gallery of Denmark, and Den Frie Centre of Contemporary Art, all of them in Copenhagen.

In 2013, David Shrigley was nominated for the prestigious Turner Prize and, in 2016, he was commissioned to create the sculpture Really Good for Trafalgar Square in London, which was on show until March 2018. In 2019, he was the main artistic feature of the Heartland Music Festival at Egeskov Castle, where he created the work Swan Thing, a thirteen-metre-tall inflatable swan, specifically for the festival.
www.cphco.org