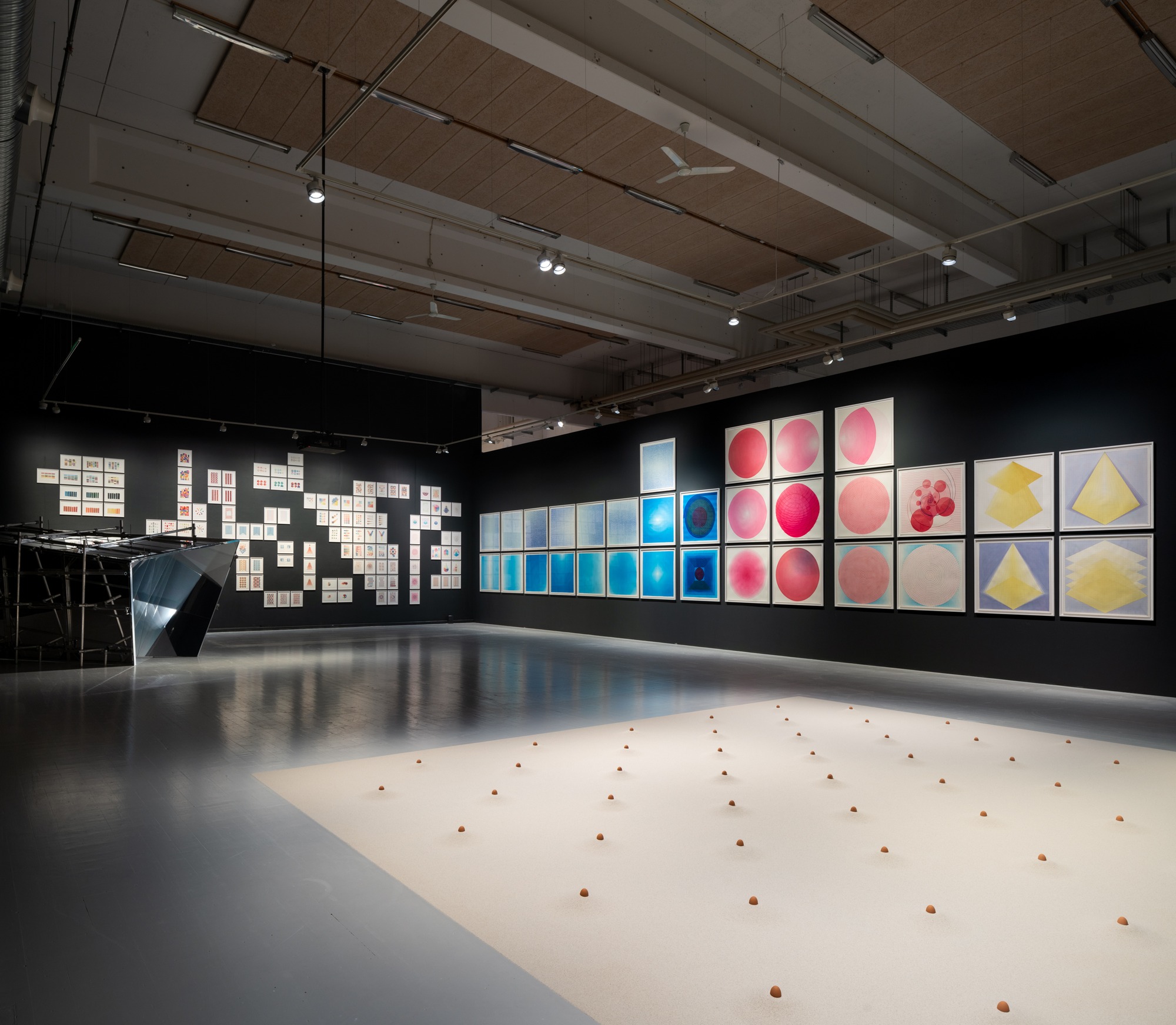 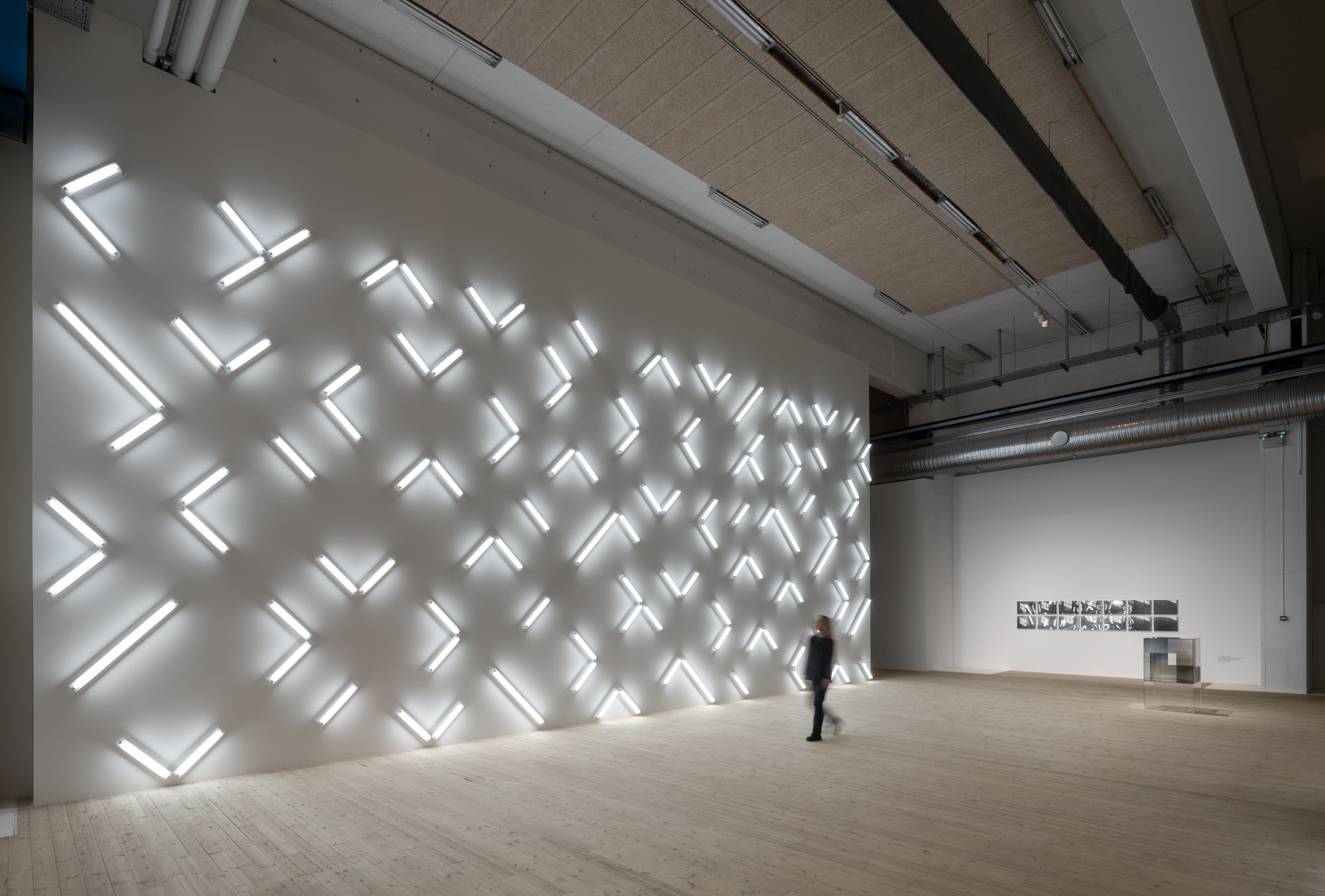 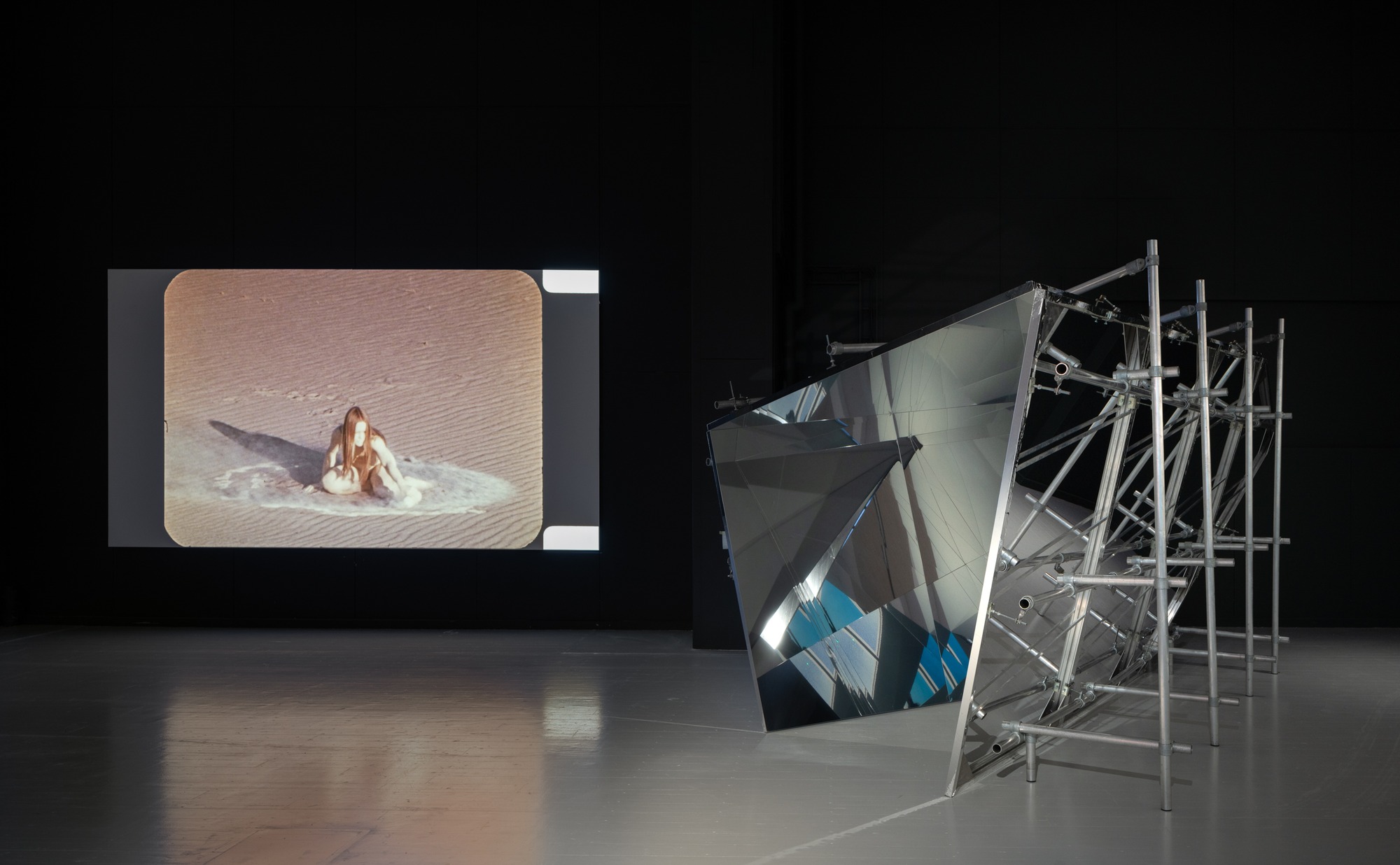 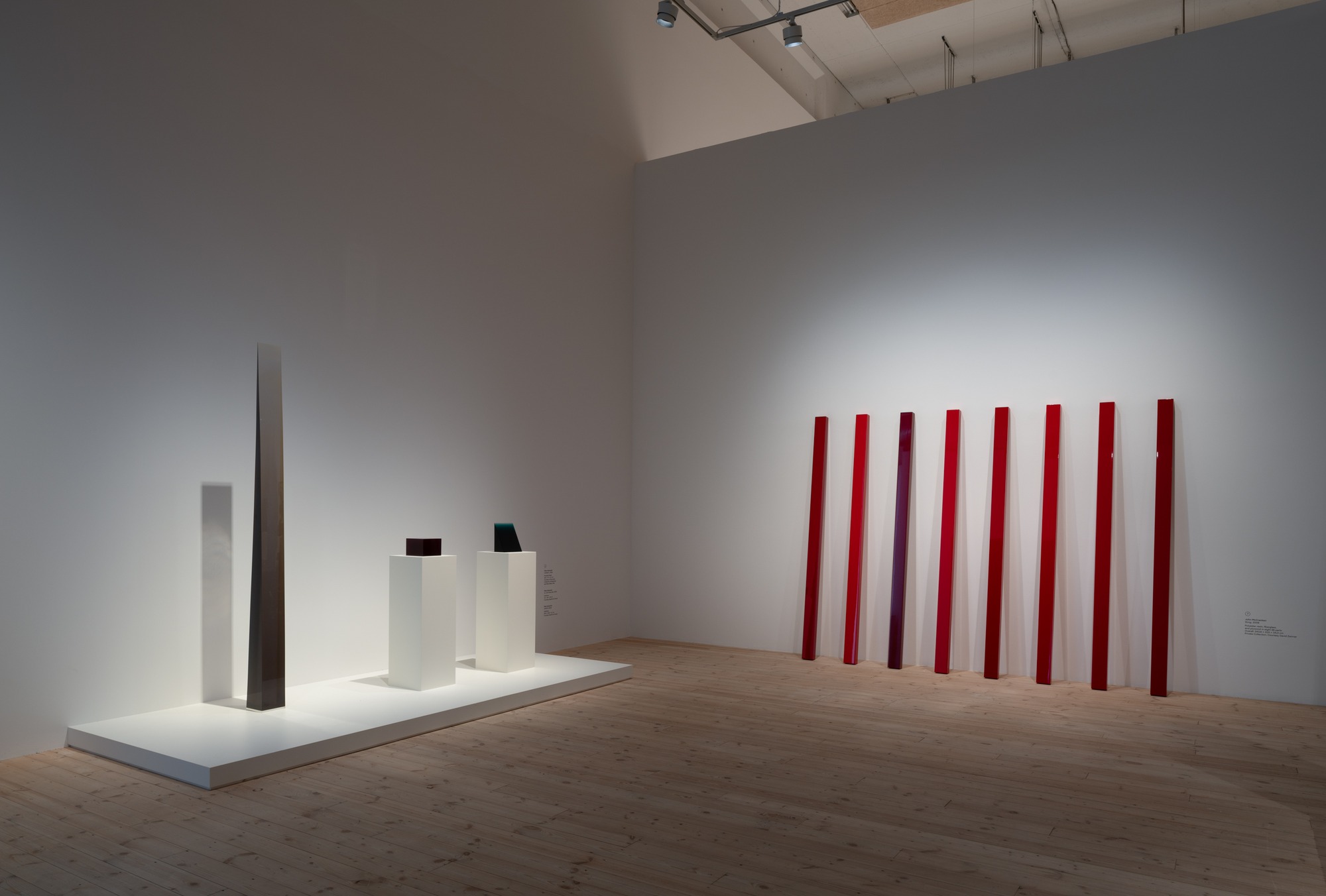 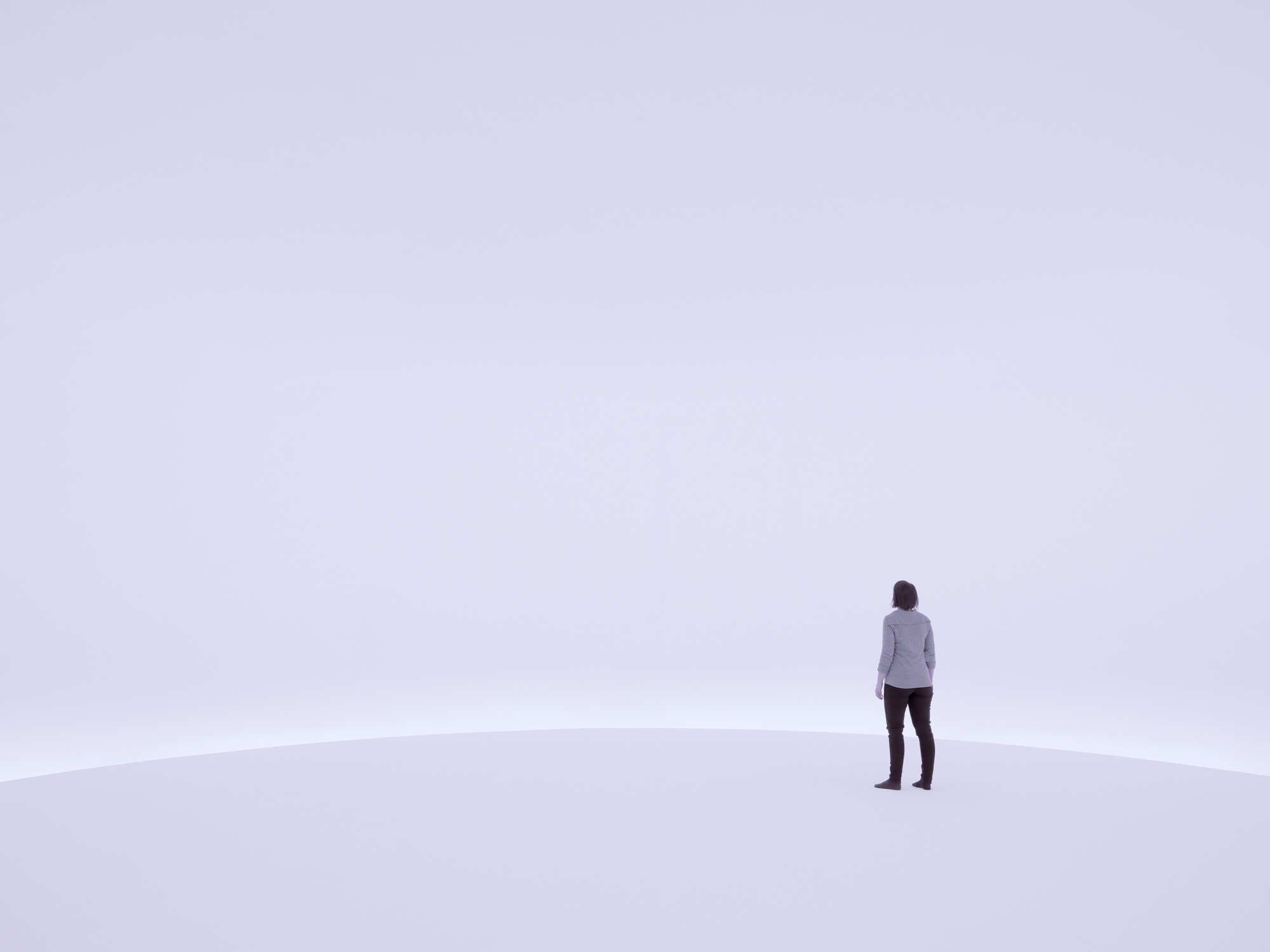 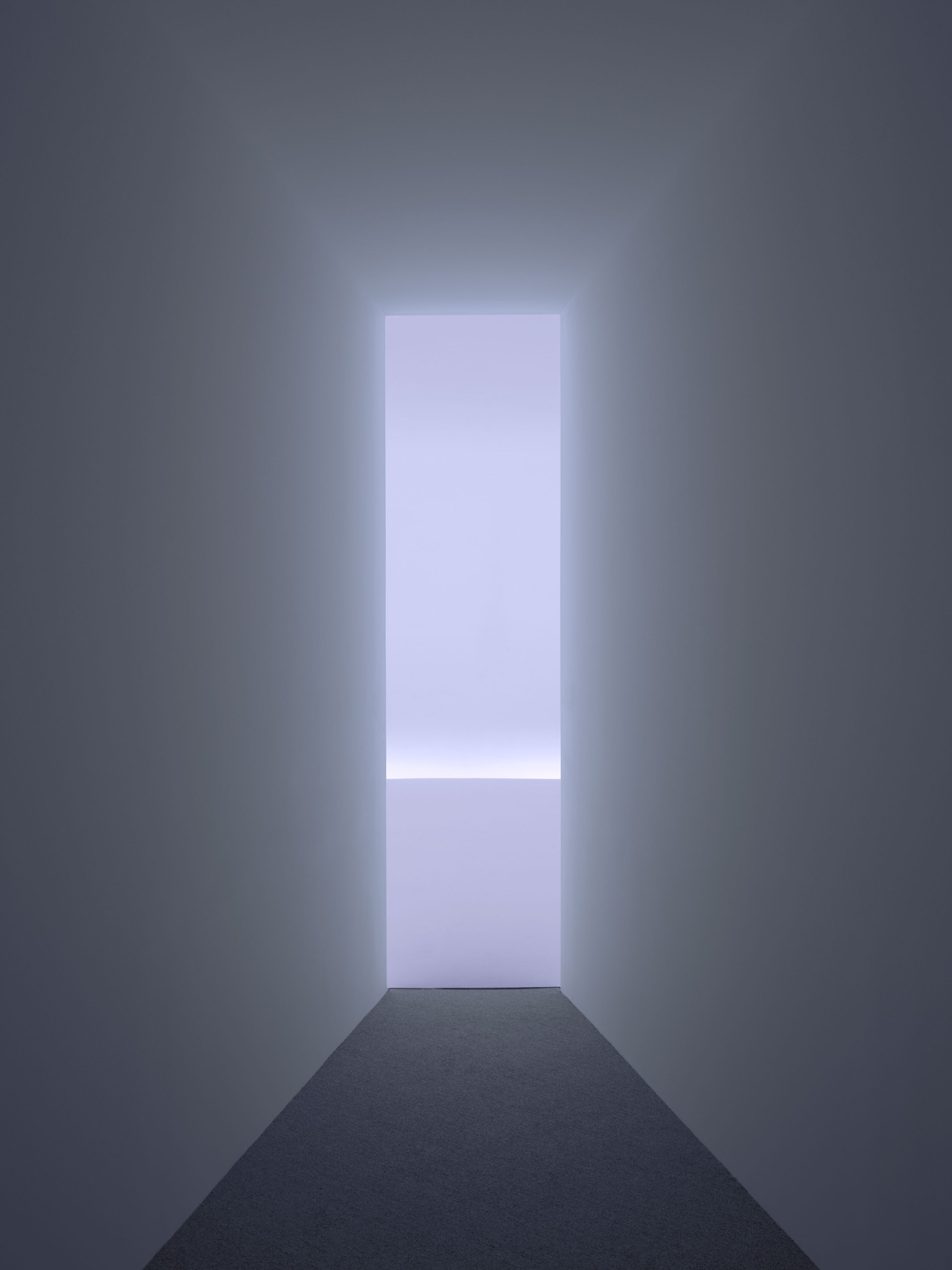 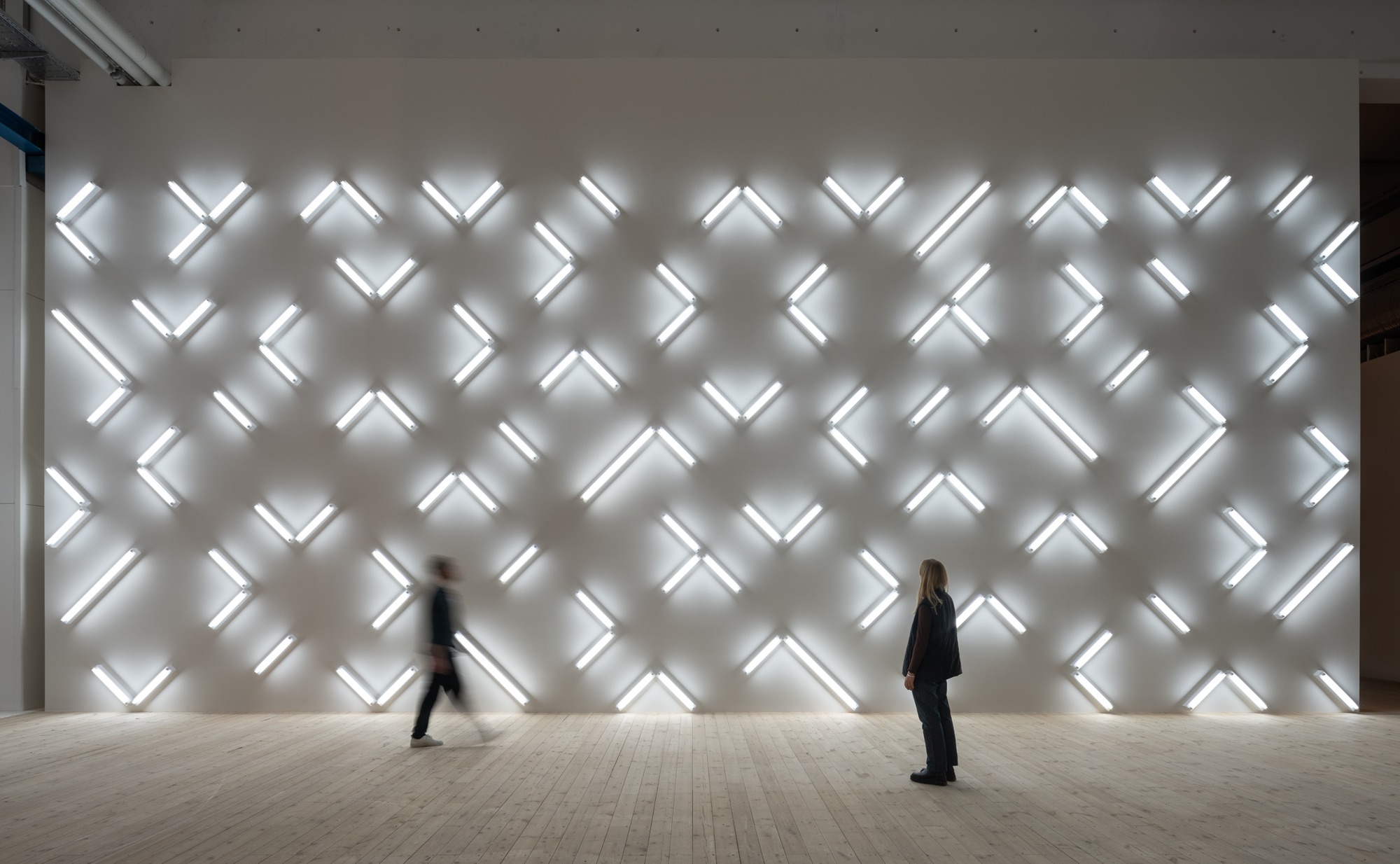 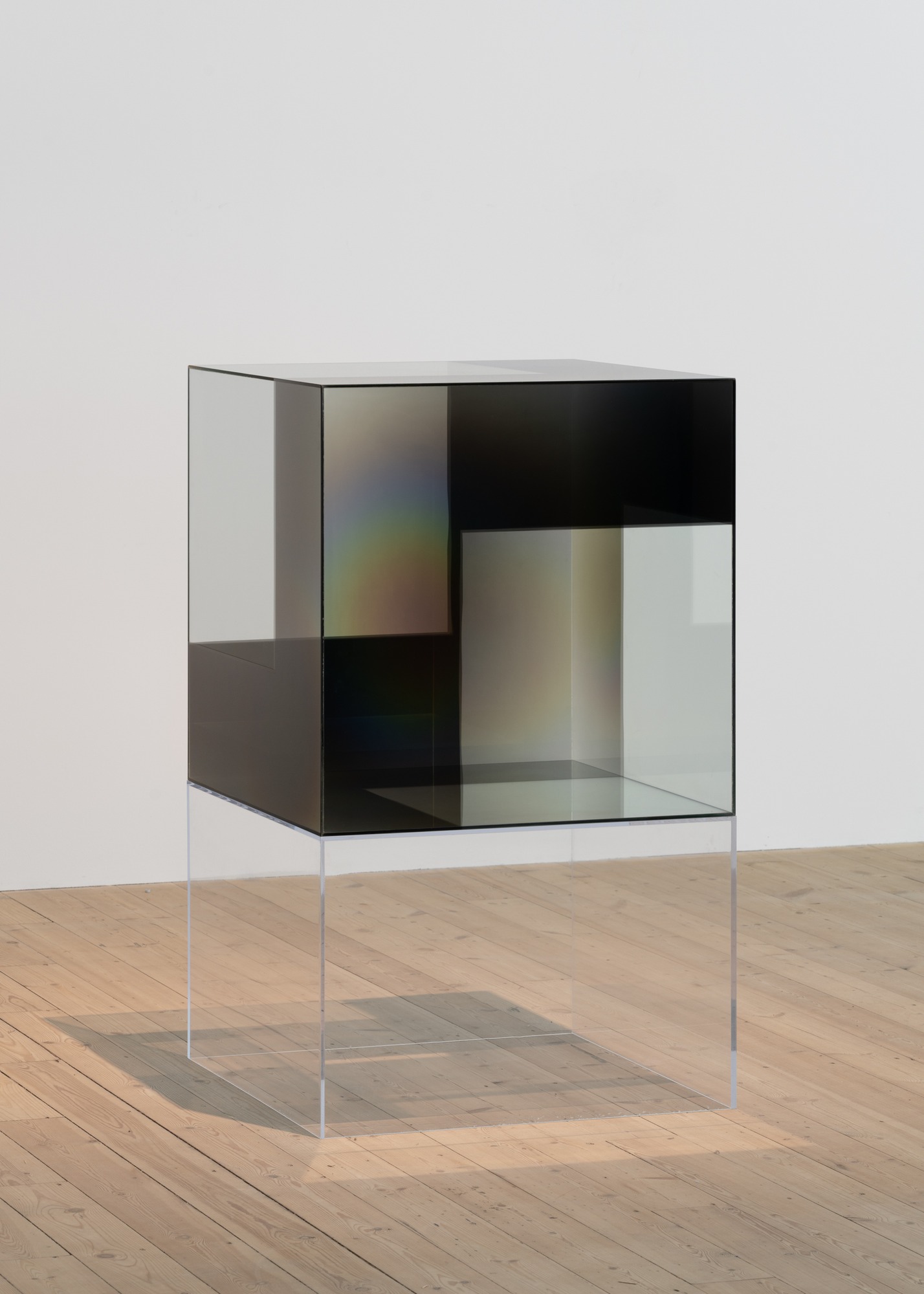 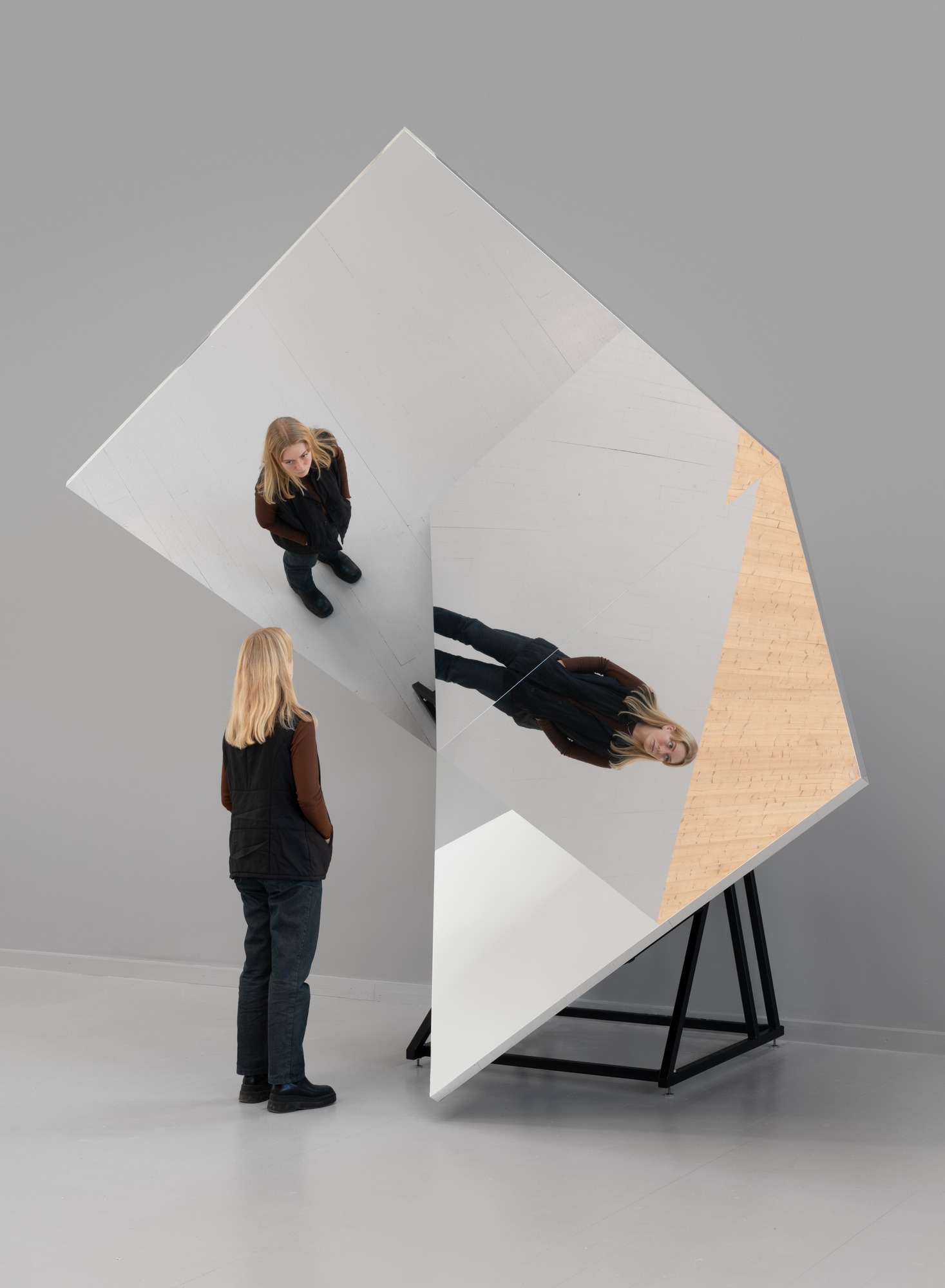 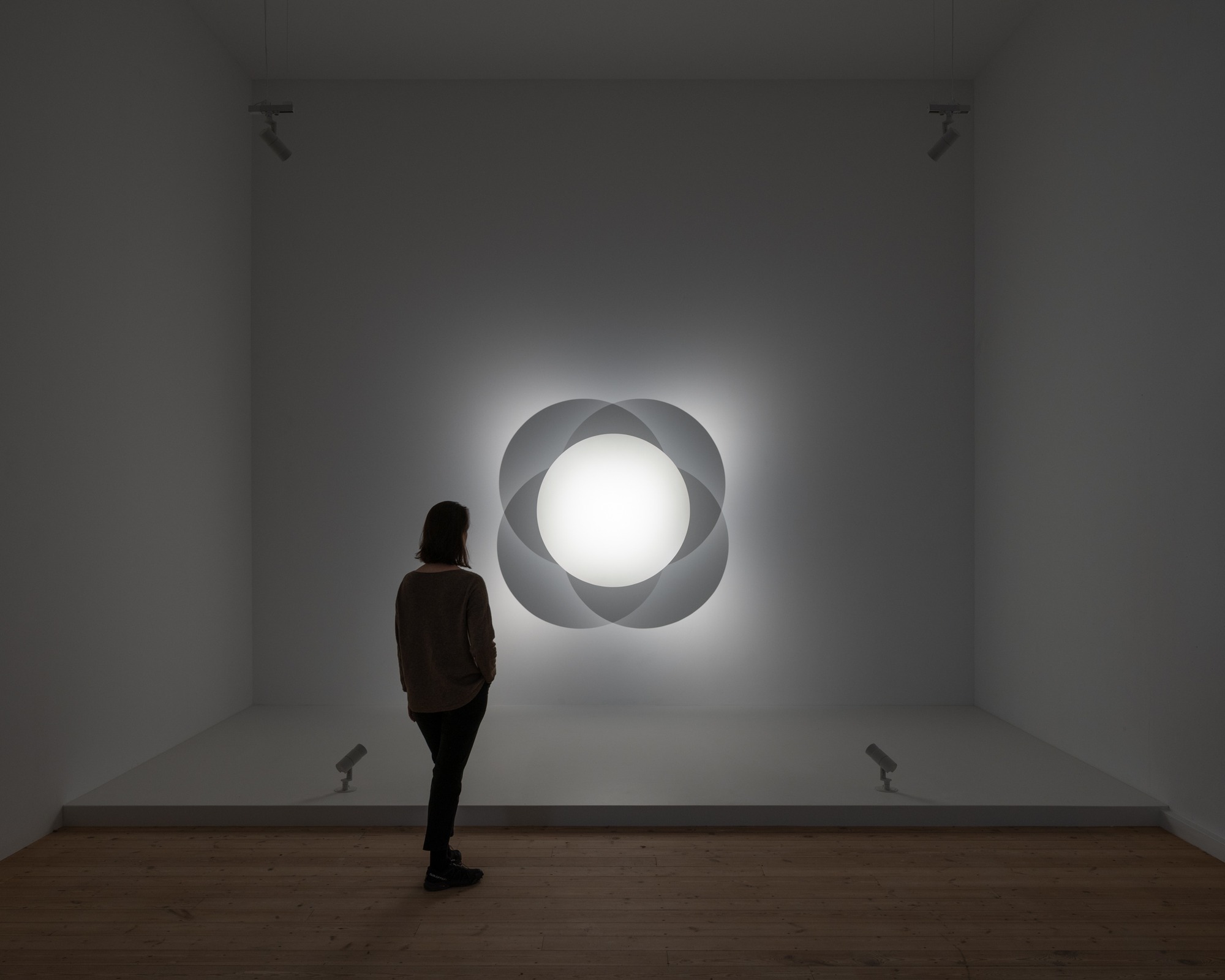 Robert Irwin, Untitled (1965-67)
Courtesy of Dia Art Foundation; Gift of Milly and Arne Glimcher. © Robert Irwin
Light & Space, Copenhagen Contemporary, 2021. Photo: David Stjernholm
For the first time ever in Europe, Copenhagen Contemporary is bringing together a rich array of art-world luminaries in an expansive 5,000 m2 exhibition on the American art movement known as Light and Space.

Light & Space is a chance to experience art by James Turrell, Doug Wheeler, Helen Pashgian, Robert Irwin, Larry Bell, Bruce Nauman, Mary Corse and many others - alongside works by contemporary artists inspired by the pioneering art movement, among them Anish Kapoor, Olafur Eliasson and Jeppe Hein.

The singular exhibition, CC's biggest to date, sprawls across all five exhibition halls and the foyer, presenting a world of light, colour and monumental installations during the darkest months of the year.

In December 2021, Copenhagen Contemporary is opening the exhibition Light & Space, featuring both historical and brand new works from the American light and installation art movement that emerged in Los Angeles in the 1960s. At the time, a number of young artists – now most of them world-renowned – were experimenting with making art out of light and new materials. Collectively known as the Light and Space movement, they include international superstars like James Turrell, Robert Irwin, Mary Corse, Doug Wheeler, Larry Bell, Helen Pashgian and many others.

As an art institution, CC focuses on presenting art that is innovative, large-scale and often technically demanding to display. In the former factory halls of the B&W shipyard, art lovers can look forward to exploring a variety of monumental works pushing the boundaries of the artwork and the viewer's perception across scales and materials - from Robert Irwin's over 16-metre-wide and 8-metre-tall work illuminated by 115 fluorescent tubes to Anish Kapoor's renowned light-absorbing void. From Connie Zehr's delicately sculptural landscape of sand mounds arranged across the floor to Doug Wheeler's dome-shaped installation with a diameter of more than 20 metres erasing spatial boundaries into a luminous horizon. From Larry Bell's human-sized glass cubes inspired by the fog rolling in over Venice Beach to James Turrell's immersive Aftershock – one of his celebrated Ganzfeld works, made specifically for this exhibition, enveloping the guest in an infinite space of light and atmosphere

ART TO PERCEIVE AND EXPERIENCE WITH YOUR WHOLE BODY
In postwar Southern California and Los Angeles, the artists of the Light and Space movement experimented with many of the new industrial materials derived from technological innovations. Searching for new artistic opportunities and expressions, they started collaborating with California's growing aerospace industry and with researchers at the University of California, where cross-pollinating experimentation with light, space and materials was taking place.

Fibreglass, epoxy and coated glass made it possible to create sleek, reflective surfaces, paving the way for a new style of art that expanded the traditional categories of painting and sculpture, changing how we experience art. The new materials that became available in the postwar years triggered explorations of space and light. In turn, the Light and Space artists in various ways contributed to a radical shift in art, away from a focus on object and meaning to an awareness of how art and space is experienced with the body. This shift has influenced generations of artists and architects ever since.

A FIRST IN EUROPE
The Light and Space artists are among the most sought after in the world today. Nonetheless, there has never been such a comprehensive exhibition on the movement in Europe. Following an extended research stay in the US and visits with the artists, CC landed the opportunity to mount the first exhibition of their art in Scandinavia. Works from the artists' studios, adapted specifically to CC's halls, are featured alongside works on loan from international art museums like the Guggenheim and the Dia Art Foundation.

The exhibition features more artists than ever before seen in a presentation of the Light and Space movement, including some of the women artists who were doing committed and engaging work with light, colour and spatial experiments during this period

FROM THE 1960s TO THE PRESENT
Light & Space presents large historical installations alongside new works by the younger generation of contemporary European artists, all exploring the creation of space through light and illuminated materials. The innovations and experiments that the Light and Space artists introduced in the second half of the 20th century have inspired many of today's leading architects and artists. The movement's members blazed a trail for European artists like Anish Kapoor, Olafur Eliasson, AVPD, Ann Veronika Janssens, Jeppe Hein and many others.

Highlighting connections between art from the American West Coast and contemporary European art across time and place, the exhibition offers fresh perspectives on the often-overlooked affinities between the Light and Space movement and today's phenomenologically oriented European art

PARTNERSHIPS IN LEARNING
An exhibition of the great Light and Space masters is unique in a European context, shining a light on the creative cross-pollination between art, architecture and science that has led to new theories, expressions, methods and technologies in art as well as architecture.

The exhibition is also generating new knowledge in the area. CC is producing an extensive accompanying publication in partnership with the German art foundation Light Art Space (LAS), which in December 2021 is showing a large installation by Robert Irwin in Berlin. The publication is due out in spring 2022. Moreover, a twoday-symposium on the Light and Space movement will be held in partnership with the University of Copenhagen in spring 2022, with funding from the Terra Foundation for American Art and the Novo Nordisk Foundation.

Reflecting the artists' close connection to architecture, CC is partnering with the Royal Danish Academy of Architecture, Design and Conservation on a series of talks and lectures by international artists and architects on working with light, colour and space in architecture and art.

CC will use this ambitious exhibition to explore new paths in learning by providing new outreach educational formats centred on experimentation and labs for space, light, colour, physics and mathematics. The Novo Nordisk Foundation is supporting Contemporary Art and Science, a CC Studio learning programme bringing together art and science. Moreover, the LEGO Foundation has made a large donation of transparent LEGO blocks to the CC's learning center, where all age groups can have a go at constructing spaces and spatial installations.