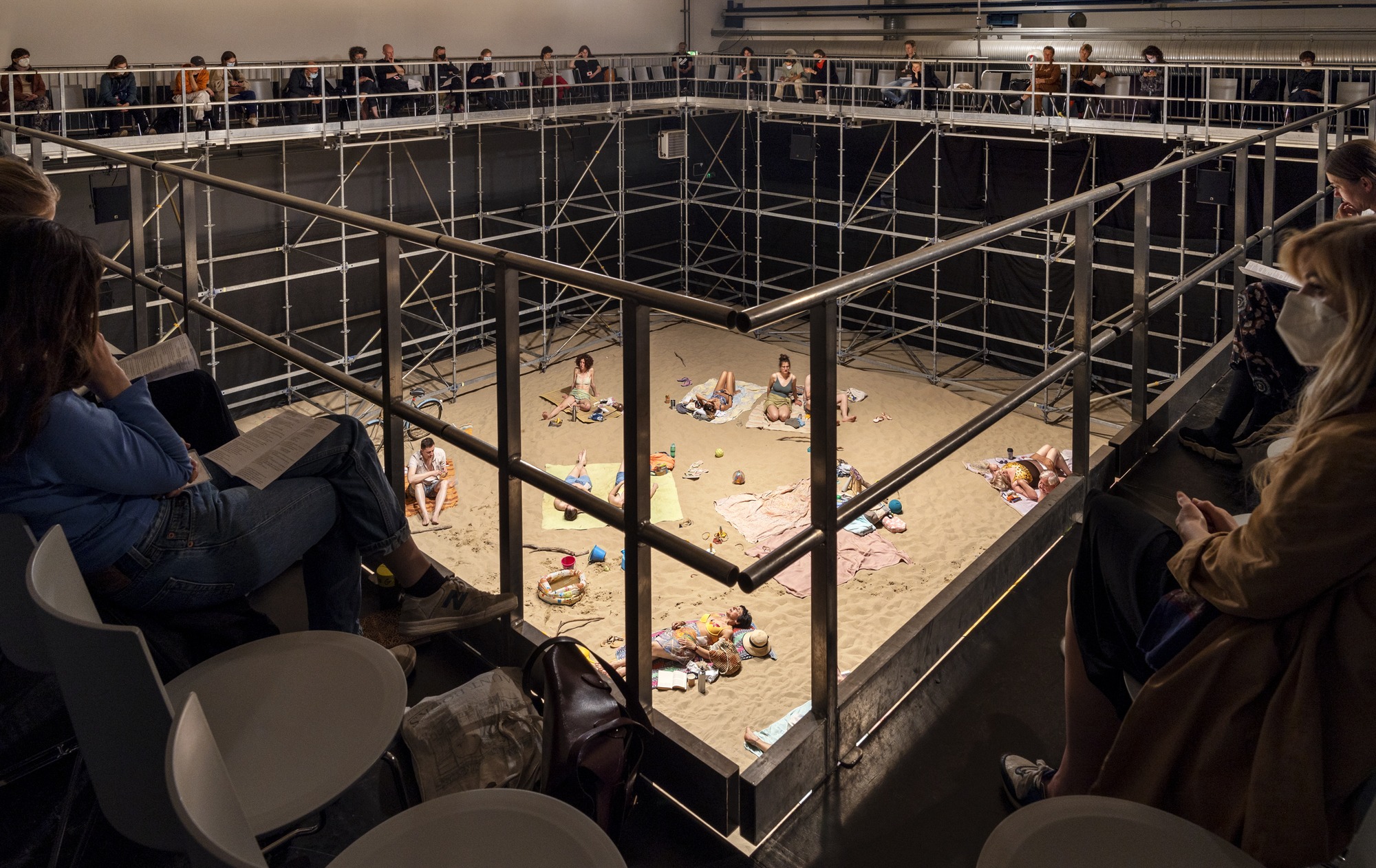 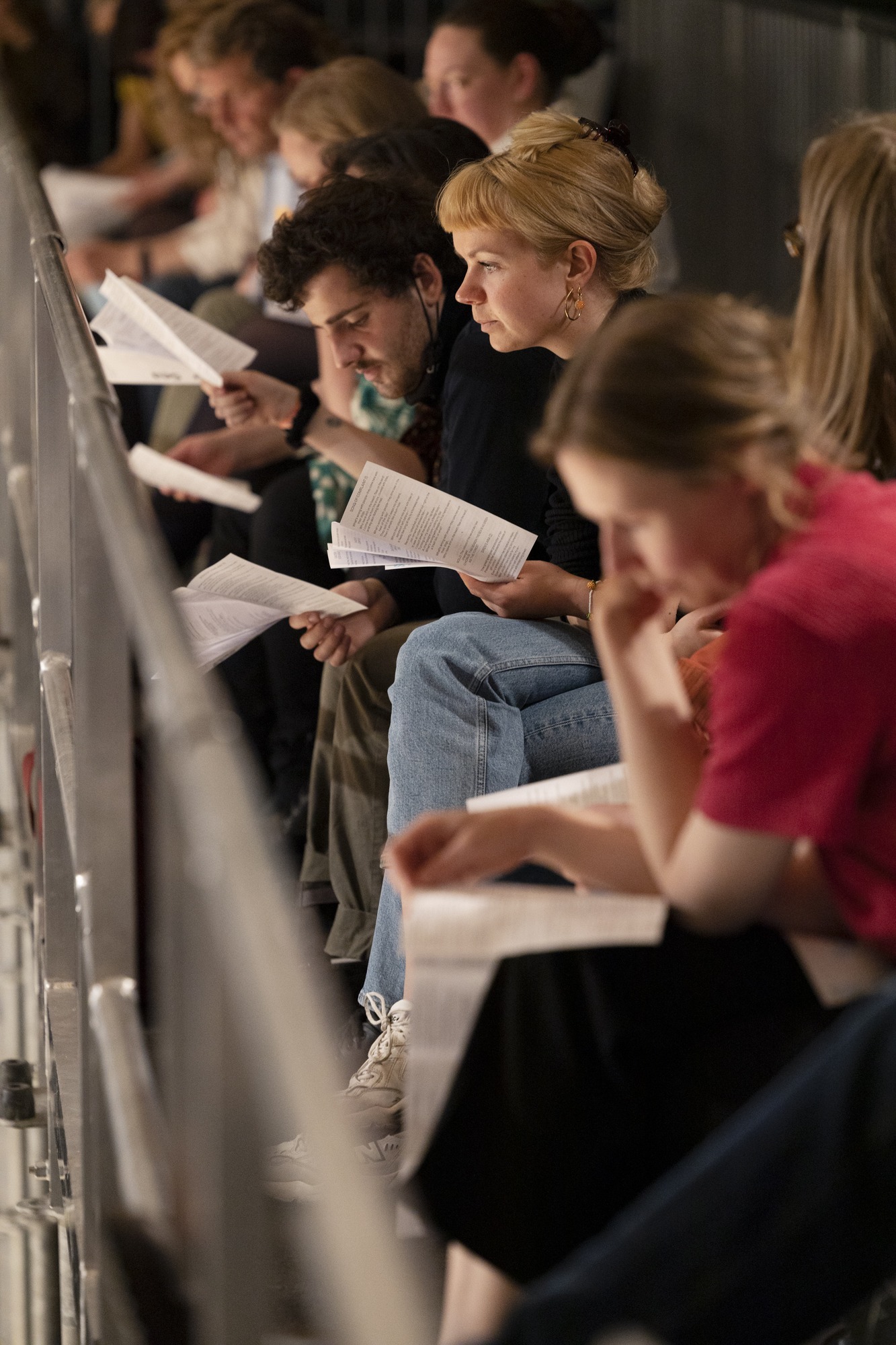 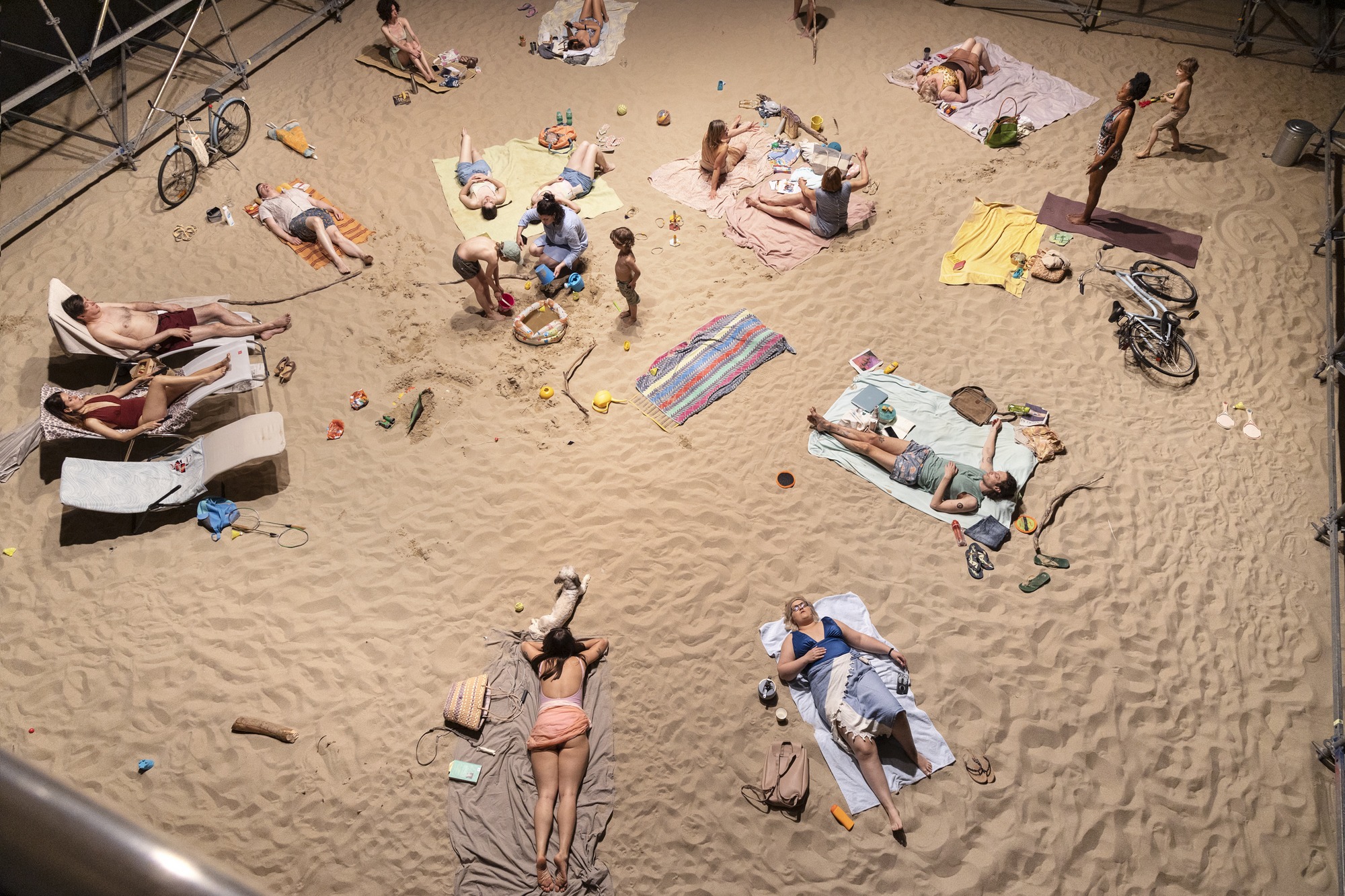 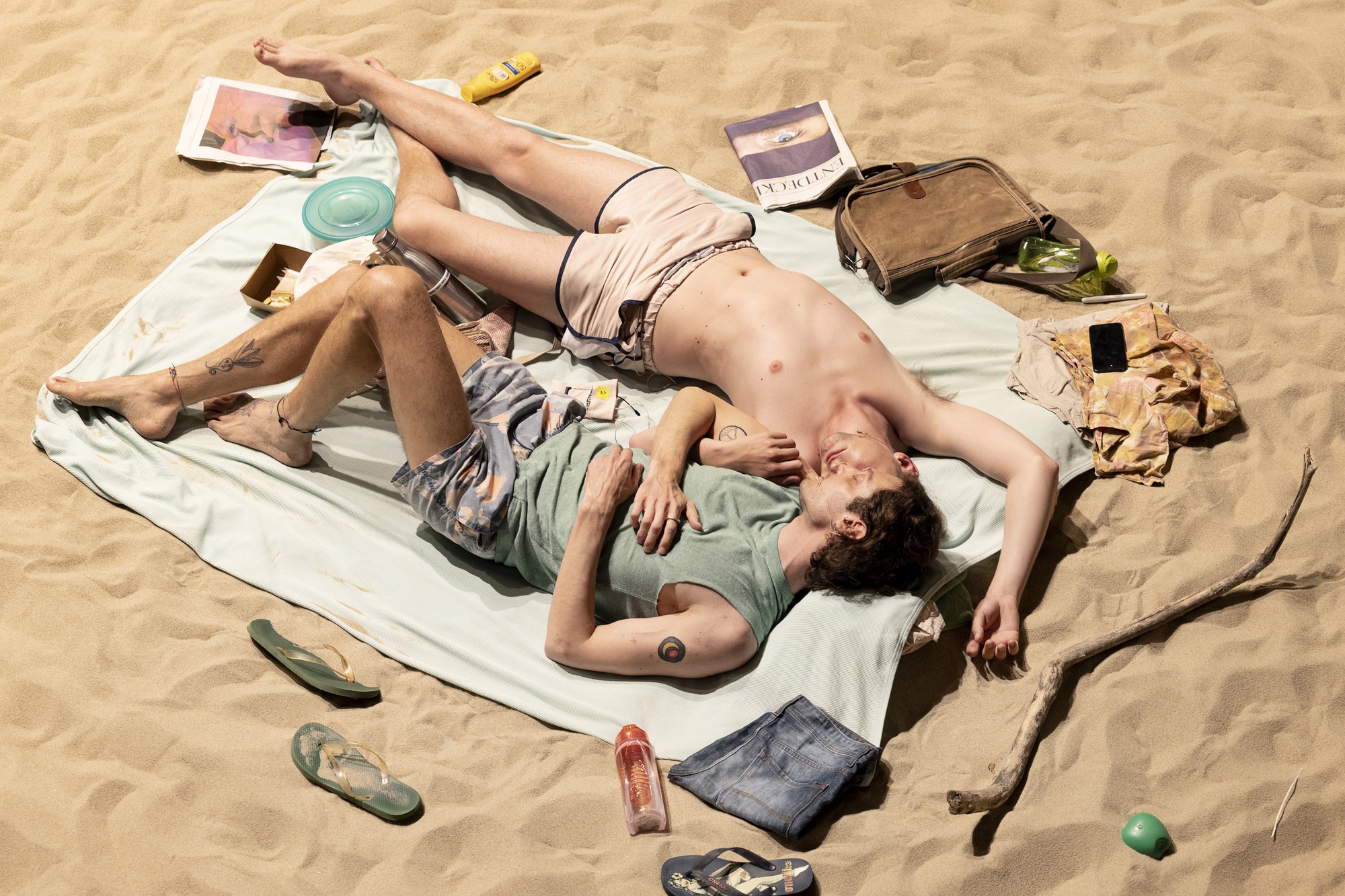 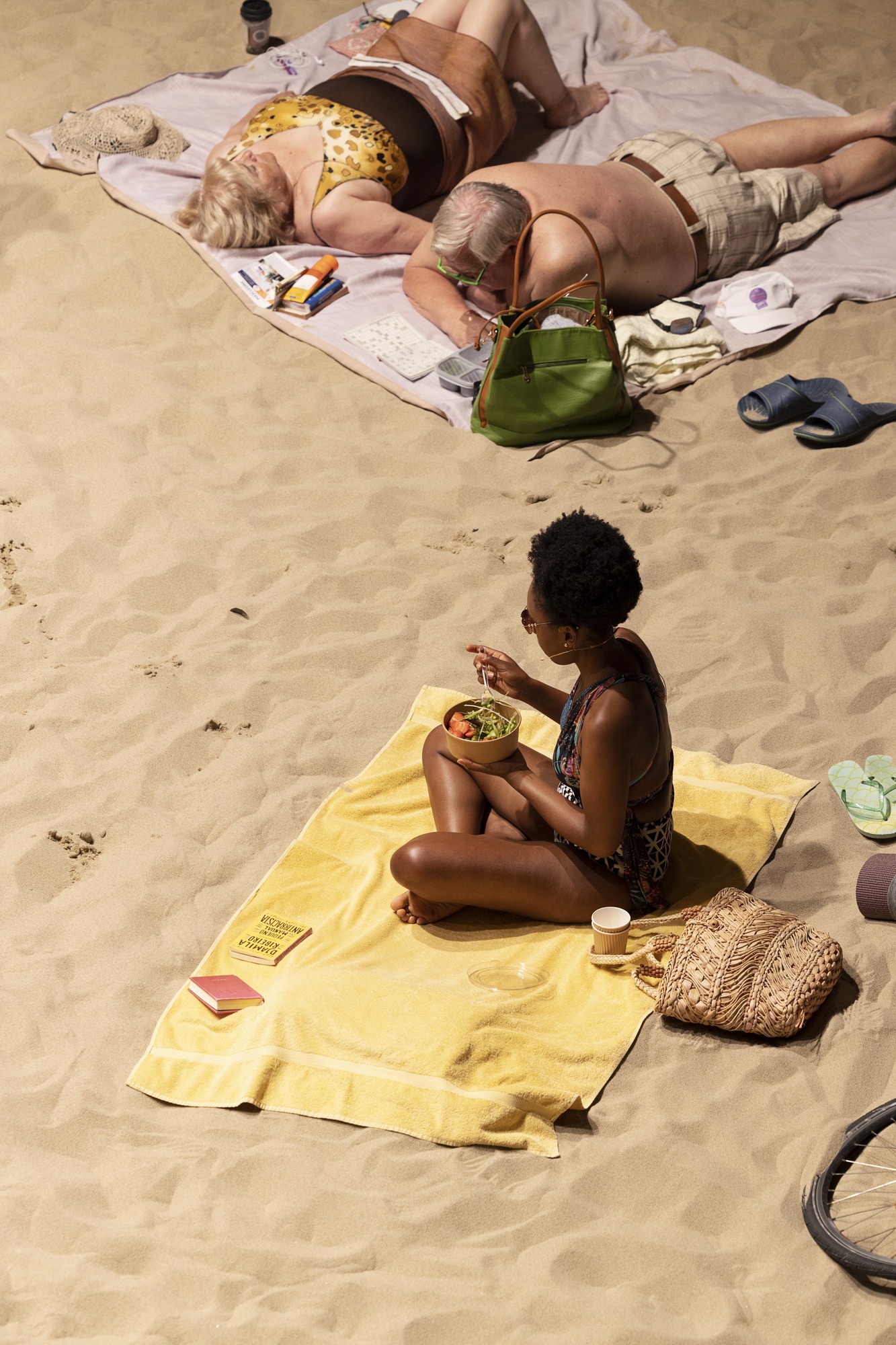 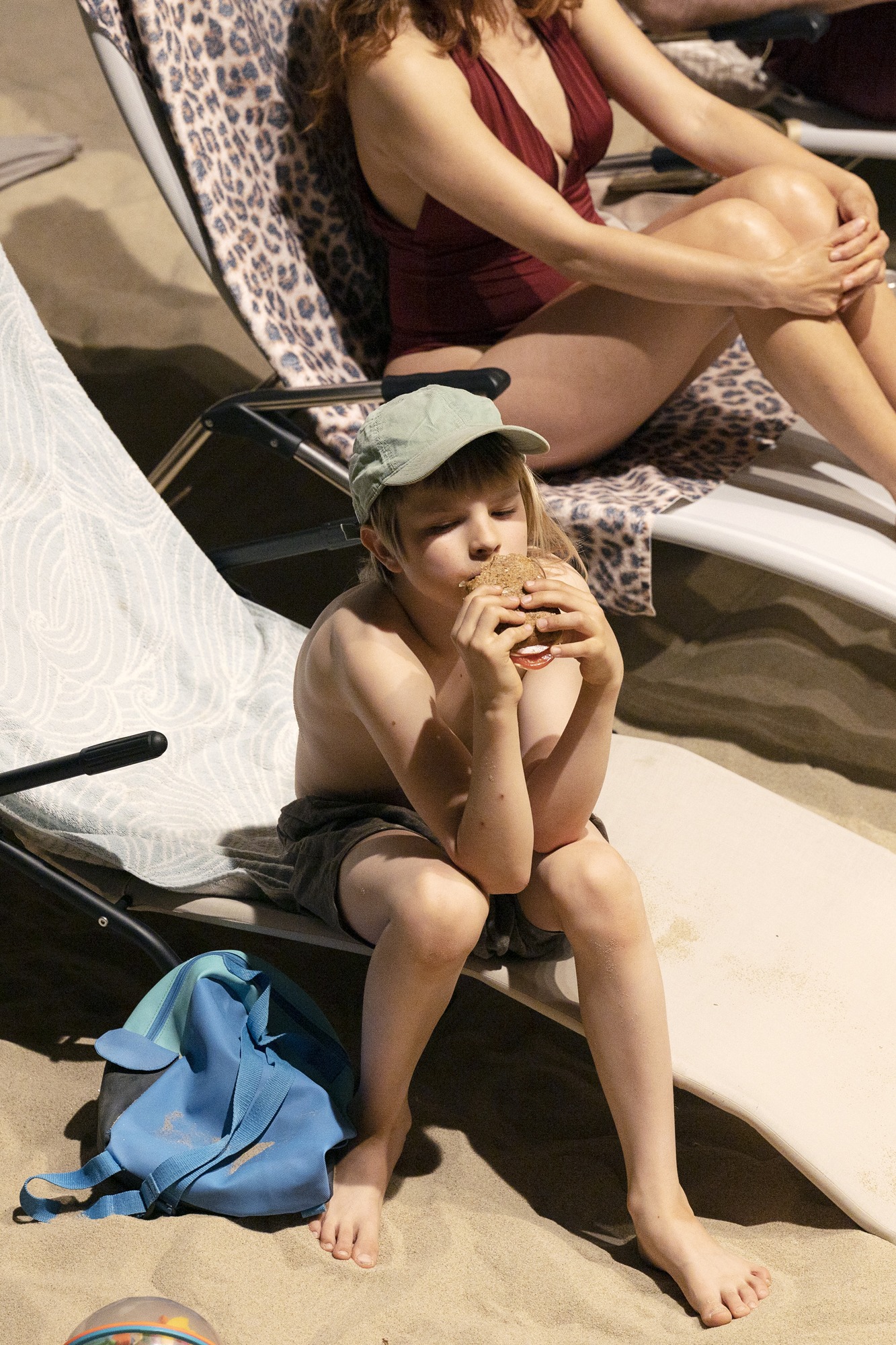 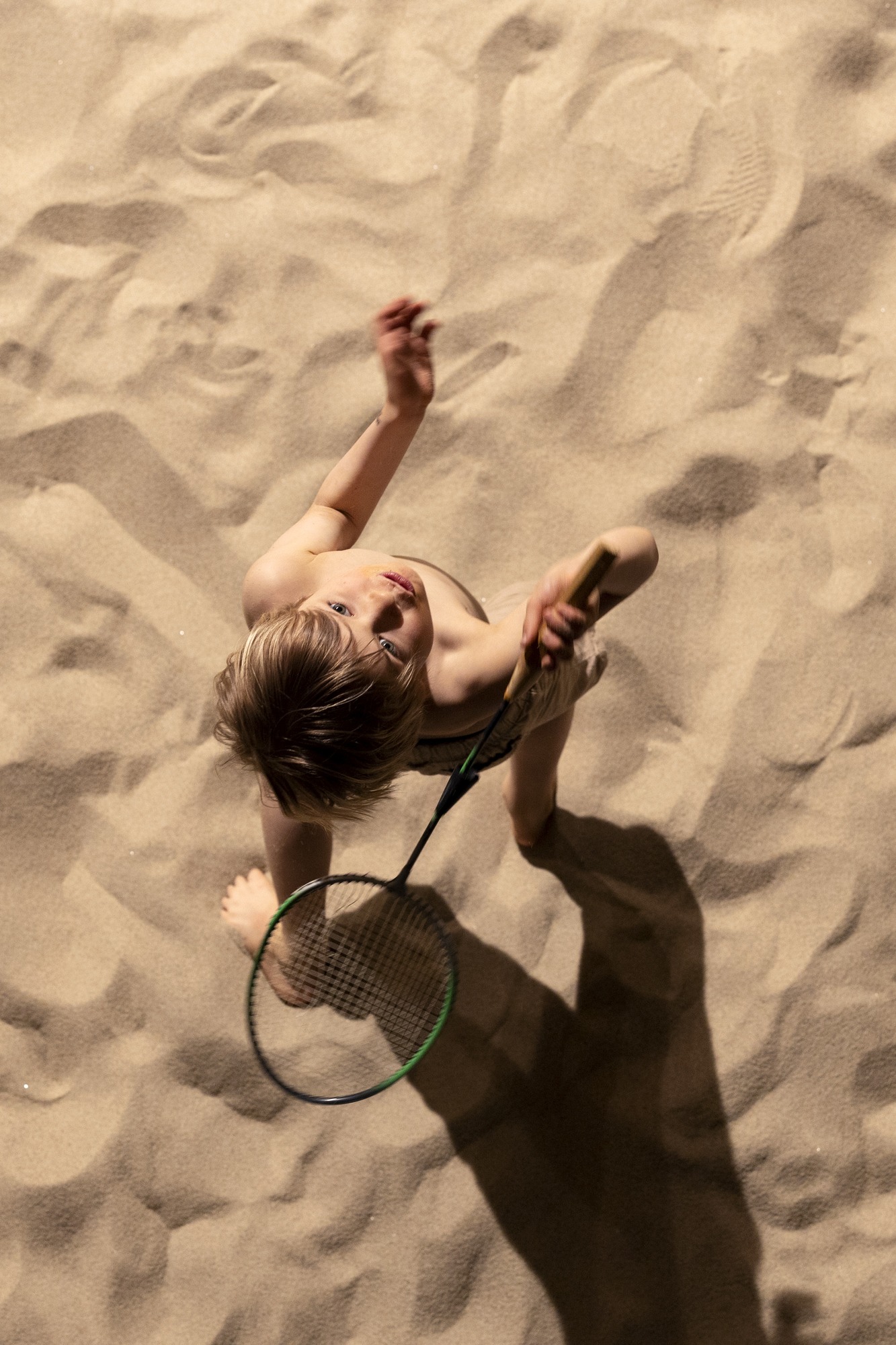 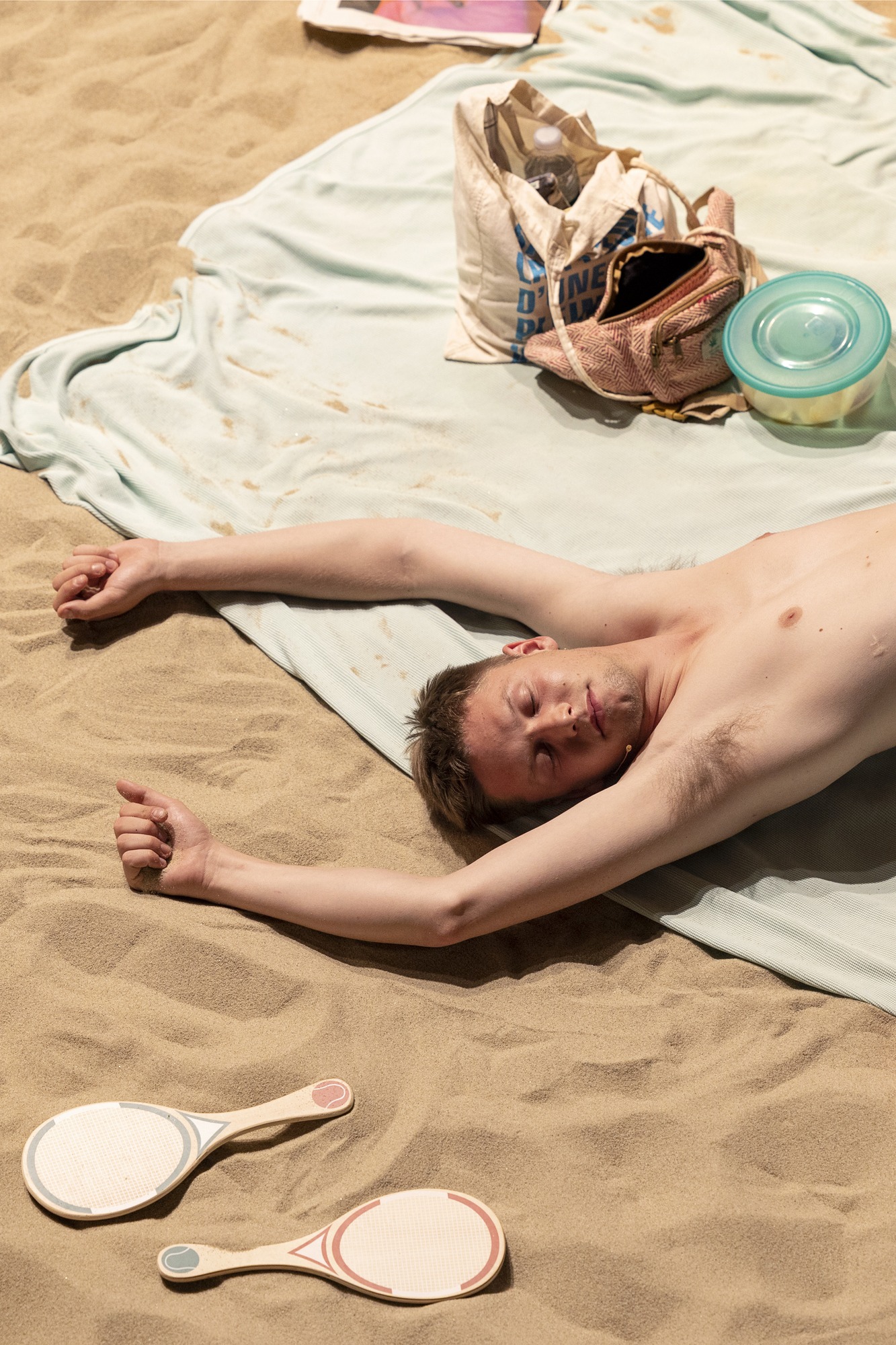 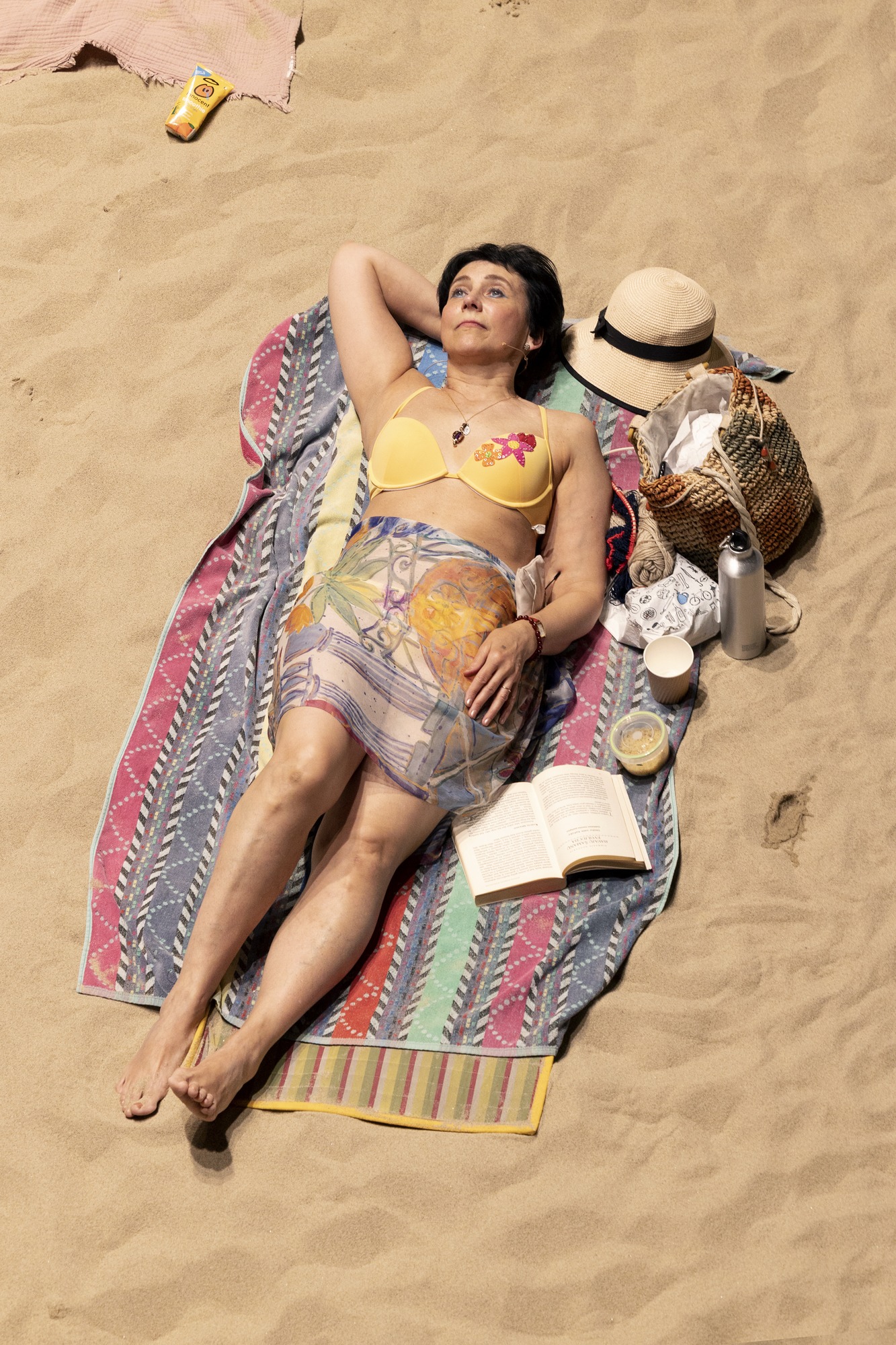 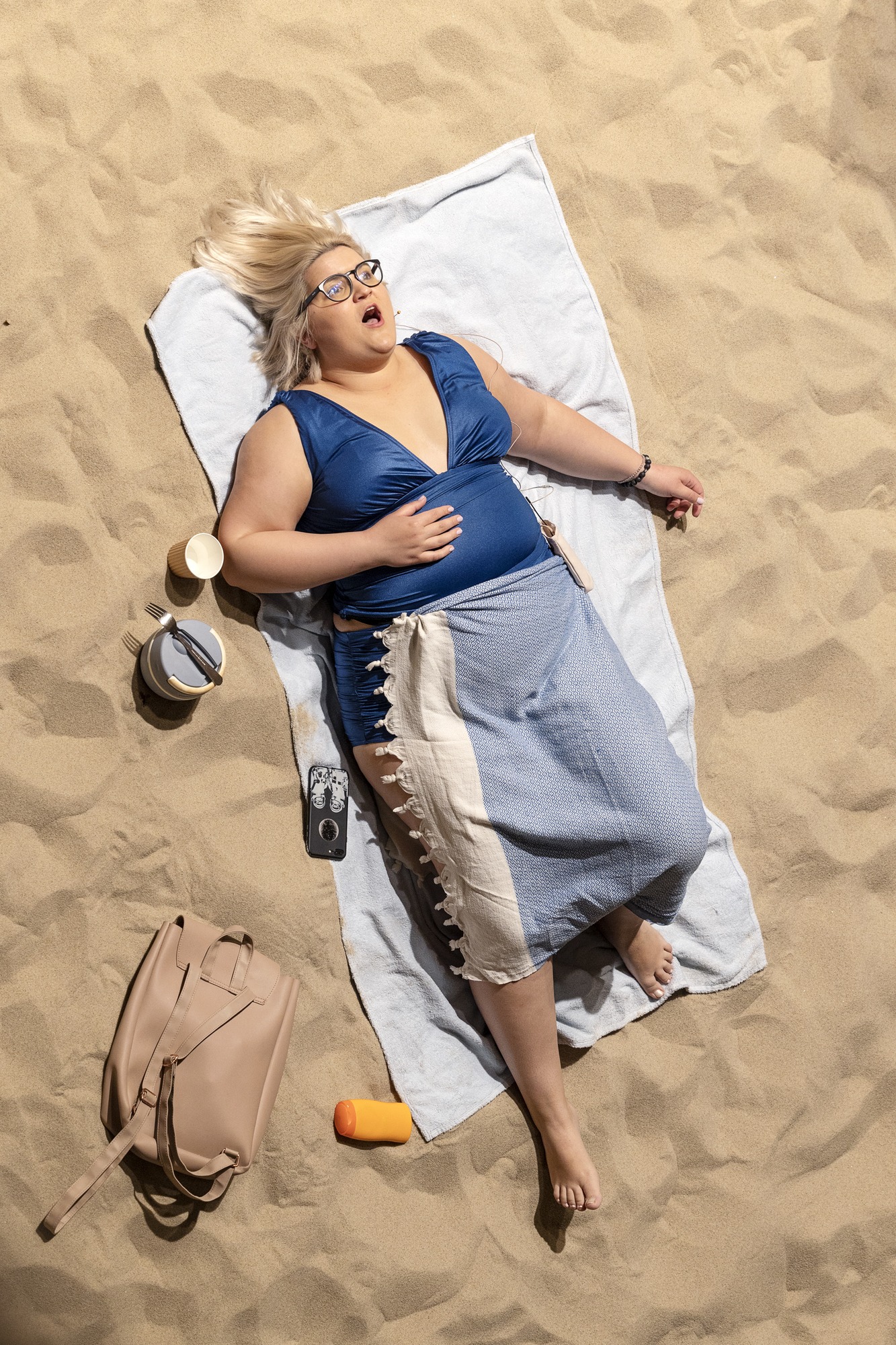 Rugilė Barzdžiukaitė, Vaiva Grainytė and Lina Lapelytė, Sun & Sea. Opera-performance at Copenhagen Contemporary, 2021. Photo: Frida Gregersen
The opera performance Sun & Sea created by the three Lithuanian artists Rugilė Barzdžiukaitė, Vaiva Grainytė, and Lina Lapelytė, has been received with great international acclaim for its humorous, beautiful, and relevant depiction of urgent issues to do with our own future and that of the planet. Presented as Sun & Sea (Marina), the piece was awarded the prestigious Golden Lion for Best National Participation at the 58th Venice Biennale in 2019.
Sun & Sea constitutes a wholly unique work where the audience can experience an opera unfold on an artificial beach composed of light, architecture, and music. In this work, the traditional presentation of the operatic form has been rethought.

Watching from scaffolding above the stage, the audience looks down on a sandy beach, complete with sunbathing visitors, a mosaic of towels, bright bathing suits, and plastic toys.

Imagine a beach – you on it, or better: watching from above – the burning sun, sunscreen and bright bathing suits and sweaty palms and legs. Tired limbs sprawled lazily across a mosaic of towels. Imagine the occasional squeal of children, laughter, the sound of an ice cream van in the distance. The musical rhythm of waves on the surf, a soothing sound (on this particular beach, not elsewhere). The rustling of plastic bags whirling in the air, then silently floating, jellyfish-like, below the waterline. The rumble of a volcano, or of an airplane, or a speedboat. Then a chorus of songs: everyday songs, songs of worry and of boredom, songs of almost nothing. And below them: the slow creaking of an exhausted Earth, a gasp. (Lucia Pietroiusti)

The artists behind Sun & Sea
Sun & Sea started from the quirky image: holidaymakers lying on a sandy beach and singing, their half-naked bodies observed from above, from the perspective of the sun, as if humankind were insects. It took four years, or so, after that until the exposed fragility of human bodies allowed us to find a parallel with the temporality of the colossal body – the body of the Earth. Even though we realised the piece would somehow tackle the topic of climate change, we were hesitant as to how such a big and pressing subject could be approached in a subtle and non-alarmingly didactic way. The libretto of the piece is set as a mosaic of stories, inner monologues, dreams, and thoughts sung as solos and as a chorus by the beachgoers. This ‘soup’ of stories might sound like a mundane and carefree buzz, however, in this both liturgical, poppy, and synthetic ocean of songs, one can feel an impending threat. The picture of enjoyable holidays belies the consequences of this inertia – planetary resources being extracted as if sipping fizzy Piña Coladas. (Vaiva Grainytė on behalf of the artistic team)

Sun & Sea is the second collaboration between the three artists.
The staging of Sun & Sea at Copenhagen Contemporary is part of a major Nordic collaboration which takes the work on an extensive tour of the Scandinavian countries. Over the course of 2020–2022, the work has, and will be, presented in Norway at the music festival Borealis, Bergen (2020); in Sweden in collaboration with Malmö Konsthall (2021), at the Reykjavik Arts Festival in Iceland (2022), and at the Helsinki Festival in Finland (2022).

CPH STAGE & TRAVERS
CPH STAGE is Denmark’s largest performing arts festival of professional adult theatre and takes place in Copenhagen every year at the end of May to the beginning of June. Over a period of ten days, the festival presents the breadth of Danish theatre right now as well as successful international touring productions. CPH STAGE is an opportunity to be surprised and forge new paths in the Danish theatre world. In addition to the performances, CPH STAGE offers events, readings, debates, seminars, parties, and much more.

TRAVERS is a cross-art project offering professional artists from home and abroad the opportunity to challenge their habitual ways of thinking, expand their artistic language, and seek out collaborations across art forms.
TRAVERS strives to inspire interdisciplinary processes, paving the way for new works and collaborations across the art forms of music, literature, visual arts, architecture, film, and the performing arts. This year will see a continued investigation of the theme ‘Confront the Future’ where artists and researchers from around the world will explore how the perspective of the future can incite new ideas, work methods, and artistic interactions. A number of hosts from home and abroad will put themselves and their artistic practices to the test in order to explore, along with the participants, how art and the future can affect one another.