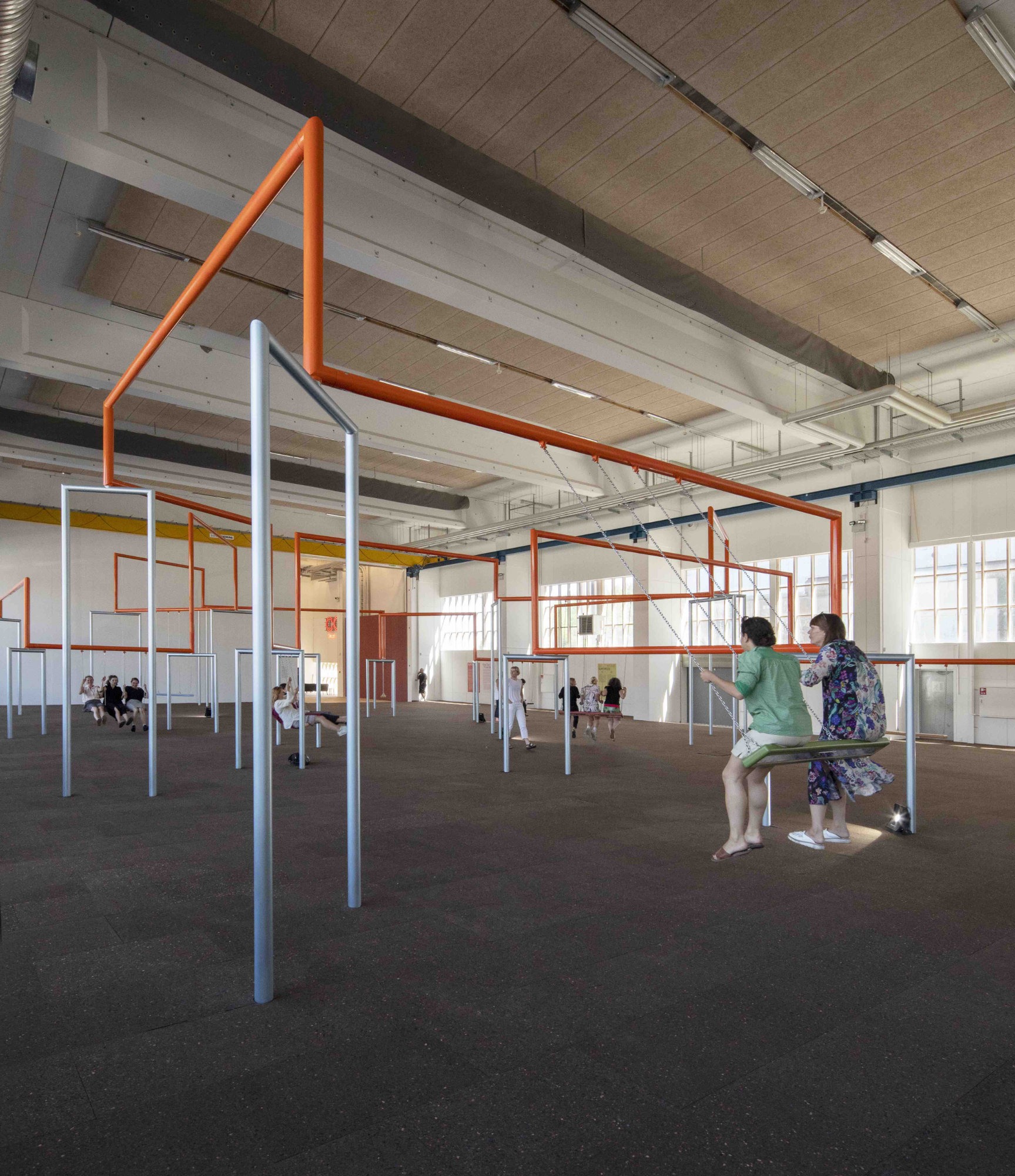 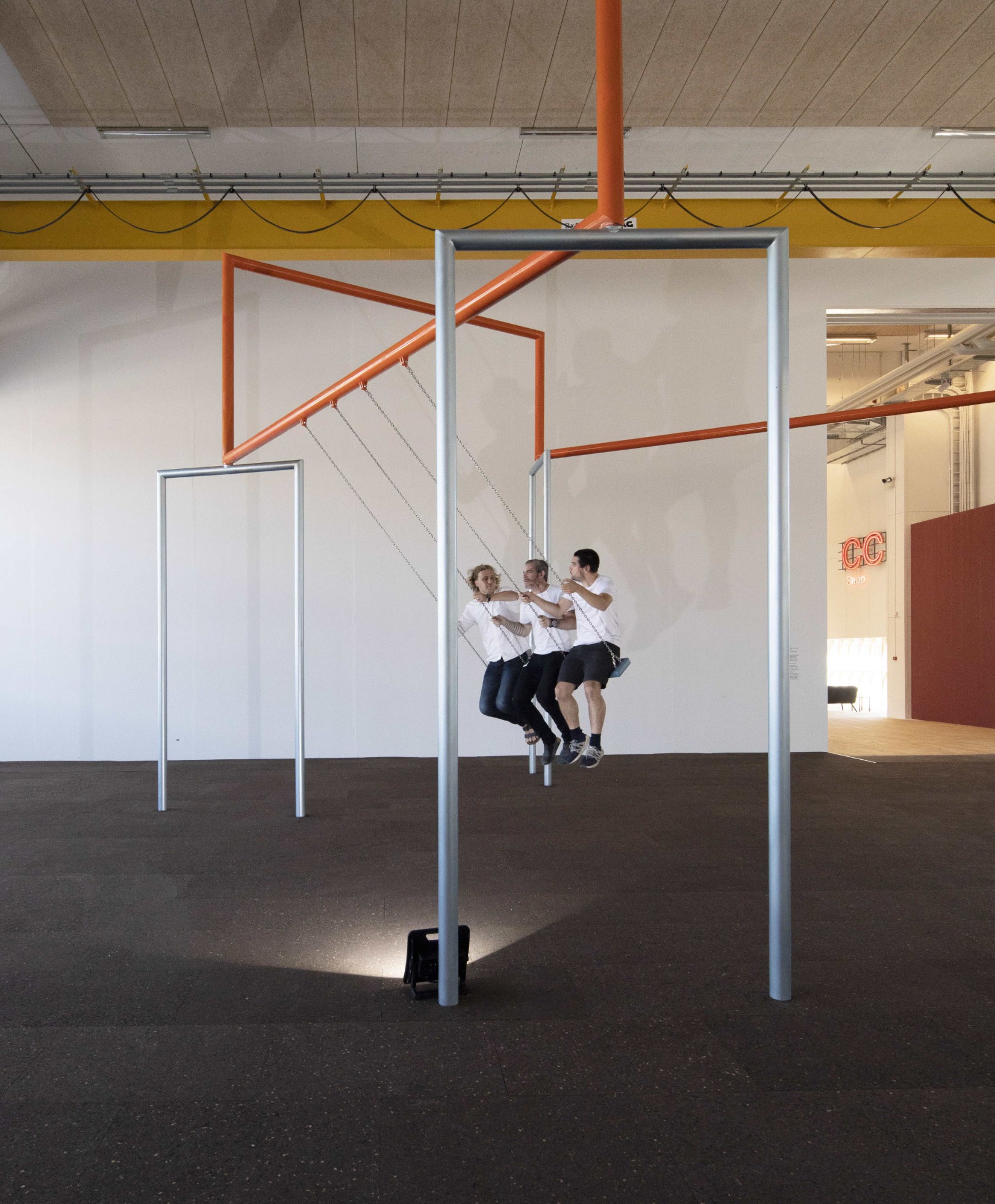 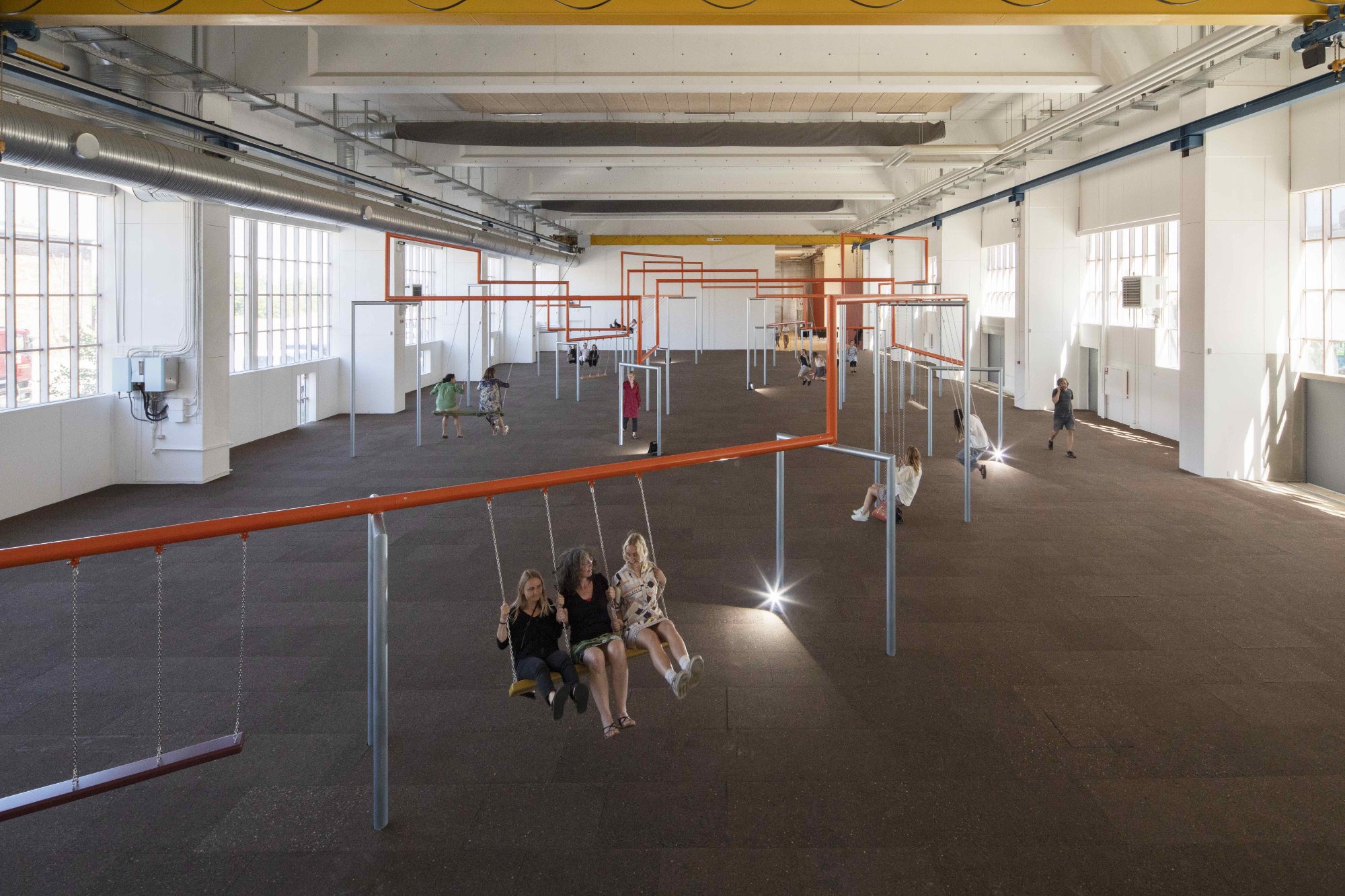 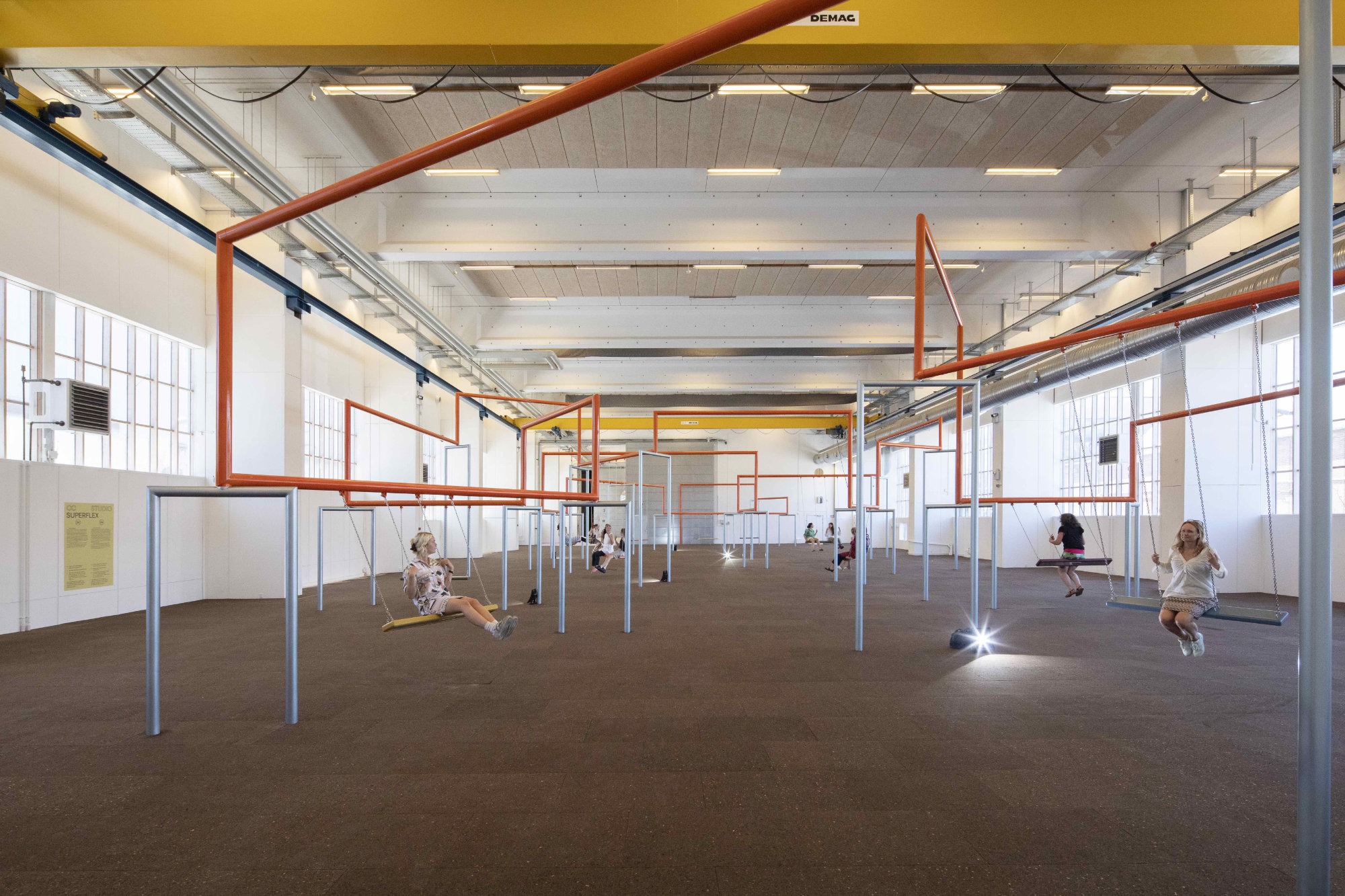 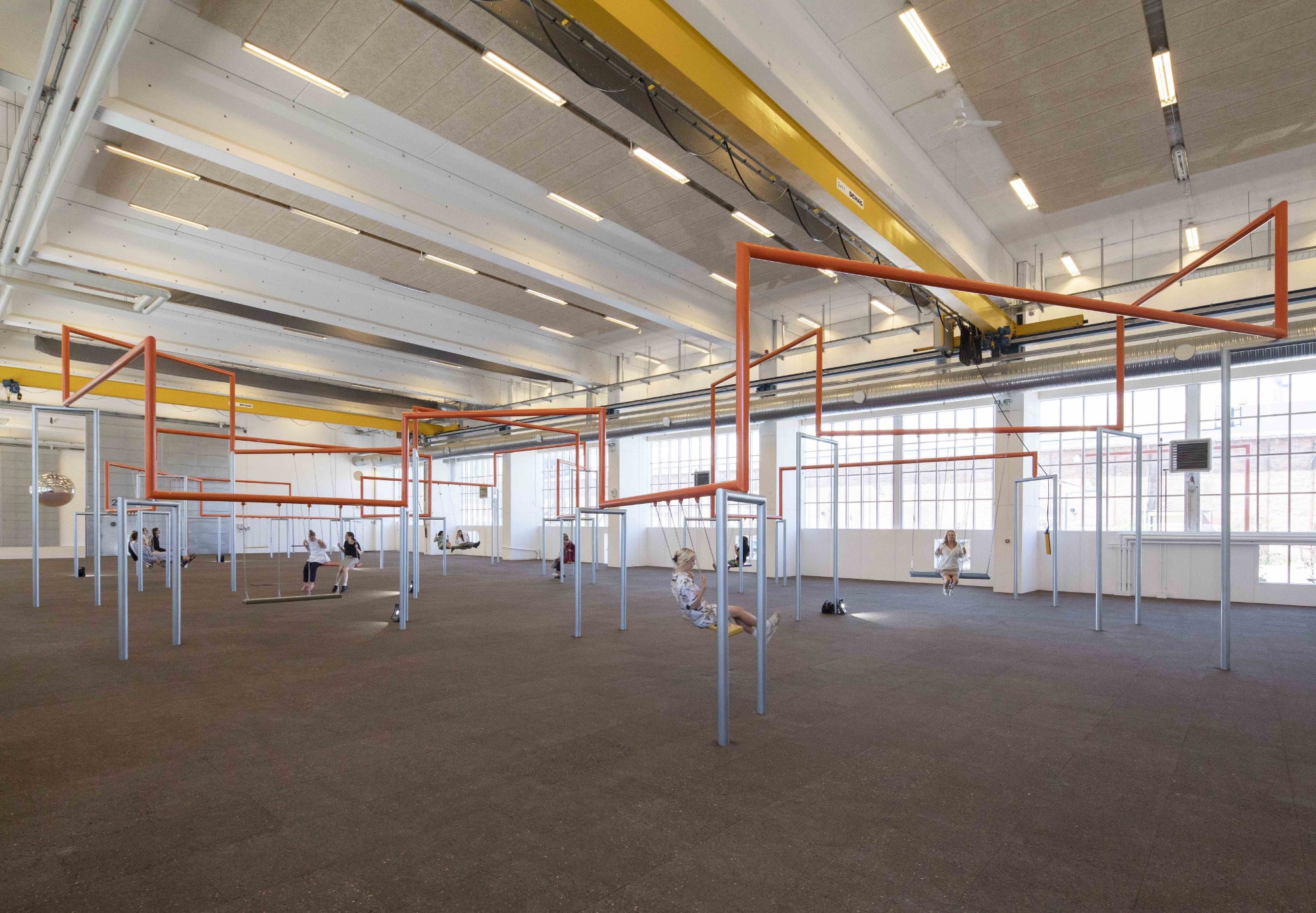 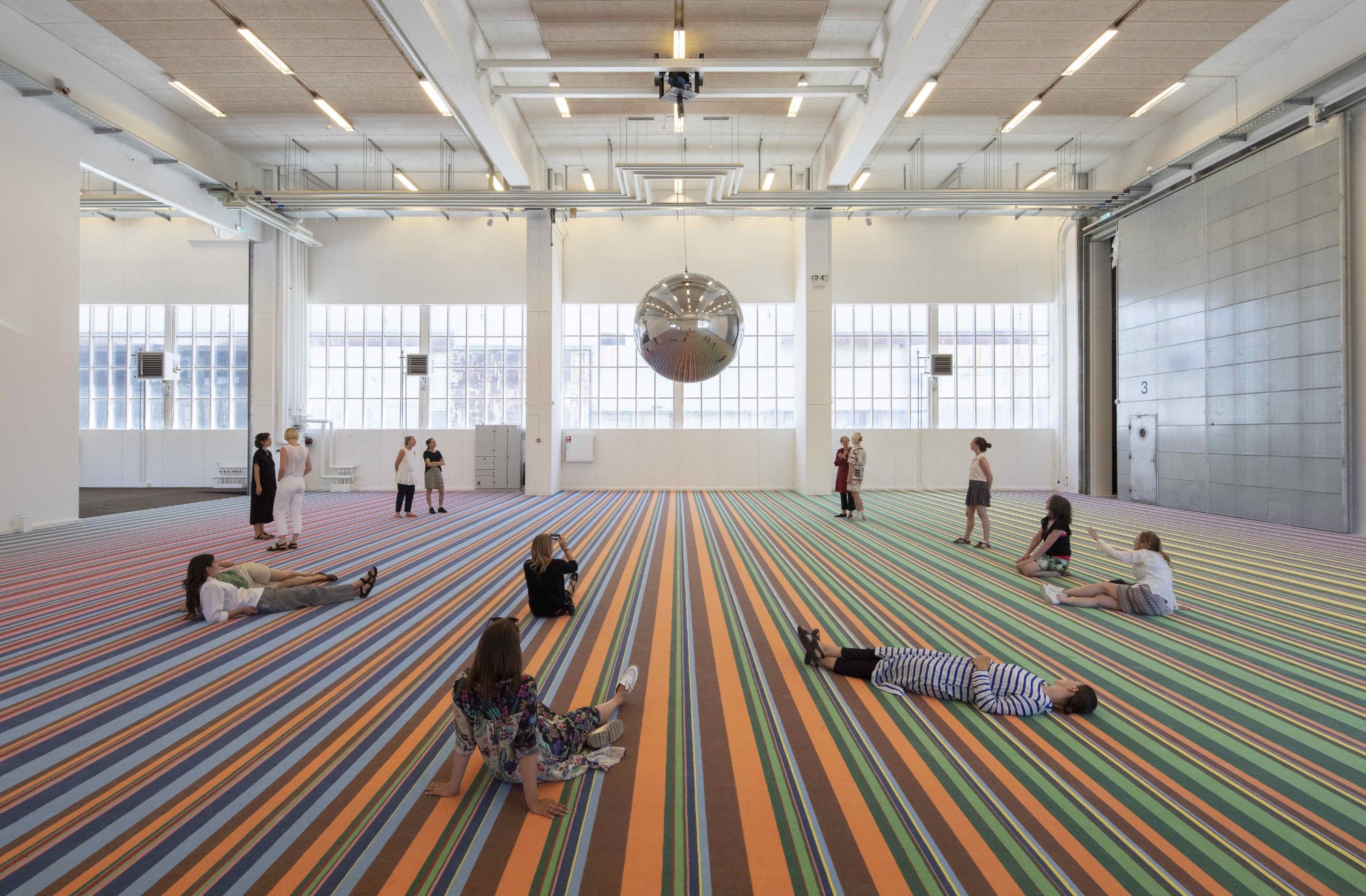 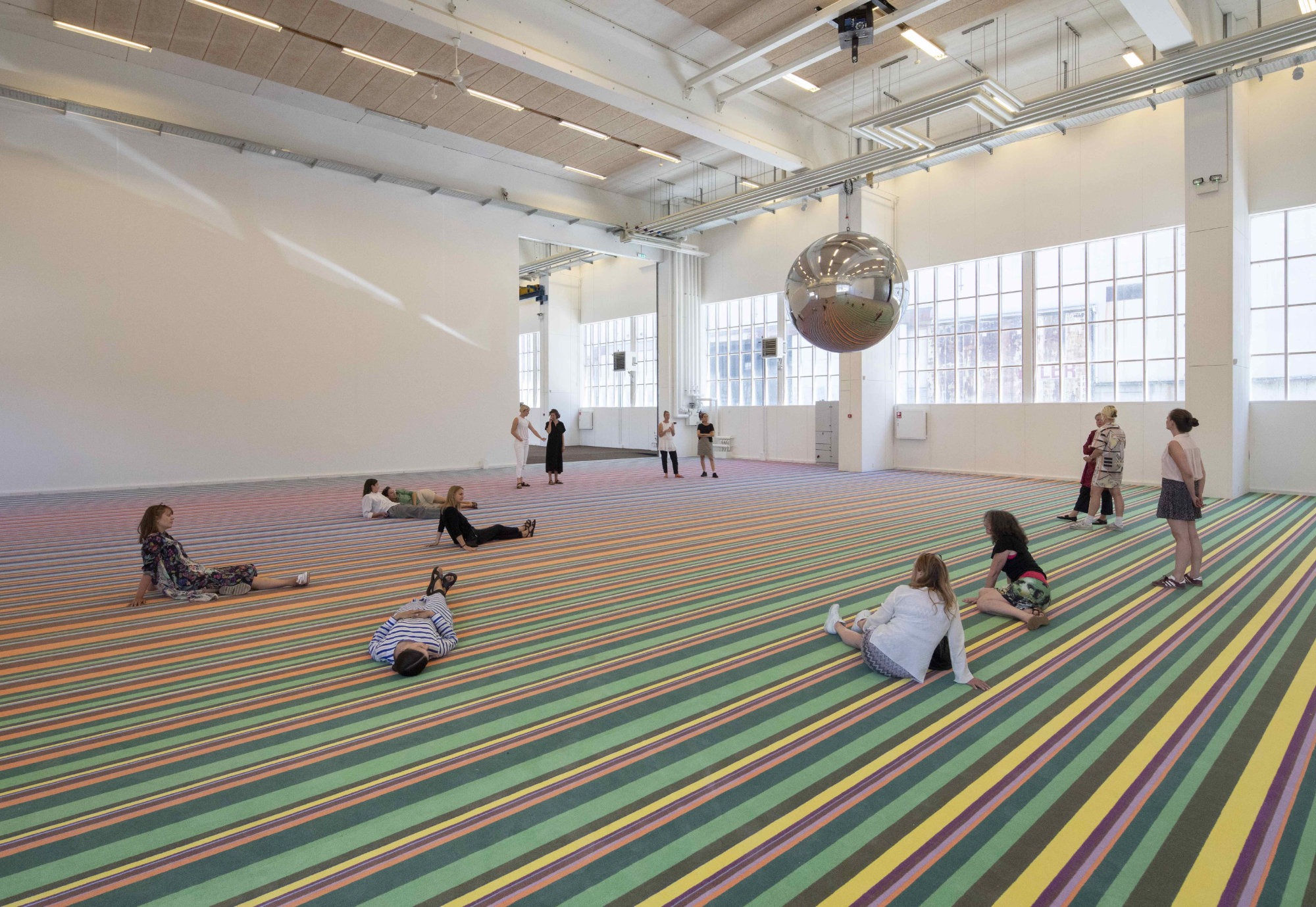 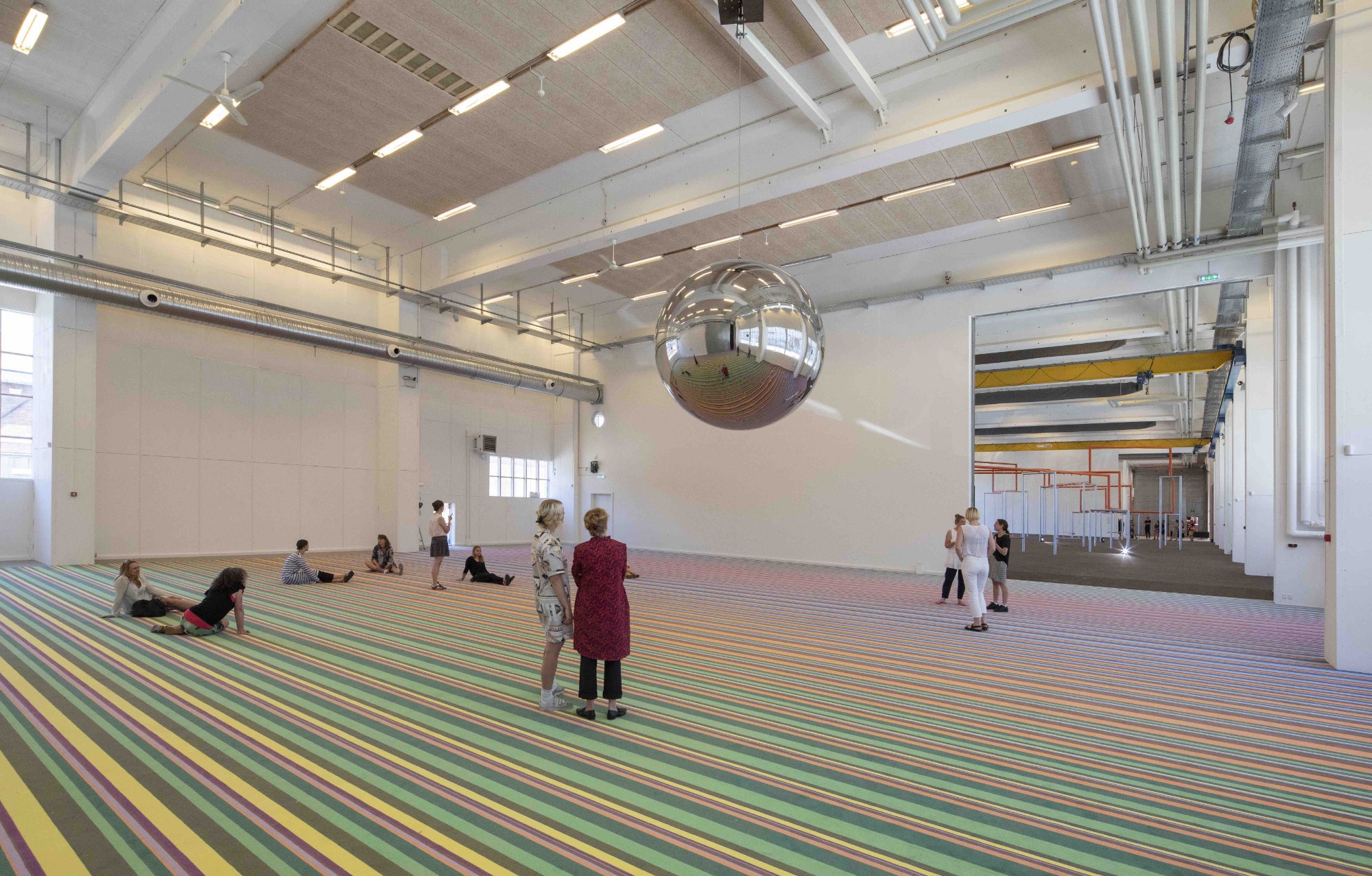 An orange line of swings weaves through SUPERFLEX ́ large-scale installation One Two Three Swing! The swings are designed for three people to swing together and experience the potential of collaborative participation.

Since the early 1990s, SUPERFLEX have created radically innovative works engaging with social issues. Right from the start, the artists’ collective has used its artistic practice to address social concerns and they actually refer to their projects as ‘tools’ capable of creating action and change.

With the large-scale installation One Two Three Swing! SUPERFLEX address what they experience as an apparent social apathy, an inability to act in the face of political, environmental, and economic challenges in our times – and they do so by emphasising the revolutionary potential of collective human actions and experiences.

In Hall 1, the audience can experience movement and the power of collective human action offered by the orange line of swings winding through the hall. Where swings are normally designed for individual use, SUPERFLEX ́ swings are designed with three seats and the audience is encouraged to experience the energy of several people swinging collectively.

In Hall 2, the state of apathy is represented by a large pendulum swinging widely across a carpet woven in the colours of Euro notes. The audience is invited to lie down and contemplate the fabric of economy and other forces governing our everyday lives, while literally reflecting on, while being reflected in, the mirror-like pendulum.

One Two Three Swing! is both an aesthetic and a conceptual installation inviting the audience to immerse themselves in a work engaging with the power of play and the collaborative entities people are capable of creating together. Swinging together with others is a very different experience to swinging on your own. SUPERFLEX see the collective potential emerging when people swing together as a positive energy, symbolically capable of changing the course of the planet and the path we, as a society, are following. The joint experience offered by the work may trigger reflections on fundamental issues like democracy, influence, and common citizenship – in that sense, SUPERFLEX ́ swings are more than just play.

One Two Three Swing! was created in 2017 for the huge Turbine Hall at Tate Modern in London where, in a recognition of their work, SUPERFLEX were selected as the recipients of the Hyundai Commission.

About Superflex
The Danish collective SUPERFLEX was established in 1993 by Jakob Fenger (b.1968), Bjørnstjerne Reuter Christiansen (b.1969), and Rasmus Nielsen (b.1969). They live and work in Copenhagen. SUPERFLEX have earned international acclaim for a practice engaging with art, design, and the economic structures of globalisation. Their works often balance on the verge of being works of art and functional objects. They have, amongst much else, created Supergas (1996), a biogas facility in Africa, Superchannel (2000), their own TV channel, Superkilen (2012), a public park in the Nørrebro district of Copenhagen, and Hospital Equipment (2017), a fully functional operating table used in hospitals in e.g. Gaza and Syria.
Among recent solo exhibitions are: Bundeskunsthalle, Bonn, Germany (2018), Tate Modern, London, England (2017), Von Bartha, S-chanf, Switzerland (2017), Hayward Gallery, London, England (2017), 21st Century Museum of Contemporary Art, Kanazawa, Japan (2016), Kunsthal Charlottenborg, Copenhagen (2013), Fundación Jumex, Mexico City, Mexico (2013), Van Abbemuseum, Eindhoven, the Netherlands (2010).
www.copenhagencontemporary.org