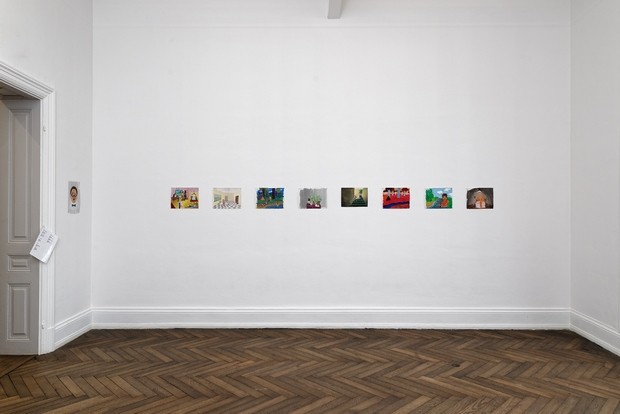 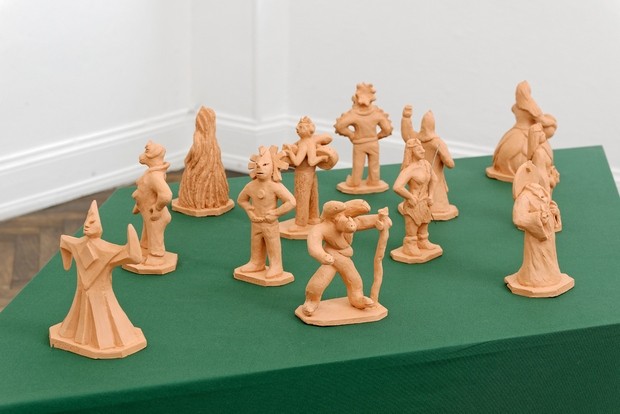 Trust in Fiction brings together fictional artists whose thoroughly real works, coming from a range of very different artistic, historical and political contexts, are encountering each other for the first time here in Altkirch.

The exhibition focuses on different conceptual and critical strategies enabling artists to develop a body of work by absorbing the subjectivity of invented authors. Freeing the artist from the constraints of space, time and genre, these strategies make possible the construction of an oeuvre at once hybrid, flexible and open-ended.

One strategy can consist in (re)inventing certain aspects of history. By introducing a fictive character into a given historical context – as The Atlas Group (Walid Raad) did with Doctor Fakhouri or Dora Longo Bahia with Marcelo do Campo and Marcelo Cidade – artists tend to broaden their spectrum of tools as a way of investigating historical figures and processes, thus giving tangible expression to narratives left latent, not to say directly censored or repressed.

Some artists even foreground the falsehood of the historical sources or contexts they invent. When Pedro Manrique Figueroa deliberately alters data with no effort to disguise the fact, the liberties he takes demonstrate on the one hand that history is an unstable product subject to the uncertainties of the imagination, and on the other that verifiable information may not be an essential resource.

The presence of Eleanora Antinova (Eleanor Antin) in Diaghilev’s Ballets Russes displaces the issues of gender and race discrimination into a historical space-time in which the problem was not raised publicly; opening up a new context for considering them.

Another strategy can involve preventing the artist’s univocal body from getting in the way of ideas. Thus Yoon Ja and Paul Devautour exit their own bodies to build up a metacollection of works by twenty-some «bodiless» artists whose many real concerns fuel a vast critical programme that uses fiction to deconstruct the art system on a scale of 1:1.

These fictional artists emerge in negative through their works, but they would not exist without biographies, however erratic and minimal. Without biography there can be no narrative, and without narrative, there can be no invented subjectivity. One of the ways of producing these biographies can be to legitimate minor or unknown artists and works. Thus Juan Trepadori, at least four of Marisa Rubio’s five personages, and Joaquim Nunes de Souza – amateurish, mediocre or simply unaware of their (relative) talent – would never have found a place in history if they had not become implicated in artistic operations which, in one way or another, exceed them.

One of these operations consists in infiltrating a real situation. Trepadori, Antinova and the artists created by Rubio or The Atlas Group exist on fictional planes very close to reality. So much so that their mission could be summed up as fostering the connections between these parallel planes and the real. Contrariwise, there are others who do not live under the limitations of our world frontiers, their visions being too different from ours. Euclides Terra, a ceramicist fascinated by myths and cosmic movements of energy, and René Garcia Atuq, whose concept of time defies our truths, have the ability to embody experimental systems of perception capable of serving as tools for thinking and acting.

If a fictive artist has the power to inhabit not only one but multiple fictional planes, might not this multiplicity inspire us to numerous forms of existence?
www.cracalsace.com