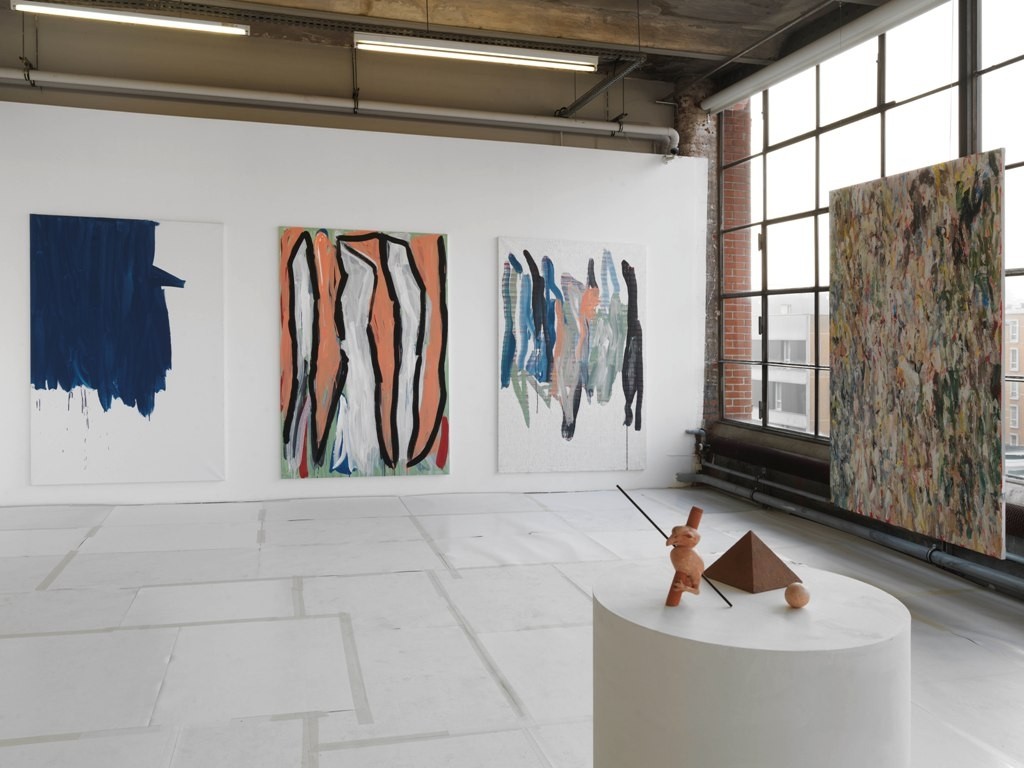 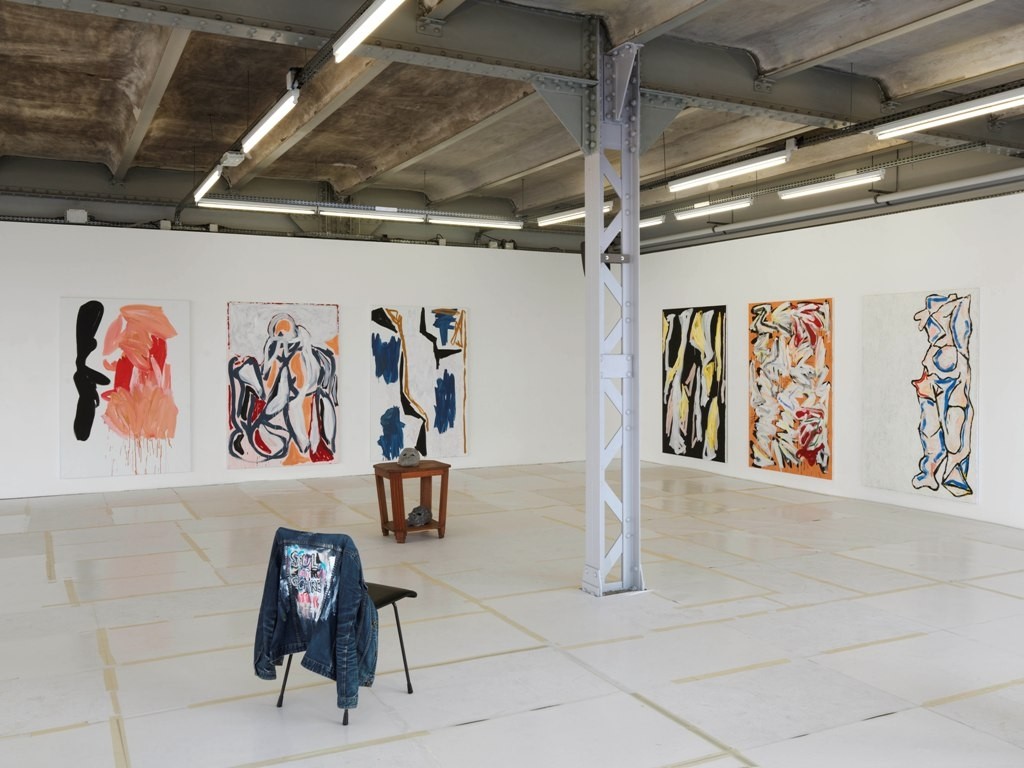 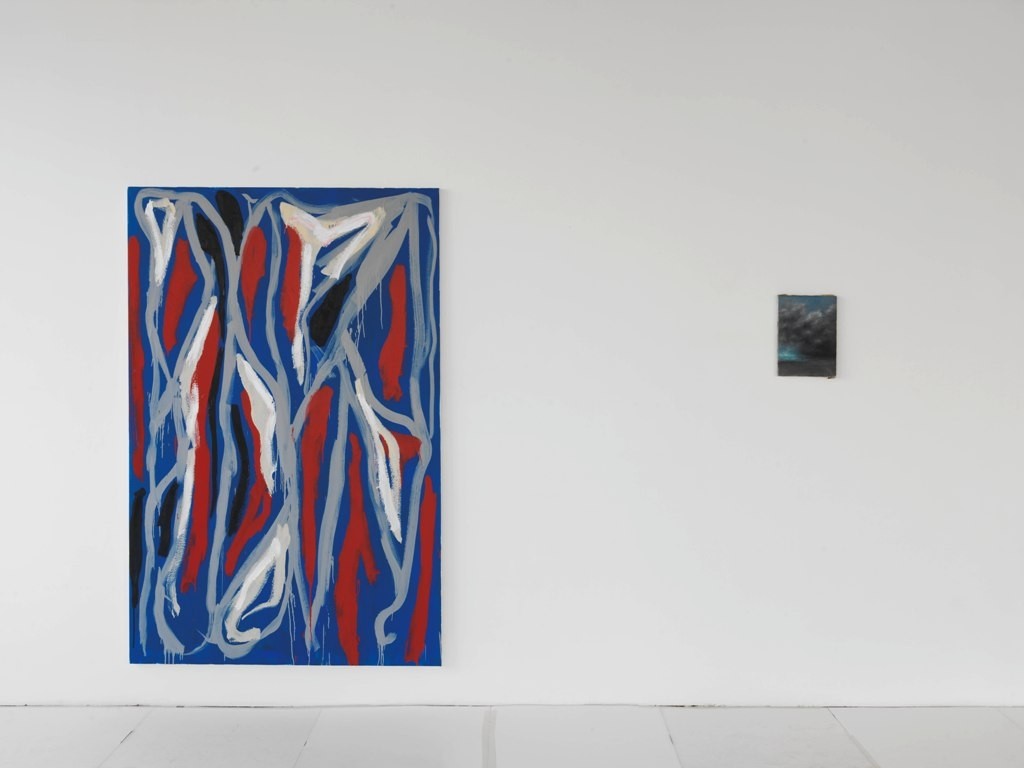 As an artist and curator, Corentin Canesson has dedicated his time to painting, music and curating. His practice adheres to various protocols that he imposes on himself as playful obsessions. He sees painting as a spontaneous pleasurable act through which he can summon mixed references to the history of 20th- and 21st-century art. For the current exhibition, he has done a series of abstract acrylic and oil paintings in a given format (195 x 130 cm), pointing to the gestures of Eugène Leroy, Bram Van Velde and Philip Guston.
Experiencing this uninhibited painting also involves a soundtrack, one created by his group, called The Night He Came Home. The album visitors hear was recorded for the show and each of the record sleeves is hand-painted by the artist himself; it plays in a loop in Crédac’s main gallery, which has been reimagined as a soundstage.

This “secondhand” painting—it should be read alongside the artist’s assimilation of painters he loves— doesn’t stop Canesson from engaging in true plastic experimentation and formal unity beyond the exercise of citing or reappropriating others’ work. The heritage in this case, designated and openly espoused, allows the artist to take over an area of painting that is already well established and clearly marked off while permitting the expression of a sincere and singular sensibility. In the teeming corpus of this highly prolific artist, certain periods, series, even whims stand out. For instance, there is the leitmotif of the bird (known to be inspired by both the naturalist paintings of the American ornithologist John James Audubon and the sculptures of the Finistère sculptor Jean Pierre Dolveck), which is often alone and hemmed in by the picture frame, stuck in layers and layers of paint that seem to weigh down on its movements. In 2015, following a residency at Les Chantiers, Canesson focused his solo show at the Passerelle Contemporary Art Center in Brest on the myth of Samson and Dalila. Both blocking and boosting communications beforehand, the artist himself painted the posters that were later placed in billboards around the city, conveying even before the show opened a range of visual translations of the Biblical story.

Retrospective My Eye: The title of both the show and the album is a straight-up homage to Robert Wyatt.
It comes from the words of Gharbzadegi, one of the pieces on Old Rottenhat, the fourth album, a solo, selfproduced work that the English musician brought out in 1985. The Night He Came Home—another reference, this time to John Carpenter’s 1978 film Halloween—is even a cover version; it can be heard in the show.

Biography —
Corentin Canesson was born in 1988 in Brest and lives and works in Paris. He graduated from the European
Academy of Art in Brittany – the Rennes campus in 2011. His work was recently featured at the Passerelle Contemporary Art Center in Brest, the Jean Brolly Gallery in Paris, CNEAI in Chatou, and the Palette Terre Gallery in Paris. Along with his art activities, he codirected the STANDARDS exhibition space in Rennes from 2008 to 2014, and has continued this experience at DOC, an art residency and exhibition space in Paris
www.credac.fr